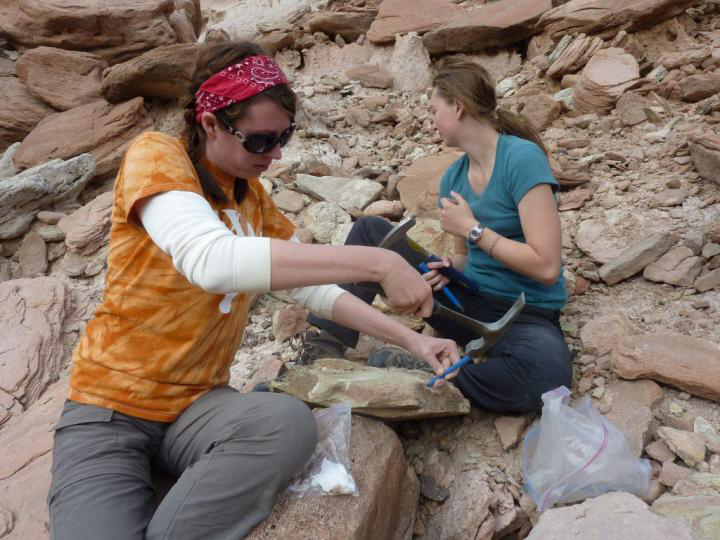 New fossil provides clarity to the history of Alligatoridae

Families are complicated. For members of the Alligatoridae family, which includes living caimans and alligators — this is especially true. They are closely related, but because of their similarity, their identification can even stump paleontologists.

But after the recent discovery of a partial skull, the caimans of years past may provide some clarity into the complex, and incomplete, history of its relatives and their movements across time and space.

Michelle Stocker, an assistant professor of vertebrate paleontology in Virginia Tech’s Department of Geosciences in the College of Science; Chris Kirk, of the University of Texas at Austin; and Christopher Brochu, of the University of Iowa, have identified a 42-million-year-old partial skull that may have belonged to one of the last prehistoric caimans to roam the United States.

“Any fossil that we find has unique information that it contributes to understanding the history of life,” said Stocker, who is an affiliated faculty member of the Fralin Life Sciences Institute and the Global Change Center. “From what we have, we are able to understand a little bit more about the evolutionary history of caimans and the alligatorid group, which includes alligators and caimans.”

Their findings were published in PeerJ, an open access peer-reviewed scientific mega journal covering research in the biological and medical sciences.

The fossil was discovered in 2010 at Midwestern State University’s Dalquest Desert Research Site, which includes extensive exposures of the Devil’s Graveyard Formation, a geologic formation in the Trans-Pecos volcanic field of West Texas.

The Devil’s Graveyard Formation preserves fossils from the latter portion of the Eocene epoch, a period of time covering 15 million years of prehistory.

In 2011, Stocker and the team returned to the site to collect a key bone that remained in the hard sandstone block that once encapsulated the caiman skull.

“The Devil’s Graveyard Formation provides a unique window into the evolution of North American vertebrates during the middle and late Eocene,” said Kirk. “There are a host of extinct species that are only known from the Devil’s Graveyard, including several primates, rodents, lizards, and now this new fossil caiman.”

What they discovered was a partial skull. At the time of the discovery, paleontologists were convinced that the skull came from a closer relative to alligators than to caimans.

“When you are at the early diversification of groups, their features aren’t as differentiable,” said Stocker. “It was harder to tell if this is more closely related to caimans or to alligators because those two are really closely related already. And the differences between them are subtle, especially early in their evolutionary history.”

The skull’s braincase was a key component in the identification of the fossil. The braincase encases and protects the brain from injury. Since no two species have the same braincase, finding one can provide some much needed information for paleontologists.

After further investigation into this fossil’s braincase, Stocker and the team were able to determine that this was, without a doubt, a caiman.

The caiman was deemed to be 42 million years old by using a combination of investigative techniques, including radiometric dating, biochronology, and biostratigraphy, where paleontologists use the relative order of the fossilized animals to find out how old the rocks are.

With the age of the fossil and its location in mind, paleontologists are able to add to an ever-growing story about a large biogeographic range contraction, or a climate-related extirpation, that occurred millions of years ago.

Roughly 56 million years ago, the planet was experiencing temperatures so hot and methane levels so high that no polar ice caps could form. For large cool-blooded reptiles like alligators and caimans, it was their time to thrive and soak up the sun. In fact, the conditions were so favorable that these early reptiles roamed as far north as northern Canada.

“The presence of a fossil caiman in the Devil’s Graveyard, about 1,200 kilometers north of where caimans are found today, really says something about how different the climate of West Texas was in the middle Eocene”, said Kirk.

But one epoch later, in the Oligocene, the entire world was experiencing cooler temperatures, forcing many species that require warm and humid conditions into more restricted geographic ranges.

Caiman populations, in particular, are now only found in South and Central America. Although, a small number of caimans have been found outside of this range and are thought to be invasive species.

“This caiman seems out of place,” said Brochu.”Caimans today are a South American radiation, and data from modern forms, including DNA, would suggest a very simple single origin from a North American ancestor. This new form, along with some older North American fossil caimans, suggests a far more complex early history with multiple crossings of the seaway that separated North and South America until fairly recently.”

There is even more to know about caiman history. Since the specimen was an incomplete skull, and far from a complete skeleton, paleontologists still have some knowledge gaps to fill about their relationships.

“If we can find another individual, we will get a better sense of its relationships, and it might be able to say something about what variation could be present in this taxon, or how they grow, or where else they might be found,” said Stocker. “This is a one-and-done kind of fossil right now. Hopefully there are more out there.”

The fossil will be housed at the Texas Vertebrate Paleontology Collections at the University of Texas at Austin where it will be preserved and maintained in perpetuity.

There is more research to be done on other fossils that have been retrieved from Central and South American specimens, as well. Those fossils, in particular, are critical for understanding the early southern record of caiman history and clearing up the morphological and chronologic gaps that currently exist in the caiman fossil record.

In the end, all that lies on the horizon is to do more fieldwork, collect more fossils, and conduct more study.

Without museums, this identification couldn’t have been possible. When paleontologists find new fossils, they must travel to museums, where they compare the new fossils with other specimens that have been collected.

Stocker maintains that the preservation and maintenance that museums do is just one reason that they need to be supported.

“Museums are important for science and for everybody who wants to understand our shared evolutionary history,” said Stocker. “And collaboration is the way that science moves forward.”