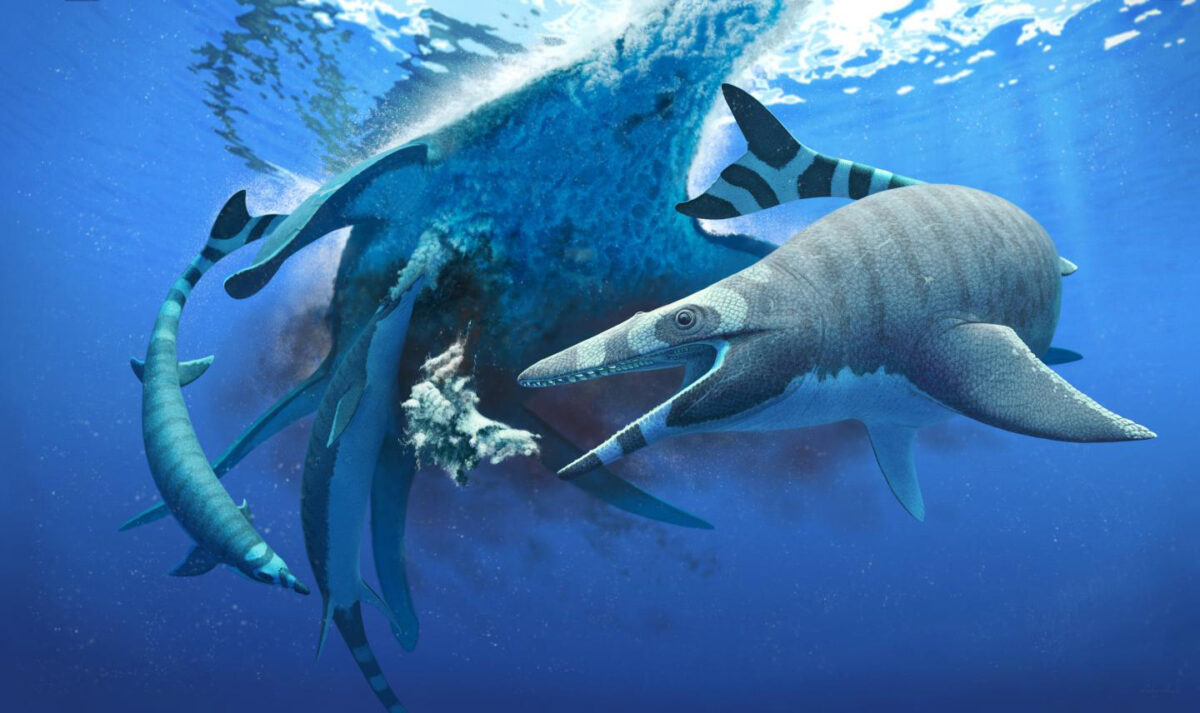 A new species of mosasaur – an ancient sea-going lizard

New study identifies a bizarre new species suggesting that giant marine lizards thrived before the asteroid wiped them out 66 million years ago.

A new species of mosasaur – an ancient sea-going lizard from the age of dinosaurs – has been found with shark-like teeth that gave it a deadly slicing bite.

Xenodens calminechari, from the Cretaceous of Morocco, had knifelike teeth that were packed edge to edge to make a serrated blade and resemble those of certain sharks. The cutting teeth let the small, agile mosasaur, about the size of a small porpoise, punch above its weight, cutting fish in half and taking large bites from bigger animals.

Dr Nick Longrich, Senior Lecturer at the Milner Centre for Evolution at the University of Bath and lead author on the paper, said: “66 million years ago, the coasts of Africa were the most dangerous seas in the world.

“Predator diversity there was unlike anything seen anywhere else on the planet. The new mosasaur adds to a rapidly growing list of marine reptiles known from the latest Cretaceous of Morocco, which at the time was submerged beneath a tropical sea.

“A huge diversity of mosasaurs lived here. Some were giant, deep-diving predators like modern sperm whales, others with huge teeth and growing up to ten meters long, were top predators like orcas, still others ate shellfish like modern sea otters – and then there was the strange little Xenodens.

“They coexisted with long-necked plesiosaurs, giant sea turtles, and saber-toothed fish. The new mosasaur adds another dangerous predator to the mix.”

The discovery also adds to the diversity of marine reptiles in the late Cretaceous. This suggests their diversity peaked just before an asteroid hit 66 million years ago, wiping out marine reptiles and the dinosaurs.

“We’re still learning how diverse the mosasaurs were,” said Longrich. “And whenever we think we have them figured out, another one turns up.”

The fauna lived in the million years before an asteroid hit the earth at the end of the Cretaceous period, ending the reign of the dinosaurs and wiping out 90 per cent or more of all species on Earth. The high diversity found in the new study suggests that the ecosystem wasn’t in decline before the asteroid hit; instead the ecosystem seems to suggest that marine reptiles were expanding in diversity before they abruptly went extinct.

The teeth seen in Xenodens are unlike those of any other reptile. But Dr Longrich, who worked on fishing boats growing up in Alaska, had seen something similar before.

He said: “It reminded me of the teeth in the jaws of the sleeper sharks we’d sometimes catch while fishing halibut on my brother’s boat. I remember seeing what those sharks could do- they’d carve huge bolts of flesh out of the halibut, almost cutting them in half.”

The authors suggest that, similar to sleeper sharks and related dogfish sharks, the unusual jaws allowed the animal to punch above its weight, cutting small fish in half, carving pieces out of larger prey, and perhaps even scavenging on the carcasses of large marine reptiles.

But rather than being an extreme specialist, the teeth probably let Xenodens eat a huge range of prey – “They’re like the knives sold on those old late night TV commercial- they’ll slice through anything,” said Longrich.

Anne Schulp, researcher at Naturalis Biodiversity Center in Leiden and Professor of Palaeontology at Utrecht University, and an author on the paper, said: “I’m blown away by the new discovery.

“I’ve been working on closely related mosasaurs for a decade or two now, and Xenodens shows this group managed to exploit yet another food source. They clearly were even more successful than we thought.”

Dr Nathalie Bardet from the National Museum of Natural History in Paris said: “I have been working on mosasaurs for over 20 years and more specifically on those from the Maastrichtian Phosphates of Morocco which I am familiar with. I must admit that among the ten species that I know, this one has a so unusual and extraordinary dentition that at the beginning I thought it was a ‘chimera’ reconstructed with different fossils!”

Dr Nour-Eddine Jalil of the National Museum of Natural History in Paris and Universite Cadi Ayyad in Marrakech, said: “A mosasaur with shark teeth is a novel adaptation of mosasaurs so surprising that it looked like a fantastic creature out of an artist’s imagination.

“It is as if nature is struggling to find all the combinations for an ever finer exploitation of food sources.”