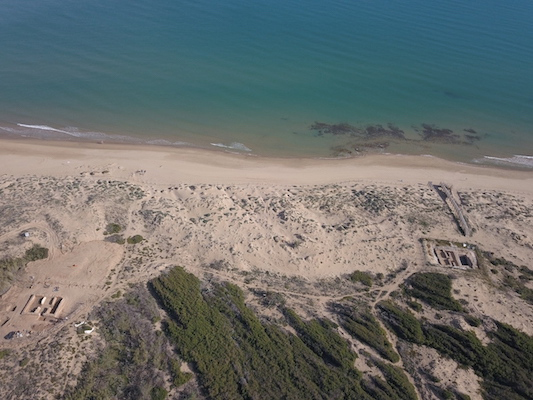 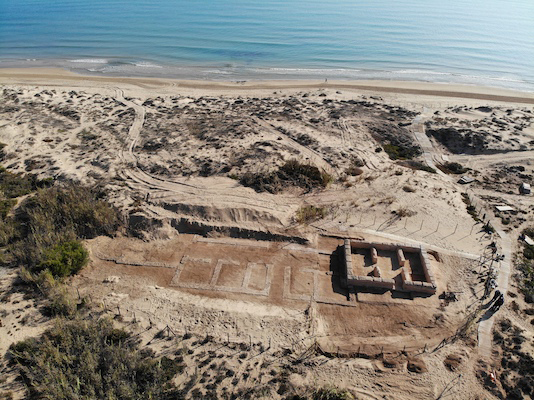 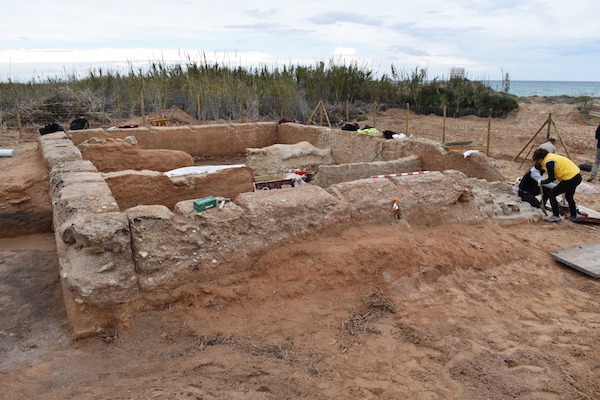 A Roman villa appears under an Islamic tower

Excavated on the beach of Guardamar del Segura

A Roman villa appears under an Islamic tower excavated on the beach of Guardamar del Segura within the project of the University of Alicante and the Town Hall of Guardamar.

The work done in 2020 reveals an exhaustive analysis of an underneath Roman phase, possibly a rustic residential villa.

The history of the ancient inhabitants of the lands of El Moncayo beach, on the coast of Guardamar del Segura in Alicante, is beginning to be drawn by a team of archaeologists who have been excavating since 2018. Only one hundred metres from the sea, and about three kilometres south of the centre of the current town, the past begins to write new lines with the discovery of an archaeological settlement made up of two clearly related sites. On the one hand, the Moncayo, a settlement as such, with a wide sequence of occupation between the 2nd and 11th centuries AD; and, on the other hand, the Torre del Descargador, an exempt structure from the 10th and 11th centuries, barely 135 metres away from the settlement and whose function could have been twofold: storage and surveillance.

In addition, the excavations in 2020 have concluded with a new finding: the appearance of a Roman villa under an Islamic tower.

The archaeological site in Moncayo-Torre del Descargador is part of a collaboration initiative between the Guardamar town council, the University of  Alicante Research Institute for Archaeology and Historical Heritage (INAPH), along with the Valencian government and the Provincial Coastal Service.

The aim of the project is scientific research (both from archaeology and construction), the consolidation and improvement of the environment using museum techniques for restoration and/or preservation of the archaeological remains of the complex that were partially documented by the Archaeological Museum of Guardamar (MAG) in 1998 and 2004.

The archaeological and architectural consolidation work is directed by a team made up by Antonio García Menárguez, former director of the MAG; Sonia Gutiérrez Lloret, Professor of Archaeology at the University of Alicante; Víctor Cañavate Castejón, archaeologist at the local council in Elche; and José Gambín Lorenzo, architect and building engineer from the Guardamar town hall. Also, the museum has the collaboration of restorer Begoña Movellán; pre-doctoral researchers Raquel Bujalante and José María Moreno, and the support of the Archaeological Museum of Guardamar.

The site covers many remains scattered along the coastal dune complex, with an extensive sequence of occupation going back to Roman times and reaching the Islamic period. At least two nuclei have been located in what must have been a more extensive site, some three hundred metres apart: the Moncayo itself (B.R.L.), where two phases of occupation of a Roman settlement have been documented with two different building periods (1st-4th and 5th-6th centuries); and a small superimposed mosque, similar to those found in the Caliphal Ribat of Guardamar; and the heritage asset of the Torre del Descargador in which part of a solid tapial structure was documented.

In 2018, work was carried out in the Moncayo area to document the complete plan of the oratory, restore, consolidate and fence the structures, as well as enhancing the restoration work. In November 2019, work began on the Torre del Descargador in collaboration with the Regional Ministry. The first phase consisted of a complete excavation of the inner part of the tower and its access to document the sequence and restore the most deteriorated corner. According to Sonia Gutiérrez, the discovery of new structures during the fencing made it necessary to carry out a second action in the surroundings and the levels underneath, which had to be postponed until the autumn of 2020 due to the health emergency and the environmental conditions.

These new works, in addition to documenting the full plan of the medieval structure and confirming its chronology (late 10th to mid 11th century), have made it possible to back up with documentary evidence an extensive Roman phase that was underdeveloped, similar to that already described under the Moncayo Mosque. This phase corresponds to a Roman residential building, possibly part of a rustic villa, whose foundations form a complex and axial plan, made up a number of quadrangular rooms lined up along a wide corridor facing the sea, topped by two large absided rooms. The UA professor explained how these large rooms with curved headrests are characteristic of 4th century villas, being used for representative and social functions such as the triclinium (room for banquets), and the tablinum (owner’s office), or sometimes the balnea, i.e., bathroom buildings, yet with no evidence of such use.

However, in the current state of our work and while waiting to continue in both sectors of the site, Gutiérrez stated that there must have been a rustic Roman villa on the beach at El Moncayo, possibly with a dispersed structure. There, two phases of productive use have been documented (high and low-imperial) in the area of El Moncayo, and a possible residential space of low-imperial typology in El Descargador. After a period of abandonment and systematic despoilment, a settlement from the Caliphate and Taifa periods was established on its ruins, of which a small mosque and a solid fortified structure (tower-warehouse) remain, which was built using the walls of one of the large Roman rooms as a foundation. We still do not know for sure the extent of both settlements, their nature and economic functionality, as well as the activities that took place there, such as agricultural, fishing, salting or salt production and transformation. However, the questions raised by this important discovery are exciting and the continuation of the work in this marvellous setting opens up very interesting expectations of knowledge and appreciation of this heritage from Guardamar.

The structures have been consolidated and preserved, with a lightweight hunting fence, geotextiles, arlites and gravels of different textures and colours, as well as explanatory panels, to allow visits and understanding of the archaeological area of El Moncayo-Descargador. The asset is thus integrated into a site of great environmental value and in the project Memoria de Arena. Historia de Guardamar, promoted by the town council, combining research and transfer.