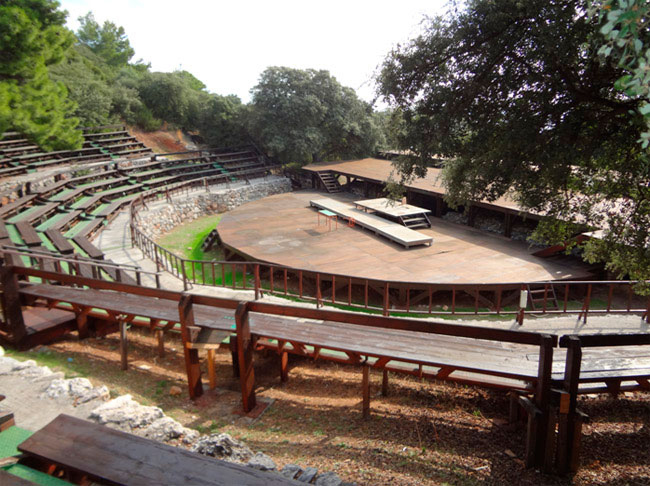 Last week President of the DIAZOMA Association, Stavros Benos, together with Vice President of the Association and Professor Emeritus of Classical Archaeology Petros Themelis, visited the ancient theatre of Samos. The aim of the visit was to be updated about the conservation status of the monument and examine the possibility of its promotion.

The theatre is built on the slope of Monastery of Panagia Spiliani at the Pythagoreion of Samos. A few remains came to light from the theatre. It was constructed during the Roman era and apparently consisted of a koilon, an orchestra and a scene.

Since 1996, when the site was excavated and then covered over again, a wooden structure with tiers and an orchestra was erected, a decision made by the Ministry of Culture. The project was funded by the Archaeological Receipts Fund. Today, one can see this structure which has a capacity of 750 people. The wooden structure’s design, that was built after the Central Archaeological Council has approved it, shows respect towards the monument, is well adapted to the natural environment and promotes not only the monument but also its surrounding area. Nevertheless, it should be substituted by a new, portable one, made of a better quality wood; the new structure will be stored away during winter, in order to be protected.

On the occasion of their visit at the ancient theatre, Mr. Benos and Mr. Themelis also visited the ancient quarries located at the Kastro Hill. There are approximately 45 quarries, where in antiquity stones were extracted for the construction of big building projects in the area.

After the visit, the officials said the creation of an archaeological park at the Pythagoreion was imperative. The local authorities have already made similar proposals about a park containing various archaeological routes passing though all important ancient monuments of the area, among which the Eupalinus Tunnel, the Agiades well, the ancient walls of Polykrates at Kastro, the Monastery of Aghia Triada, the ancient underground quarries, the water bridge of the Roman aqueduct, the rock-cut tombs, the open air sanctuary of Cybele, the Early Christian cemetery, the Basilica of Panagitsa with the colored mosaic floors, the Temple of Artemis, the Early Christian basilica – “Tria Dontia”, the Roman thermal baths, the Geometric cemetery, the Monastery of Panagia Spiliani, the ancient theatre, the ancient cistern, the Roman villa with the mosaics and the Hellenistic building with the “lion-griffins”.

In this framework, the creation of a coffer (a special bank account for the ancient theatre and the archaeological park of Samos) was decided, so that the money collected can be used for the project.