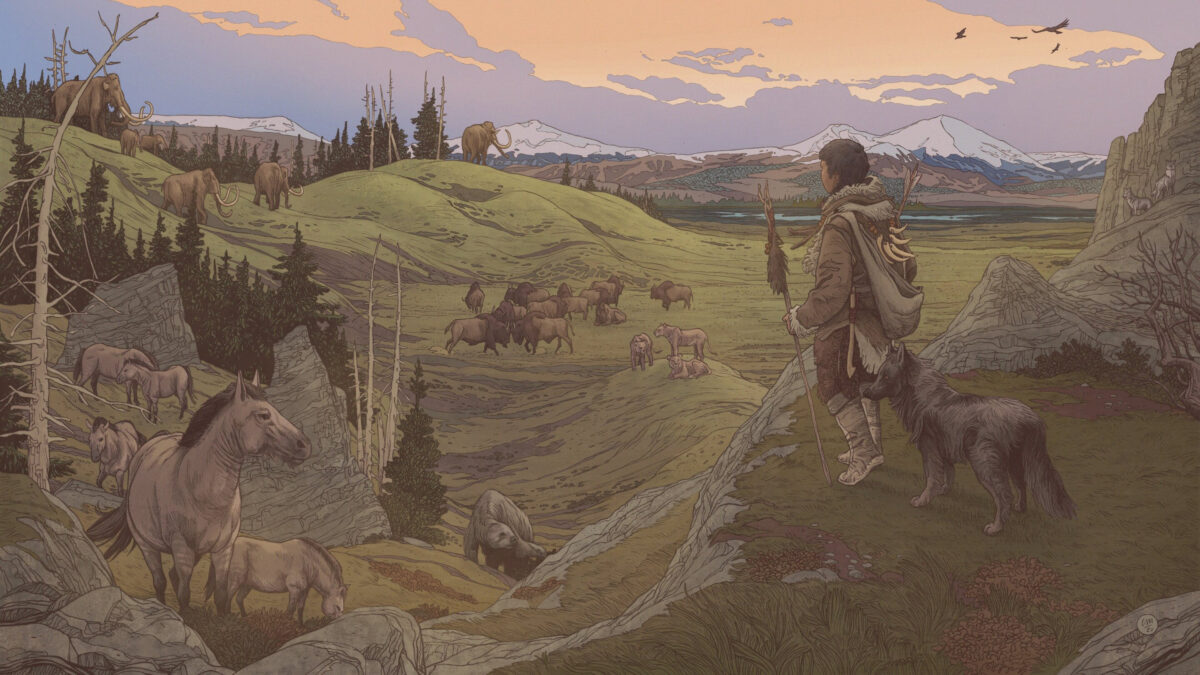 The first people to settle in the Americas likely brought their own canine companions with them, according to new research which sheds more light on the origin of dogs.

An international team of researchers led by archaeologist Dr Angela Perri, of Durham University, UK, looked at the archaeological and genetic records of ancient people and dogs.

They found that the first people to cross into the Americas before 15,000 years ago, who were of northeast Asian descent, were accompanied by their dogs.

The researchers say this discovery suggests that dog domestication likely took place in Siberia before 23,000 years ago. People and their dogs then eventually travelled both west into the rest of Eurasia, and east into the Americas.

The findings are published in the journal Proceedings of the National Academy of Sciences of the United States of America (PNAS).

The Americas were one of the last regions in the world to be settled by people. By this same time, dogs had been domesticated from their wolf ancestors and were likely playing a variety of roles within human societies.

Research lead author Dr Angela Perri, in the Department of Archaeology at Durham University, said: “When and where have long been questions in dog domestication research, but here we also explored the how and why, which have often been overlooked.

“Dog domestication occurring in Siberia answers many of the questions we’ve always had about the origins of the human-dog relationship.

“By putting together the puzzle pieces of archaeology, genetics and time we see a much clearer picture where dogs are being domesticated in Siberia, then disperse from there into the Americas and around the world.”

Geneticist and co-author Laurent Frantz (Ludwig Maximilian University of Munich) said: “The only thing we knew for sure is that dog domestication did not take place in the Americas.

“From the genetic signatures of ancient dogs, we now know that they must have been present somewhere in Siberia before people migrated to the Americas.”

Co-author Professor Greger Larson, Oxford University, said: “Researchers have previously suggested that dogs were domesticated across Eurasia from Europe to China, and many places in between.

“The combined evidence from ancient humans and dogs is helping to refine our understanding of the deep history of dogs, and now points toward Siberia and Northeast Asia as a likely region where dog domestication was initiated.”

During the Last Glacial Maximum (from ~23,000-19,000 years ago) Beringia (the land and maritime area between Canada and Russia), and most of Siberia, was extremely cold, dry, and largely unglaciated.

The harsh climatic conditions leading up to, and during this period may have served to bring human and wolf populations into close proximity given their attraction to the same prey.

This increasing interaction, through mutual scavenging of kills from wolves drawn to human campsites, may have began a relationship between the species that eventually led to dog domestication, and a vital role in the populating of the Americas.

As co-author and archaeologist David Meltzer of Southern Methodist University (Dallas, TX) notes, “We have long known that the first Americans must have possessed well-honed hunting skills, the geological know-how to find stone and other necessary materials and been ready for new challenges.

“The dogs that accompanied them as they entered this completely new world may have been as much a part of their cultural repertoire as the stone tools they carried.”

Since their domestication from wolves, dogs have played a wide variety of roles in human societies, many of which are tied to the history of cultures worldwide.

Future archaeological and genetic research will reveal how the emerging mutual relationship between people and dogs led to their successful dispersal across the globe.