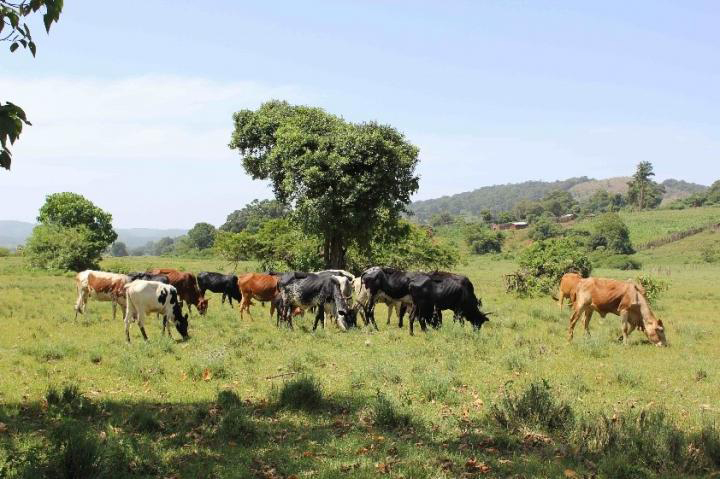 Tracking milk drinking in the ancient past is not straightforward. For decades, archaeologists have tried to reconstruct the practice by various indirect methods. They have looked at ancient rock art to identify scenes of animals being milked and at animal bones to reconstruct kill-off patterns that might reflect the use of animals for dairying. More recently, they even used scientific methods to detect traces of dairy fats on ancient pots. But none of these methods can say if a specific individual consumed milk.

Now archaeological scientists are increasingly using proteomics to study ancient dairying. By extracting tiny bits of preserved proteins from ancient materials, researchers can detect proteins specific to milk, and even specific to the milk of particular species.

Where are these proteins preserved? One critical reservoir is dental calculus – dental plaque that has mineralized and hardened over time. Without toothbrushes, many ancient people couldn’t remove plaque from their teeth, and so developed a lot of calculus. This may have led to tooth decay and pain for our ancestors but it also produced a goldmine of information about ancient diets, with plaque often trapping food proteins and preserving them for thousands of years.

Now, an international team led by researchers at the Max Planck Institute for the Science of Human History in Jena, Germany and the National Museums of Kenya (NMK) in Nairobi, Kenya have analyzed some of the most challenging ancient dental calculus to date. Their new study, published in Nature Communications, examines calculus from human remains in Africa, where high temperatures and humidity were thought to interfere with protein preservation.

The team analyzed dental calculus from 41 adult individuals from 13 ancient pastoralist sites excavated in Sudan and Kenya and, remarkably, retrieved milk proteins from 8 of the individuals.

The positive results were greeted with enthusiasm by the team. As lead author Madeleine Bleasdale observes, “some of the proteins were so well preserved, it was possible to determine what species of animal the milk had come from. And some of the dairy proteins were many thousands of years old, pointing to a long history of milk drinking in the continent.”

The earliest milk proteins reported in the study were identified at Kadruka 21, a cemetery site in Sudan dating to roughly 6,000 years ago. In the calculus of another individual from the adjacent cemetery of Kadruka 1, dated to roughly 4,000 years ago, researchers were able to identify species-specific proteins and found that the source of the dairy had been goat’s milk.

“This the earliest direct evidence to date for the consumption of goat’s milk in Africa,” says Bleasdale. “It’s likely goats and sheep were important sources of milk for early herding communities in more arid environments.”

The team also discovered milk proteins in dental calculus from an individual from Lukenya Hill, an early herder site in southern Kenya dated to between 3,600 and 3,200 years ago.

“It seems that animal milk consumption was potentially a key part of what enabled the success and long-term resilience of African pastoralists,” observes coauthor Steven Goldstein.

As research on ancient dairying intensifies around the world, Africa remains an exciting place to examine the origins of milk drinking. The unique evolution of lactase persistence in Africa, combined with the fact that animal milk consumption remains critical to many communities across the continent, makes it vital for understanding how genes and culture can evolve together.

Normally, lactase – an enzyme critical for enabling the body to fully digest milk – disappears after childhood, making it much more difficult for adults to drink milk without discomfort. But in some people, lactase production persists into adulthood – in other words these individuals have ‘lactase persistence.’

In Europeans, there is one main mutation linked to lactase persistence, but in different populations across Africa, there are as many as four. How did this come to be? The question has fascinated researchers for decades. How dairying and human biology co-evolved has remained largely mysterious despite decades of research.

By combining their findings about which ancient individuals drank milk with genetic data obtained from some of the ancient African individuals, the researchers were also able to determine whether early milk drinkers on the continent were lactase persistent. The answer was no. People were consuming dairy products without the genetic adaptation that supports milk drinking into adulthood.

This suggests that drinking milk actually created the conditions that favoured the emergence and spread of lactase persistence in African populations. As senior author and Max Planck Director Nicole Boivin notes, “This is a wonderful example of how human culture has – over thousands of years – reshaped human biology.”

But how did people in Africa drink milk without the enzyme needed to digest it? The answer may lie in fermentation. Dairy products like yogurt have a lower lactose content than fresh milk, and so early herders may have processed milk into dairy products that were easier to digest.

Critical to the success of the research was the Max Planck scientists’ close partnership with African colleagues, including those at the National Corporation of Antiquities and Museums (NCAM), Sudan, and long-term collaborators at the National Museums of Kenya (NMK). “It’s great to get a glimpse of Africa’s important place in the history of dairying,” observes coauthor Emmanuel Ndiema of the NMK. “And it was wonderful to tap the rich potential of archaeological material excavated decades ago, before these new methods were even invented. It demonstrates the ongoing value and importance of museum collections around the world, including in Africa.”