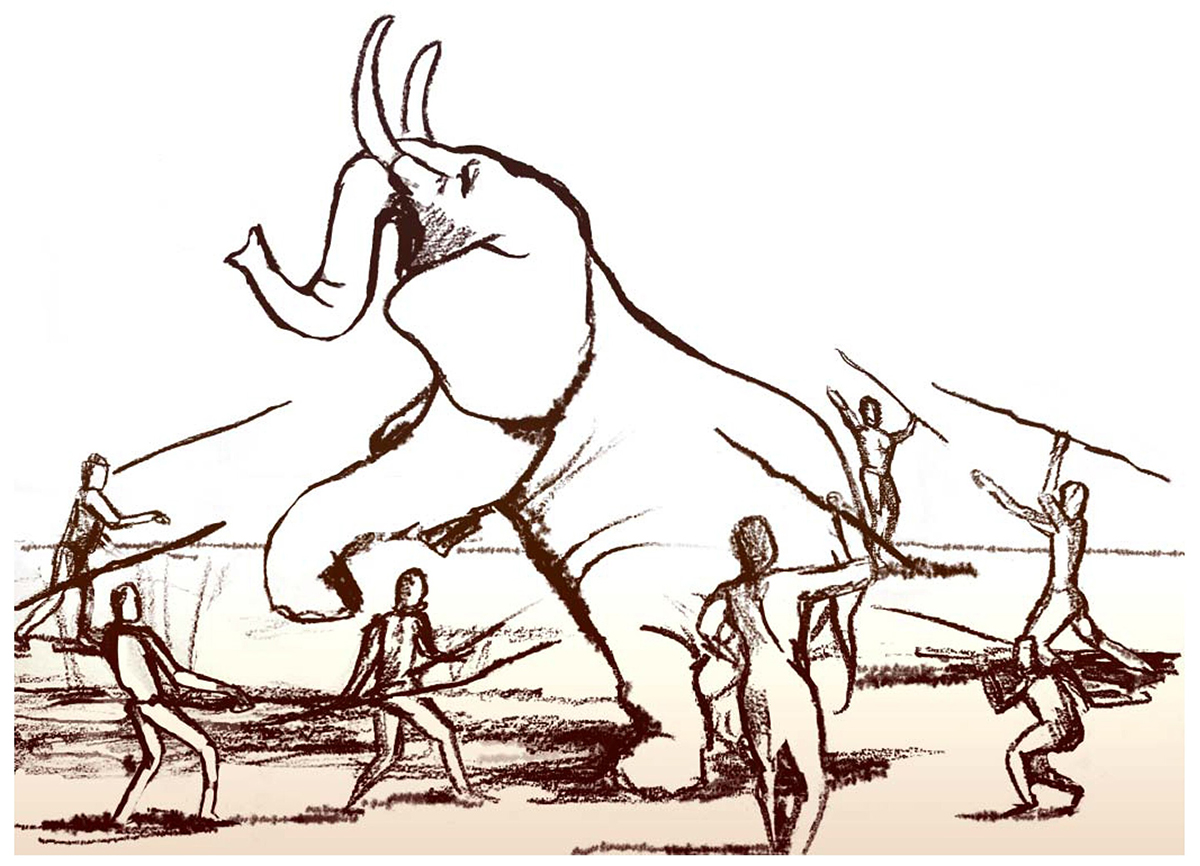 A novel theory explaining the evolution of the human species

A new paper by Dr. Miki Ben-Dor and Prof. Ran Barkai from the Jacob M. Alkow Department of Archaeology at Tel Aviv University, published in Quaternary Journal, proposes a novel theory for the physiological, behavioral and cultural evolution of the human species, from its first appearance about two million years ago, to the agricultural revolution (around 10,000 BCE).

In recent years more and more evidence has been accumulated to the effect that humans were a major factor in the extinction of large animals, and consequently had to adapt to hunting smaller game, first in Africa and later in all other parts of the world. According to the paper, humans developed as hunters of large animals, causing their ultimate extinction. Adapting to hunting small, swift prey animals, humans were forced to display cunning and boldness, thus developed higher cognitive abilities, evidenced by the growth of brain volume from 650cc to 1,500cc.

In Africa, 2.6 million years ago, when humans first emerged, the average size of land mammals was close to 500kg. Just before the advent of agriculture this figure had decreased by over 90% – down to several tens of kg.

According to the researchers, the decrease in the size of game and the need to hunt small, swift animals brought about an evolutionary process that demanded increased volume of the human brain and later led to the development of language enabling the exchange of information about where prey could be found.

The theory claims that all means served one end: body energy conservation.

The researchers show that, throughout most of their evolution, early humans were apex (top) predators, specializing in hunting large game. Representing most of the biomass available for hunting, these animals provided humans with high fat levels, an essential source of energy, and enabled a higher energy return than small game.

In the past, six different species of elephants lived in Africa, comprising more than half of the biomass of all herbivores hunted by humans. Initial evidence from East Africa indicates that homo sapiens only emerged in that area after a significant decline in the number of elephant species in certain regions. Comparing the size of animals found in archaeological cultures, representing different species of humans in east Africa, southern Europe and Israel, the researchers found that in all cases there was a significant decline in the prevalence of animals weighing over 200kg, coupled with an increase in the volume of the human brain.

“We correlate the increase in human brain volume with the need to become smarter hunters,” explains Dr. Ben-Dor. For example, the need to hunt dozens of gazelles instead of one elephant generated prolonged evolutionary pressure on the brain functions of humans, who were now using up much more energy in both movement and thought processes. Hunting small animals, that are constantly threatened by predators and therefore very quick to take flight, requires a physiology adapted to the chase as well as more sophisticated hunting tools. Cognitive activity also rises as fast tracking requires fast decision-making, based on phenomenal acquaintance with the animals’ behavior – information that needs to be stored in a larger memory.”

The evolutionary adaptation of humans was very successful,” says Dr. Ben-Dor. “As the size of animals continued to decrease, the invention of the bow and arrow and domestication of dogs enabled more efficient hunting of medium-sized and small animals – until these populations also dwindled. Toward the end of the Stone Age, as animals became even smaller, humans had to put more energy into hunting than they were able to get back. Indeed, this is when the Agricultural Revolution occurred, involving the domestication of both animals and plants. As humans moved into permanent settlements and became farmers, their brain size decreased to its current volume of 1300-1400cc. This happened because, with domesticated plants and animals that don’t take flight, there was no more need for the allocation of outstanding cognitive abilities to the task of hunting.”

According to Prof. Barkai “while the chimpanzee’s brain, for example, has remained stable for 7 million years, the human brain grew threefold, reaching its greatest size about 300,000 years ago. In addition to brain volume, evolutionary pressure caused humans to use language, fire and sophisticated tools such as bow and arrow, adapt their arms and shoulders to the tasks of throwing and hurling and their bodies to the prolonged chase, improve their stone tools, domesticate dogs and ultimately also domesticate the game itself and turn to agriculture.”

Prof. Barkai adds: “It must be understood that our perspective is not deterministic. Humans brought this trouble upon themselves. By focusing on hunting the largest animals, they caused extinctions. Wherever humans appeared – whether homo erectus or homo sapiens, we see, sooner or later, mass extinction of large animals. Dependence on large animals had its price. Humans undercut their own livelihood. But while other species, like our cousins the Neanderthals, became extinct when their large prey disappeared, homo sapiens decided to start over again, this time relying on agriculture.”