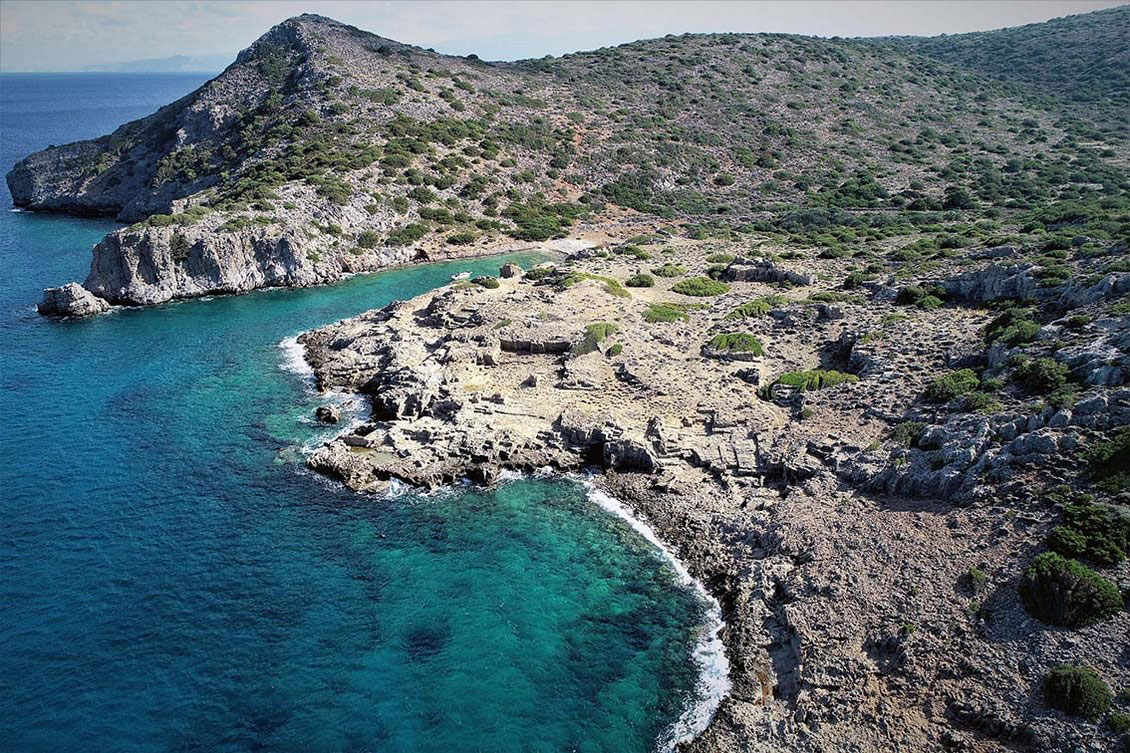 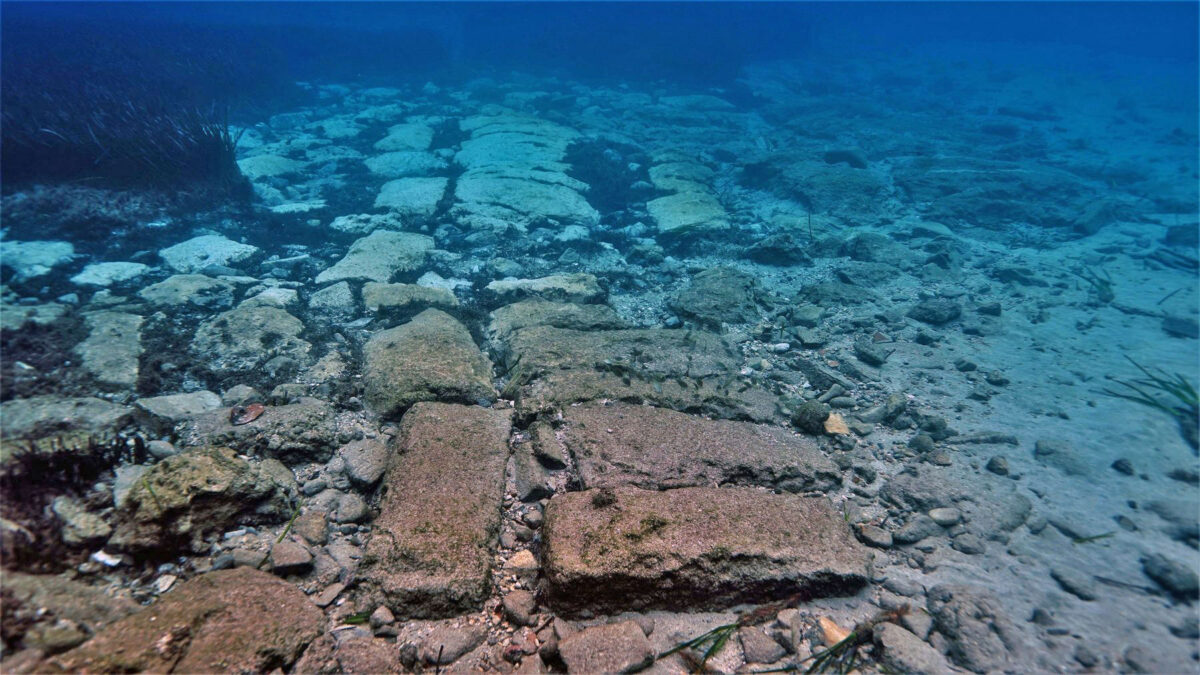 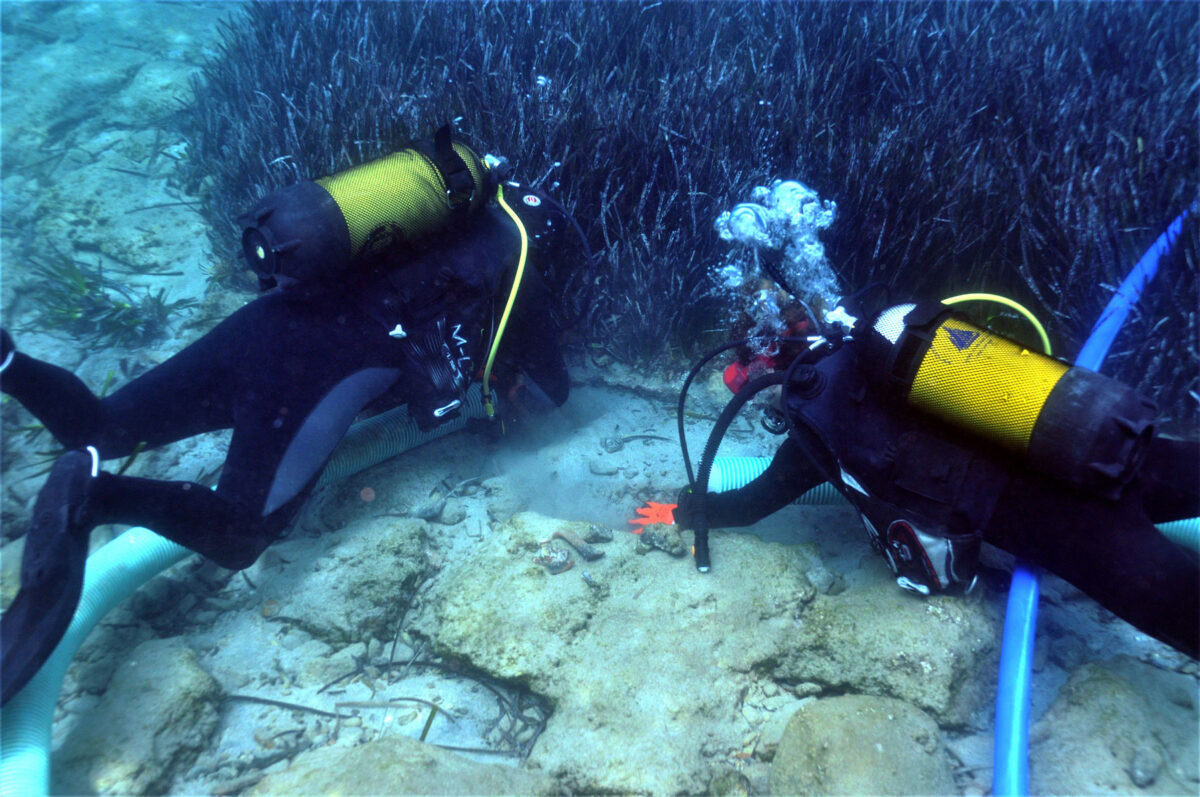 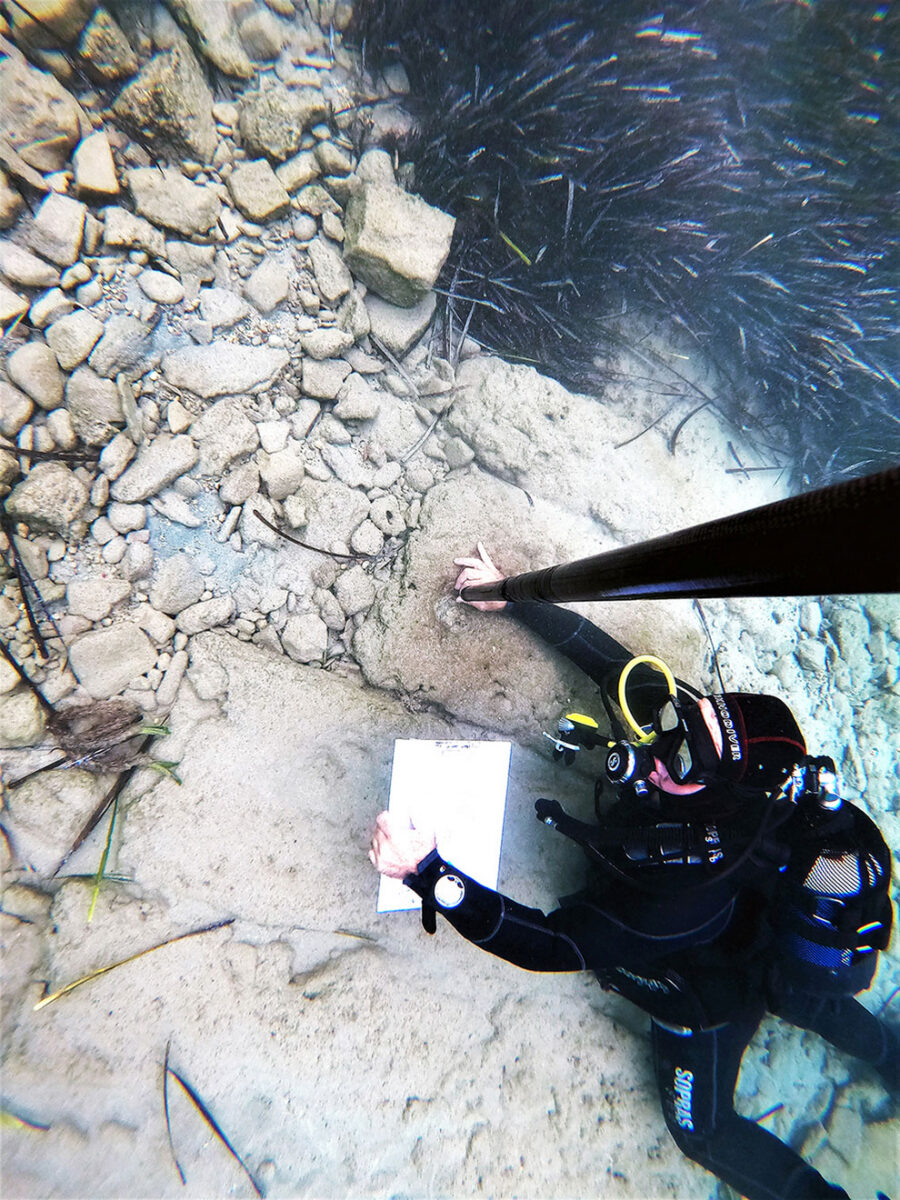 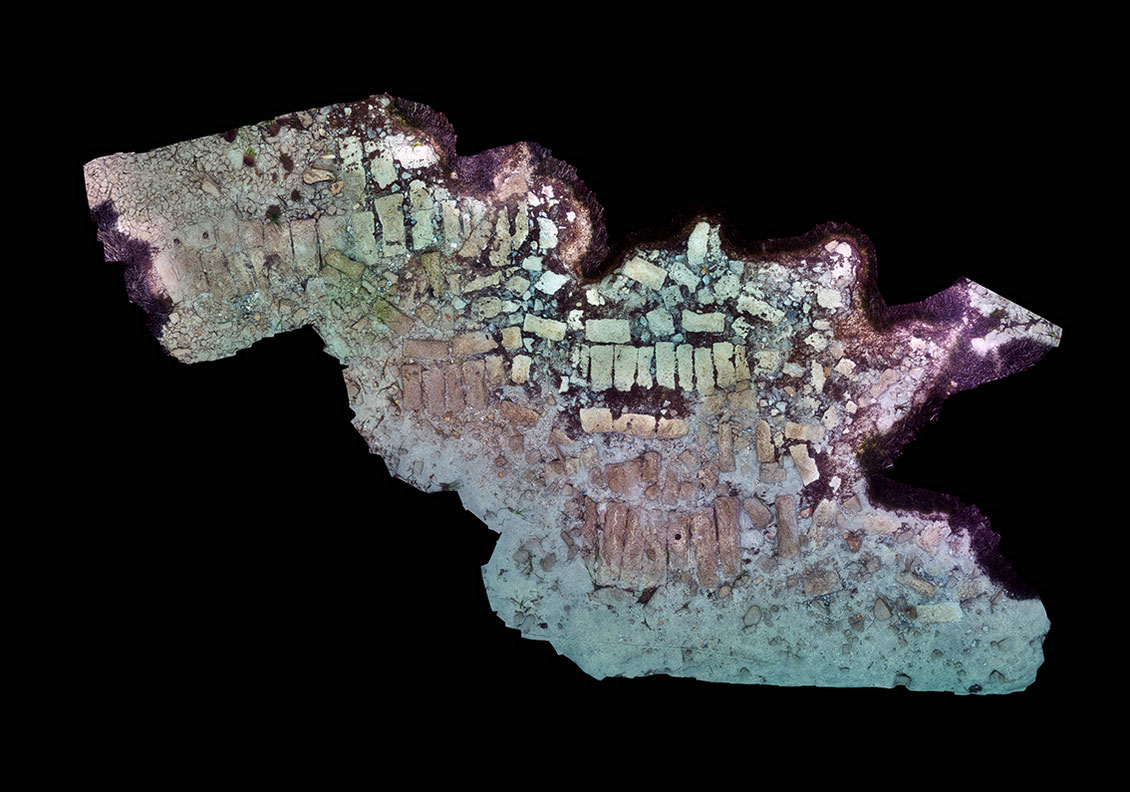 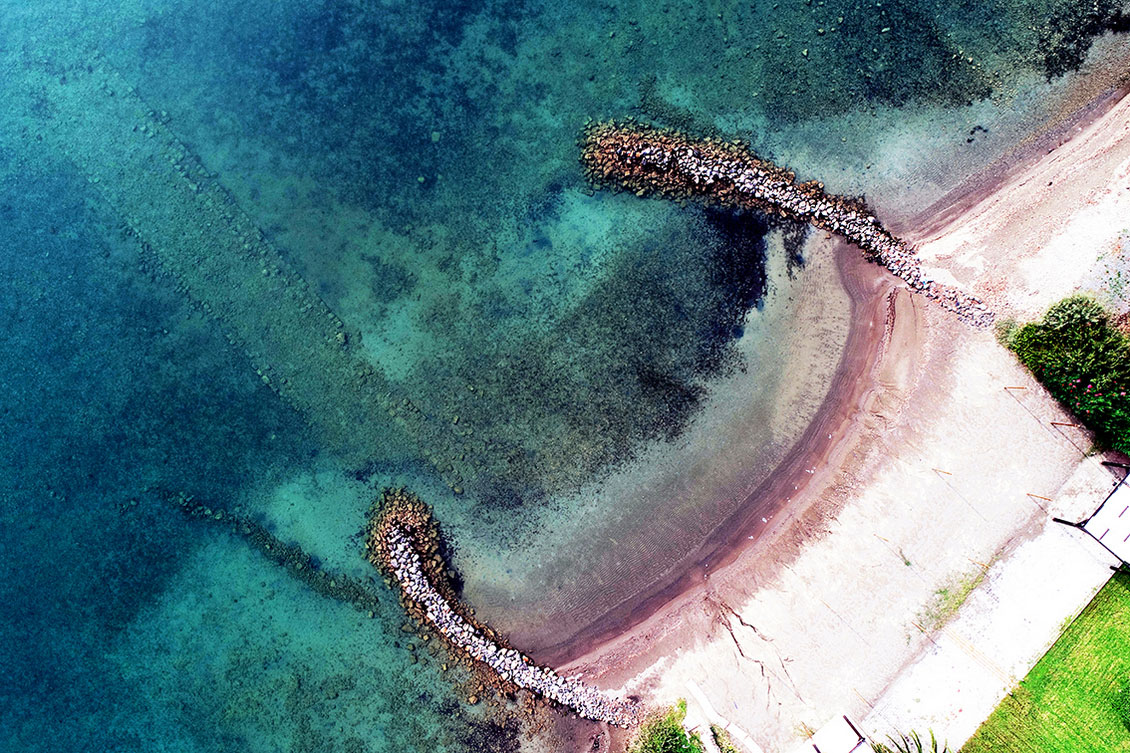 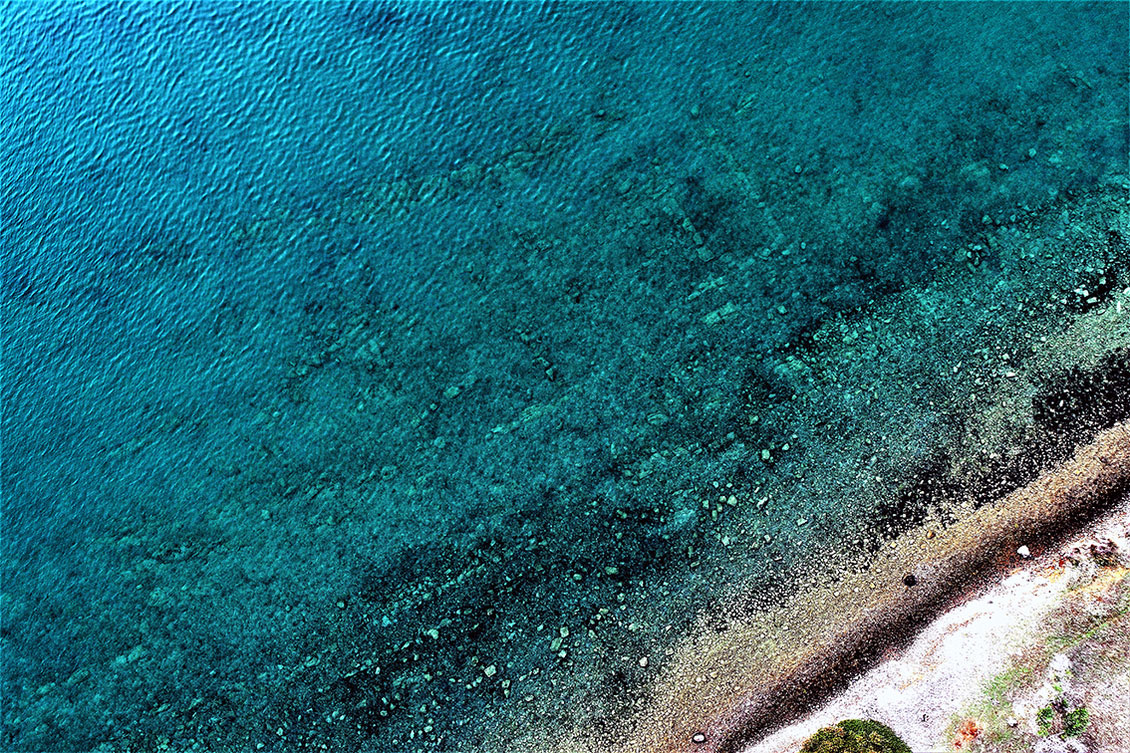 For the fourth year running, an archaeological team from the Ephorate of Underwater Antiquities, a team of geophysicists from the Satellite Remote Sensing Laboratory of the Institute of Mediterranean Studies (Foundation for Research and Technology –Hellas, FORTH), volunteer divers and scientists from other specialties, continued exploring and mapping evidence of the sunken city of ancient Olous and its territory, in the Elounda Bay, Crete.

Once again this year the interest was focused mainly on the region of Poros. Specifically, the surface clearing of sand and vegetation continued beyond a large elongated structure that probably belongs to the wall of the ancient city, although it cannot be ruled out as a breakwater. The fact that only the upper facade of the stone blocks and not the whole area is visible on the seabed, makes it necessary to uncover all the structure’s surface and carry out trial excavation trenches to determine its shape and consequently its use.

At the same time, the mapping continued, both underwater and from the air, of submerged ancient structures belonging either to buildings or other constructions, and there is an ongoing digital processing of gathered data for drawings and three-dimensional representations, which will then be fed into the (GIS) geospatial database to better understand how the above relate to each other.

In the same region north and south of the Poros Isthmus, the Institute of Mediterranean Studies continued a geophysical survey of the seabed substrate, applying electrical and magnetic resonance imaging. This method documents the existence of ancient structures beneath the seabed, reaching a depth of up to 1.5 m. The application of the method in specific sites also helps interpret structures, parts of which are visible on the surface.

Beyond Poros, the underwater research continued in the bay of Krios, east of the Kolokytha Peninsula, where scattered pottery was found, evidence that the bay was used for anchorage. The section of the peninsula, opposite the islet of Spinalonga, up to the bay of Vathi, on the west side of Kolokytha, was also explored with similar results. Ιn the previous years, a submerged building complex was mapped and documented in Vathi bay, while on the beach, a spring of water, now brackish, was located along with Minoan ceramics mixed with numerous purpura shells.

Opposite the bay, in the Tsifliki region, sunken remains of buildings and an elongated construction, known to the locals as a road, were found and mapped from the air. The road is very similar to the traditional paths in Kolokytha, with dry stone walls on either side, which most probably correspond to the ancient roads that led to the bays with the now sunken building complexes.

Composing present data with that of previous years, in combination with studying the sources and the results of earlier salvage or systematic archaeological research in the greater area, will gradually clarify the picture of the ancient city and its territory.

The following archaeologists took part in the expedition: Dr. Theotokis Theodoulou, Dr. Georgios Tsiboukis, Dr. Alexandros Tourtas, Dr. Tatiana Frangopoulou, Dimitrios Karampas, biologist Dr. Elpida Karadimou, agronomist Georgios Katsikogiannis, and the professional divers and trainers Michalis Vasilakis, Stelios Asvestadelis, and Jean Asvestadelis. Taking part from the Institute of Mediterranean Studies were geophysicists: Dr. Nikos Papadopoulos, Dr. Dimitris Oikonomou, Dr. Kleanthis Symirdanis, and archaeologist Dr. Gianluca Cantoro. Warm thanks for their assistance are due to the following: the Municipality of Aghios Nikolaos which is expected to cover the greater part of research expenses through a Programme Contract, Mirum Hellas for providing a car and fuel, Creta Maris Beach Resort for its assistance via ALS AMKE with consumables and the residents of Elounda for the hospitable way in which they always welcome the research team and support its work in every way. As a token “present” the team took the 4th grade of Elounda Primary School on a guided tour of the works while research was underway.