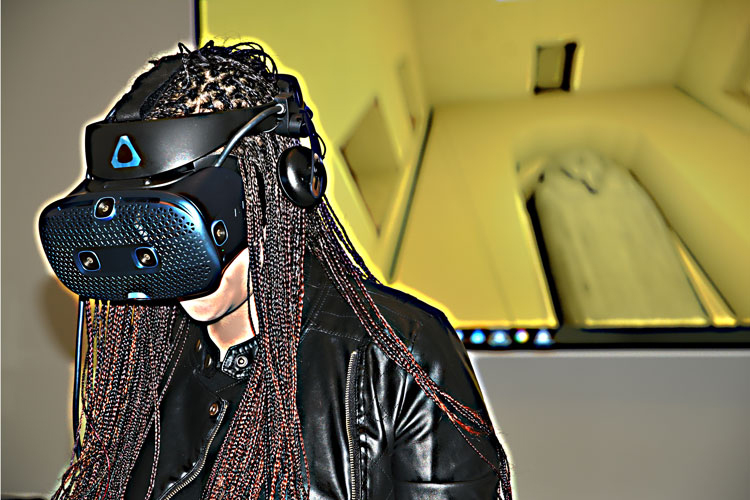 A tomb with a view: Egyptologist recreates an after-death experience

If playing the video game Assassin’s Creed Origins is as close as you’re likely to get to a pharaoh’s tomb — especially in this time of pandemic-thwarted travel — look no further than UC Berkeley for an expedition into an Egyptian burial chamber that won’t expose you to a mummy’s curse.

UC Berkeley Egyptologist Rita Lucarelli, a pioneer in the digitization of ancient funerary artifacts, is heading up an effort, enriched by high-end Vive Cosmos virtual reality headsets, to offer scholars and others an immersive tour of one of the world’s most spellbinding death cultures.

Dubbed “Return to the Tomb,” the interactive display is an offshoot of Lucarelli’s “Book of the Dead in 3D” coffin modeling project, and is set to preview later this year at the campus’s Phoebe Apperson Hearst Museum of Anthropology, which is currently closed due to the COVID-19 pandemic.

“You can have the experience of entering a tomb, walking around a coffin and interacting with these beautiful funerary texts and images,” said Lucarelli, an associate professor of Near Eastern studies and faculty curator of Egyptology at the Hearst Museum.

The first stop is the ancient burial ground of Saqqara, the site of the step pyramid of Djoser, and a 2,500-year-old tomb of a head physician and military leader named Psamtik, who is thought to have died in battle before reaching his burial chamber.

William Randolph Hearst purchased Psamtik’s 3-ton basalt sarcophagus lid while on an expedition to Egypt and donated it to the Hearst Museum in 1903, which at the time was in San Francisco. It is currently displayed in the entrance of the Berkeley campus’s Hearst Museum.

Ancient Egyptians used hieroglyphic magic charms and demonic guardians to guarantee royalty and other members of the elite a safe passage to the afterlife. Thus, the lid of Psamtik’s coffin, nicknamed “the Doctor,” is covered in spells that ask more than a dozen gods to protect him from his enemies in the hereafter.

While a virtual tour of Psamtik’s burial chamber may not rival the fast-paced action of Assassin’s Creed Origins, or even the classic movie “Raiders of the Lost Ark,” the experience promises to provide an authentic and painstakingly annotated perspective on Egyptian tomb life.

“It has a lot of entertainment value because we are using video game technology for the VR reconstruction of the tomb originally housing one of the coffins, and I love that,” said Lucarelli. “But my main aim is for this project to be strong academically and useful for scholars.”

Lucarelli’s project is part of a global movement to digitize ancient artifacts, many that one day will be repatriated to their countries of origin, and whose paintings and engravings are gradually fading with age.

Since 2015, The Book of the Dead in 3D team has been digitizing millennia-old sarcophagi and other burial artifacts using photogrammetry, laser scanning and 3D modeling software.

Many of these relics have been hidden for decades in storage facilities at the Hearst Museum, San Francisco’s Legion of Honor museum, San Jose’s Rosicrucian Egyptian Museum and San Francisco State University’s Sutro’s Egyptian Collection at the Global Museum, among other institutions.

The mummy case of Nes-Khonsu-pa-Khered in the Hearst Museum basement. (UC Berkeley photo by Yasmin Anwar)

“In Egyptology, printed books are still more valued than digital projects, but I think this trend is slowly changing as we use new tools to document these ancient treasures,” said Lucarelli, who regularly makes presentations at international conferences on how to use new technology to preserve ancient artifacts and monuments.

“Everything you see is rigorously vetted to be historically accurate and give a well-rounded educational viewpoint,” said Johnson, who works closely with Lucarelli and the team’s computer scientists, coders and designers to ensure that the 3D modeling doesn’t veer from authentic to cartoonish, among other things.

Other partners on the project include, at UC Berkeley, the Berkeley Center for New Media and the Archaeological Research Facility, as well as the University of California’s CITRIS and the Banatao Institute.

“We’re doing something quite groundbreaking, in terms of building an immersive virtual reality experience that is authentic, in using scholarly content and making it available to many more people while preserving artifacts,” said Hoffman, who coordinates the technical aspects of the project and its players.

A native of Puglia, Italy, Lucarelli studied at the Università degli Studi di Napoli L’Orientale, where she learned Greek and Arabic and earned a degree in Egyptology. As a field assistant at an excavation in Luxor in 1999, she recalls the goosebumps she got seeing her first mummy being pulled out of a funerary shaft.

“It was an unforgettable moment, really emotional,” she said.

Lucarelli pursued her Ph.D. and postgraduate studies in the Netherlands and Germany with a focus on the funerary texts of the ancient Egyptian “Book of the Dead,” a 19th century compilation of 2,200-year-old spells inscribed on papyri, amulets, sarcophagi, tomb walls and other surfaces.

She found it enchanting: “The ancient Egyptians called coffins the ‘chests of life’ because they protected the deceased on their journey to the netherworld, where they were reborn in the sky as a star,” Lucarelli said.

As part of a team of Egyptologists at Bonn University, she helped create the first digital archive of magic spells that guided ancient Egyptians on their journey through the Duat, the ancient Egyptian netherworld, and the Hall of Two Truths, where the deceased faced final judgment before being granted eternal life.

In 2014, Lucarelli joined UC Berkeley as one of two faculty members in Egyptology. As she took stock of the Hearst Museum’s stored Egyptian artifacts, she could not find complete papyrus scrolls with spells of the Egyptian Book of the Dead, as had been available to her in the Netherlands and Germany.

Thanks to some seed grants from the Digital Humanities program at UC Berkeley and the Mellon Foundation, Lucarelli was able to annotate the sarcophagus lid using text translation and transcription.

Since then, Lucarelli’s passion for the magic spells and figures of gods that adorn the exteriors and interiors of sarcophagi has only intensified, as has her mission to expand access to ancient Egyptian artifacts through new media and outreach. Her Book of the Dead in 3D website was recently translated into Arabic.

As for the millennia-old sarcophagi she has been fortunate to get close to, she prefers them without mummies — and the mythical curse that comes from disturbing them.

“My coffins are, luckily, empty,” she said.