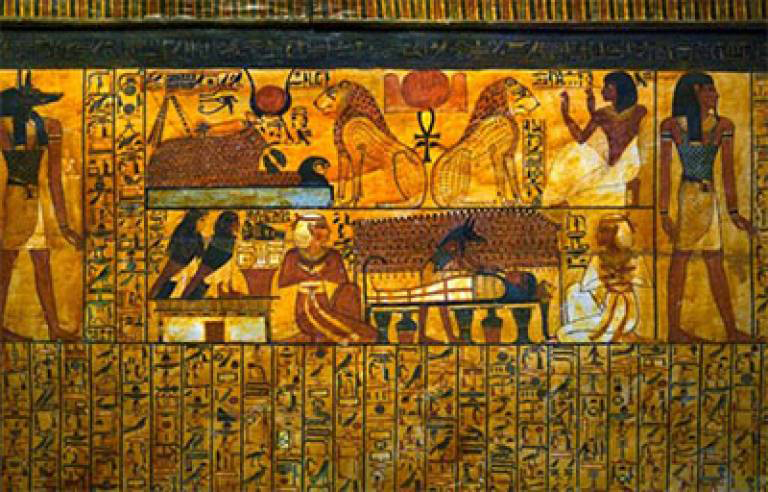 A conference on ‘Rethinking the visual aesthetics of ancient Egyptian writing’ will be co-hosted by the UCL Institute of Archaeology, in November 2021, for which a call for papers has been announced with a deadline of 31 May 2021.

This virtual conference is co-organised by Stephen Quirke (UCL), Rita Lucarelli (University of California, Berkeley) and Hany Rashwan (University of Birmingham); and hosted by the UCL Institute of Archaeology and the Department of Near Eastern Studies (UC Berkeley). The conference will be live-streamed on 26 & 27 November 2021.

In 1927, Gardiner (Egyptian Grammar, 18 §12) wrote that “Throughout the entire course of history no people has been more afflicted with the scribendi cacoethes than the Egyptians. The decorative character of the hieroglyphic script and its close connexion with pictorial art made it a natural and handy medium of ornamentation.” Two centuries after the decipherment of the ancient Egyptian scripts in 1822, still the principles that govern its visual/verbal interactions are not yet fully acknowledged and can be easily overlooked under the “tyranny of the alphabet” (Harris, The Origin of Writing, 1976). The current alphabetical systems replace pictures with alphabetic signs.

Thus, the visual creativity of ancient Egyptian writing has been reduced to the linear organisation of our modern ‘transliteration’. Yet, the implications of this trans-scription have to be theorised or investigated in the way that Translation Studies have generated productive waves in the study of movements between languages. Instead, it seems that Egyptologists became more mechanical in applying old terms for the visual components of ancient Egyptian writing uncritically, or they impose new terms from Eurocentric contexts without fully considering the visual complexity of ancient Egyptian writing. The close relationship between the vocal forms and the sense-signs confirms that the phonological and semantic principles in creating the ancient Egyptian words were intertwined and cannot be separated theoretically. The visual qualities of the ancient Egyptian scripts are still understudied in Egyptology, particularly for literary compositions, from hymns and liturgies to narrative tales, leaving an urgent need for more detailed analytical research.

For example, an ancient Egyptian word may be written with one or more soundless signs, the so-called ‘determinatives’. This phenomenon may open up another perspective around the fixed meanings we uncritically extract from our modern ancient Egyptian dictionaries without exploring the metaphorical relation of the ‘determinatives’ used and the particular textual context. In other words, the ancient Egyptian words are not restricted to dictionary meanings, as any lexicographer is aware. On the contrary, the ancient scripts offered their writers unlimited potential for more semantic connotations based on the chosen ‘determinative’ that has been carefully used to serve its unique textual context. The problems of literal or narrow readings arise not among dictionary-compilers but among dictionary-users. The semantic reasons behind such visual varieties of each word are still an understudied area of research.

Suggested areas for papers to address include but are certainly not limited to:

-Rediscovering the ancient Egyptian terms for features of language and their distinctive concepts.

-Redefining the position, nature and literary functions of soundless signs in hieroglyphic, hieratic and demotic writings (signs used for the function, which Champollion called a “determinatif”).

-The visual-linguistic complexity of the ancient Egyptian writing in comparison with other pictorial scripts.

-The reception of the ancient Egyptian writing from ancient Nubia to early Egyptologists.

-The harmony between the written content and its spatial context or the architectural design.

-Verbal-pictorial metaphors of protective/punishing texts that enter into dialogue with the eyes of ancient Egyptian readers.

-Indigenous evidence about the magical power of the ancient Egyptian hieroglyphic script.

-The creative use of “determinatives” in divine and demonic names.

-The innovative use of hieroglyphic signs to denote sounds or meanings different to their regular use.

Abstracts (max. 400 words in English) should be sent in a word document, along with a short biography that contains academic affiliations and publications. The deadline for all submissions of abstracts is 31 May 2021. Joint contributions are welcomed. Please send the abstract to the conference email: [email protected]

Notification of abstract acceptance will be issued by 29 June 2021. Talks will be allotted 20 minutes for the presentation, with 10 minutes for questions and answers on Zoom.

The proceeding will be co-edited by the organisers and published with Oxford University Press.