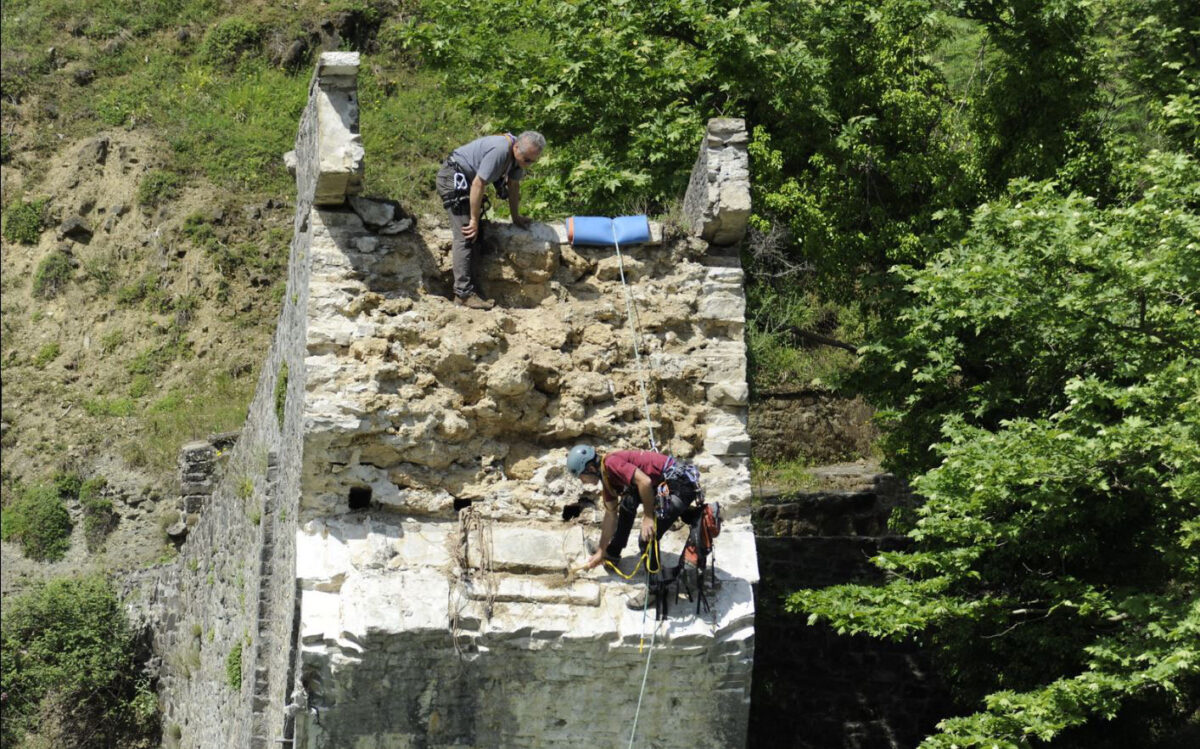 Europa Nostra Award for the conservation of the Plaka Bridge

The European Commission and Europa Nostra have just announced the 2021 winners of the European Heritage Awards / Europa Nostra Awards, the EU prize for cultural heritage funded by the Creative Europe programme. This year, Europe’s top honour in the heritage field goes to 24 exemplary achievements from 18 European countries.

Greece has won a European Heritage Award for the conservation of the Plaka Bridge in Epirus.

Plaka Bridge is a single arched stone-bridge, the largest and most impressive of its kind in Epirus. On 1 February 2015, during a heavy storm that caused the river to overflow, a significant part of the main arch and the east pier of the bridge collapsed. The project has restored the bridge to its former beauty and underlined its considerable value to both the tangible and intangible values of the natural landscape in which it is found. The project was completed thanks to the successful collaboration of the Ministry of Culture and Sports, the Ministry of Infrastructure, the Ministry of Finance, the Prefecture of Epirus, the National Technical University of Athens and the Technical Chamber of Greece. The project was funded by the Hellenic Ministry of Finance and Development. The Region of Epirus and a private sponsor also contributed financially to the project.

The Plaka Bridge was built in 1866 on the river Arachthos with an arch spanning over 40 metres with a height of 20 metres. It is listed as a protected historical monument and has an important historical significance to Greece. The bridge was constructed to establish communication and trade with surrounding communities and, until 1913, it was on the border line between Greece and the Ottoman Empire, serving as one of the two mainland entrances to Greece. Though limited repair works were carried out on the bridge over time, none addressed the serious underwater erosion of its foundations.

With strong public support, the work to recover the Plaka Bridge began almost immediately following the collapse of the bridge in February 2015. Extensive interdisciplinary research and documentation was carried out to understand the cause of the collapse and to design a comprehensive restoration programme that would stabilise the remaining elements of the bridge, address structural issues posed by river flow and allow reconstruction of the bridge using the original, fallen fragments wherever possible with the careful selection of appropriate, additional materials when necessary. “Research and documentation formed a solid foundation for this project which aimed to define and repeat the traditional techniques that were used in its construction”, the Jury noted.

The project is remarkable in that it is the very first reconstruction of a stone-bridge in Greece, and is one of few similar projects worldwide. The wide range of expertise and knowledge which has been recovered about this unique project has been enriching for the scientific community, with results disseminated through publications and conferences at an international level. Natural, traditional materials were used in its restoration while traditional construction methods were recovered and demonstrated during the project. The restored monument has been reintegrated into its outstanding natural landscape as well as in the social and cultural life of the community.

“This project is an example of how a structure that follows the principle of utility and construction becomes beautiful. The completed restoration of the Plaka Bridge contributes to the enhancement and conservation of the landscape and of the environment”, the Jury stated.

The Award winners were selected by independent juries composed of heritage experts from across Europe, upon evaluation of candidatures submitted by organisations and individuals from 30 European countries.

The announcement of the Award winners 2021 has just been made at a live online event co-hosted by Mariya Gabriel, European Commissioner for Innovation, Research, Culture, Education and Youth, and Hermann Parzinger, Executive President of Europa Nostra.

The online event was opened with a forceful and engaging video message by the President of the European Parliament. David Sassolipaid tribute to the Award winners:“Through your professionalism, your dedication, your artistic sensitivity, you have helped revitalise the Europe of today and to project it into the future”.Referring to the Conference on the Future of Europe and the New European Bauhaus, two major initiatives recently launched by the European Institutions, the President of the European Parliament emphasised: “Culture and artistic heritage are not secondary elements, but they represent fundamental tools to foster cohesion, to strengthen our humanity, to give meaning to our belonging. (…) Culture and heritage are essential elements from which tostart again and from which to relaunch our European policies.”

Speaking at the online event, European Commissioner Mariya Gabriel said: “The winners of the European Heritage Awards / Europa Nostra Awards 2021 are ambassadors of the beauty of heritage in Europe, whether it be traditions and know-how, breath-taking architecture or the way that heritage can unite communities and generations. I truly believe that the successful preservation of our tangible and intangible heritage depends on the commitment of the people behind it. With these awards, we therefore honour all those exceptional men and women, heritage professionals, architects, scientists and volunteers who bring our common heritage closer to our hearts. Their vision should be applauded.”

Europa Nostra’s Executive President Hermann Parzinger stated: “Each year, the winners of the European Heritage Awards / Europa Nostra Awards exemplify the incomparable creativity and commitment of those who work to protect, valorise and pass on Europe’s precious inheritance to the next generation. This year’s laureates powerfully demonstrate how heritage offers solutions and paths to recovery in the face of seemingly insurmountable challenges, as we take action for the climate, mobilise for sustainable urban and rural development and tackle the many threats to our core European values. We applaud their outstanding achievements: may they serve as inspiration and encouragement for future action for so many heritage professionals and enthusiasts across Europe and beyond.”

The Portuguese Minister of Culture and Acting Chair of the EU Council of Ministers Graça Fonseca responsible for Culture also shared her video message of congratulations: “Cultural heritage does not recognise borders. Languages, science and art sail beyond the limits that geography and history establish. (…) My congratulations to all who participated and to the winners, because it is your work, dedication and talent that best represent these ideals. My thanks to the European Commission and EuropaNostra for this annual initiative, one that is so important for our shared European project.”