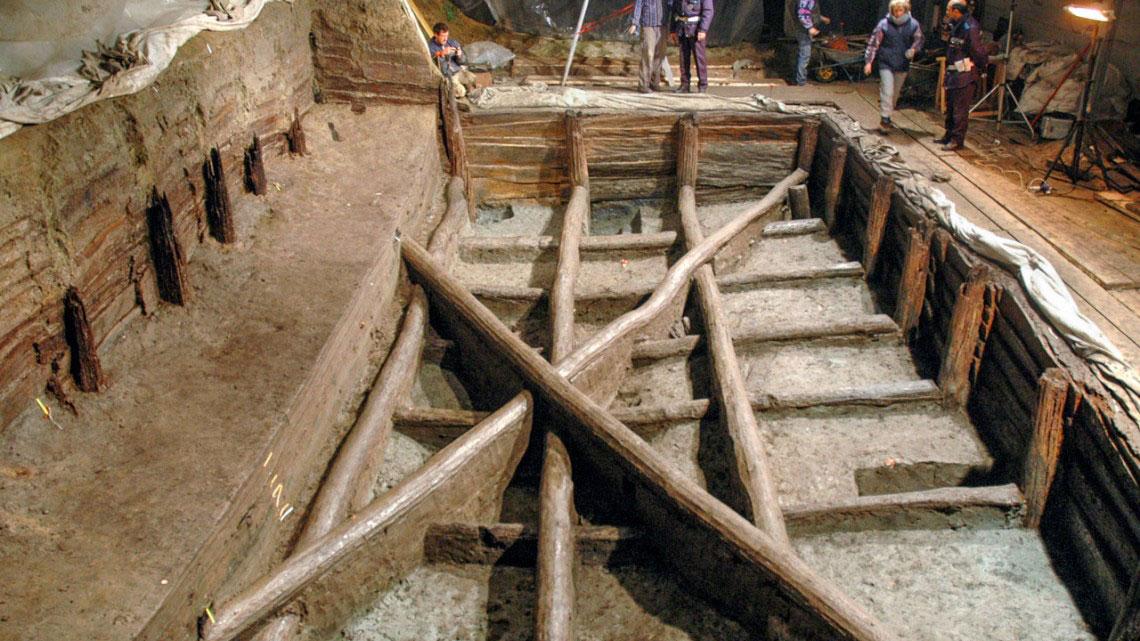 The Noceto Vasca Votiva is a unique wood structure that was unearthed on a small hill in northern Italy in 2005. Built primarily of oak and slightly larger than a backyard swimming pool, the exact purpose of the in-ground structure has remained a mystery, as has the date of its construction. Italian researchers estimated its origins go back to the late Middle Bronze Age, sometime between 1600 and 1300 BC.

While that gap might not seem huge, in archeological terms it’s like comparing the culture that invented the steam engine with the one that produced the iPad.

A Cornell team led by Sturt Manning, Distinguished Professor of Arts and Sciences in Classics and director of the Tree-Ring Laboratory, used dendrochronology and a form of radiocarbon dating called “wiggle-matching” to pinpoint, with 95% probability, the years in which the structure’s two main components were created: a lower tank in 1444 BC, and an upper tank in 1432 BC. Each date has a margin of error of four years.

The finding confirms that the Noceto Vasca Votiva was built at a pivotal moment of societal change, and bolsters the Italian researchers’ theory that the structure was used for a supernatural water ritual.

The team’s paper, “Dating the Noceto Vasca Votiva, a Unique Wooden Structure of the 15th Century BCE, and the Timing of a Major Societal Change in the Bronze Age of Northern Italy,” published June 9 in PLoS ONE.

Manning has led the Tree-Ring Laboratory since 2006, and his team has advanced a range of tools and techniques that have successfully challenged common assumptions about historical artifacts and timelines. Among the lab’s specialties is tree-ring sequenced radiocarbon “wiggle-matching,” in which ancient wooden objects are dated by matching the patterns of radiocarbon isotopes from their annual growth increments (i.e., tree rings) with patterns from datasets found elsewhere around the world. This enables ultra-precise dating even when a continuous tree-ring sequence for a particular species and geographic area is not yet available.

“Working at an archaeological site, you’re often trying to do dendrochronology with relatively few samples, sometimes in less than ideal condition, because they’ve been falling apart for the last 3,500 years before you get to see them. It’s not like a healthy tree that is growing out in the wild right now,” Manning said. “We often measure the samples a number of times to extract as much signal as we can.”

The Noceto Vasca Votiva is about 12 meters long, 7 meters across and roughly four meters deep – although the depth was a little ambiguous at first. When the site was fully excavated, the researchers found that the structure had a second tank beneath it, which had been built first but collapsed before it was finished. It was initially unclear how much time elapsed between the creation of the two tanks, which shared some of the same materials.

Judging by the size of the structure and the extensive labor that would have been required to excavate the earth and drag timber to the uphill location, the Italian researchers recognized that the Noceto Vasca Votiva was a major undertaking for its era and theorized its purpose. But they were unable to determine the precise date of its origins, and so turned to the Cornell Tree-Ring Laboratory.

Manning’s team made multiple attempts with different samples. While the wood from the Noceto site was well-preserved – a rarity, given its age – there was an unexpected challenge when the samples did not seem to fit the international radiocarbon calibration curve that is used for matching tree-ring sequences. This suggested the curve needed revising for certain time periods, and in 2020 a new version was published. The Noceto data finally fit.

By combining radiocarbon dating calibrated via dendrochronologies from southern Germany, Ireland and North America, along with computer-intensive statistics, the Cornell team was able to establish a tree-ring record that spanned several hundred years. They pegged the construction of the lower and upper tanks at 1444 and 1432 BC, respectively; and they determined the finished structure was in use for several decades before it was abandoned, for reasons that may never be known.

The new timeline is particularly significant because it synchs up with a period of enormous change in Italian prehistory.

“You’ve had one way of life in operation for hundreds of years, and then you seem to have a switch to fewer, larger settlements, more international trade, more specialization, such as textile manufacture, and a change in burial practices,” Manning said. “There is something of a pattern all around the world. Nearly every time there’s a major change in social organization, there tends often to be an episode of building what might be described as unnecessary monuments. So when you get the first states forming in Egypt, you get the pyramids. Stonehenge marks a major change in southern England. Noceto is not the scale of Stonehenge, but it has some similarities – an act of major place-making.”

Because the structure was located atop a hill and not in the center of a village, it wasn’t used as a reservoir or well. The smooth layers of sediment that filled in the structure, and the absence of channels, imply it wasn’t used for irrigation. In addition, the researchers discovered a large set of objects deliberately deposited inside the tank, including numerous ceramic vessels, figurines and a range of stone, wood and organic items. All of that evidence indicates the structure was used in some kind of supernatural water ritual.

“It’s tempting to think it was about creating a reflective surface that you can see into, and where you put some offerings, but you’re also looking at the sky above and the linking of land, sky and water (rain),” Manning said.

Given the fact that nearby settlements in this southern edge of the Po Plain were built with dikes and terraces, and the region was agriculturally productive with much water management, water was clearly important for all aspects of the builders’ lives. At least for a time.

“The collapse of the whole social and economic system in the area around 1200 B.C. seems to occur because it becomes much drier,” Manning said.

The research was supported by the Italian Ministry of Education, University and Research.