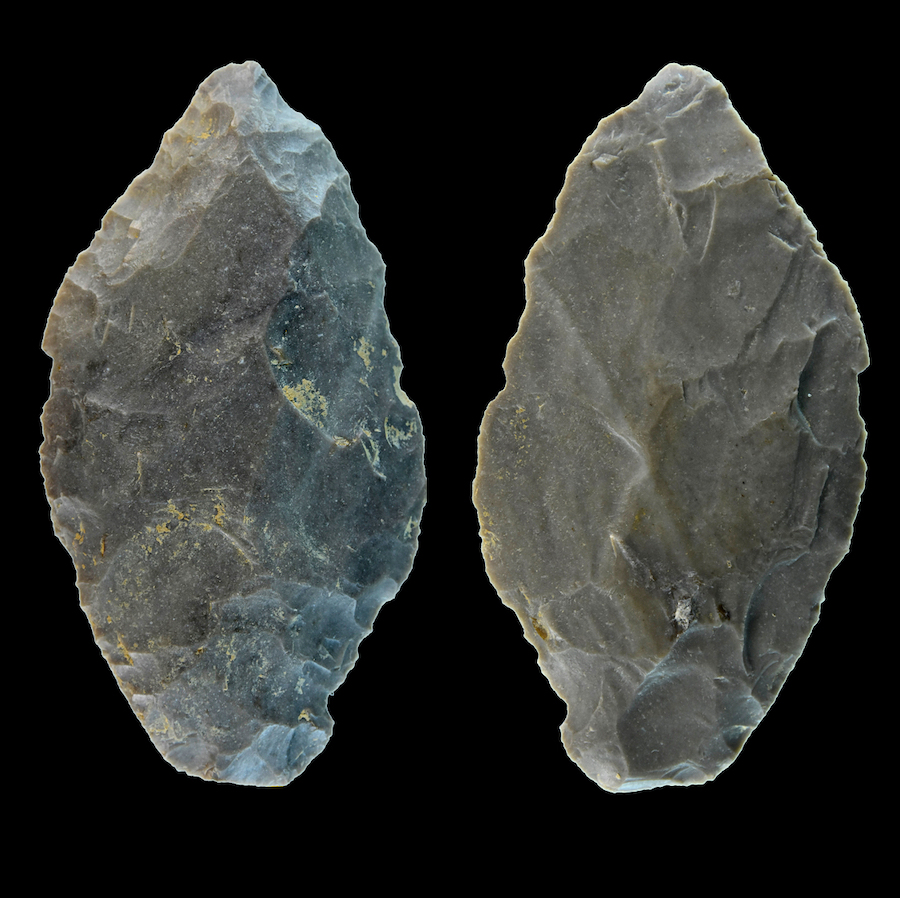 The leaf point from Hohle Fels

65,000 years ago Neanderthals from the Swabian Jura hunted horses and reindeer with hafted leaf-shaped stone points. A newly discovered leaf point from the UNESCO World Heritage site of Hohle Fels Cave documents the evolution of hunting. A team under the direction of Professor Nicholas Conard for the University of Tübingen and the Senckenberg Centre for Human Evolution and Palaeoenvironment in southern Germany recovered the artifact underlying a layer dating to 65,000 years ago, which represents a minimum age for the find. Microscopic studies document that this carefully made projectile point was mounted on a wooden shaft and used as a thrusting spear to kill large game. Results of the excavations and analysis of the leaf point appear in two papers in last week’s publication of Archäologische Ausgrabungen in Baden-Württemberg and Mitteilungen der Gesellschaft für Urgeschichte.

“The new discovery represents the first time a leaf point has been recovered from a modern excavation, allowing researchers to study the fresh find with state-of-the-art methods,” says Conard. The last time researchers in the region recovered such artifacts was in 1936. The chert artifact is 7.6 cm long, 4.1 cm wide, 0.9 cm thick and weighs 28 grams. Conard adds that “our results document how the tool was made, used and why it was discarded.” Thanks to a series of four ESR-dates the find is securely dated to over 65,000 years ago. Until now finds of leaf points were interpreted as belonging to the period between 45,000 and 55,000 years ago, and belonging to the last cultural phase of the Neanderthals in Central Europe. Conard reports “The new results demonstrate that our assumptions about the dating of the cultural groups of the late Neanderthals were wrong and need revision.”

Dr. Veerle Rots from the University of Liège in Belgium conducted detailed microscopic analyses of the leaf point. Damage to the tip indicates that the artifact was used as a hafted spear point, and that the spear was likely thrust into prey rather than being thrown. Rots’ work documents how Neanderthals used plant-based glue and bindings made from plant fibers, sinew or leather to secure the leaf point to the spear. Neanderthals clearly used the spear for hunting. While they re-sharpened the tool it broke, leading to its discard. Rots remarks “Neanderthals were expert stone knappers and knew exactly how to make and use complex technologies combining multiple parts and materials to produce and maintain deadly weapons.” Earlier fossil humans during the time of Homo heidelbergensis used sharpened wooden spears for hunting, but these spears lacked mounted stone points like those used by Neanderthals.

The leaf point from Hohle Fels will be on display at the “Find of the Year” at the Museum of Prehistory in Blaubeuren until January 2022. “Hohle Fels is a remarkable site where after 25 years of excavation by the current team, spectacular discoveries from the period of the Neanderthals and early modern humans are still being made,” says Dr. Stefanie Kölbl, the director of the Museum of Prehistory.

The Museum of Prehistory in Blaubeuren is the central research museum for topics related to the UNESCO World Heritage sites of the Swabian Caves and for Ice Age Art. It contains many of the earliest examples of figurative art including the Venus of Hohle Fels and the earliest musical instruments known worldwide.