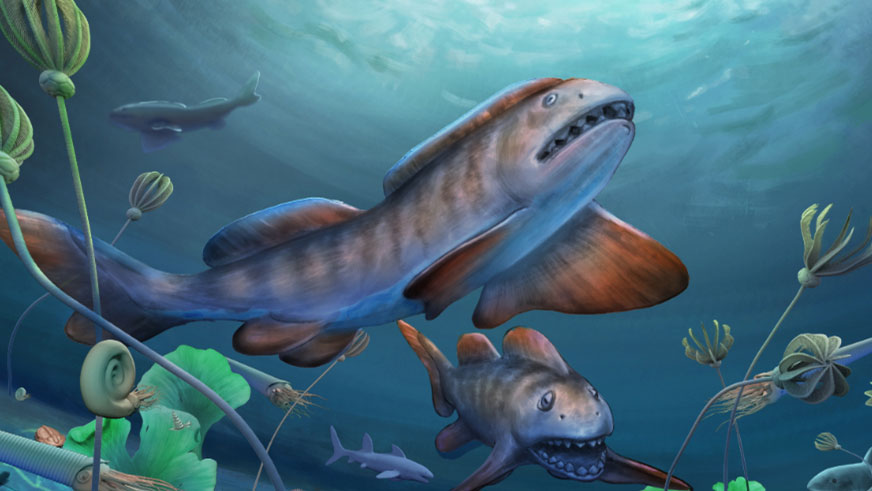 Found in China for the first time

The fossil of a 290-million-year-old shark with petal-shaped teeth was found in China for the first time, according to Gai Zhikun, an associate researcher at the Institute of Vertebrate Paleontology and Paleoanthropology (IVPP) of the Chinese Academy of Sciences. The Petalodus teeth were found in the Qianshi limestone in Yangquan City, north China’s Shanxi Province.

Petalodus is a long-known genus of Petalodontiformes, a small enigmatic group of chondrichthyans. There are two species of Petalodus named based on subtle shape differences. The seven teeth found in Yangquan City are assigned to the species P. ohioenesis because of their vertically narrow cingulum and much longer root.

In terms of size, the Petalodus tooth fossil is close to the tooth of the great white shark (Carcharodon carcharias). It can be estimated that it is a prehistoric giant shark with a body length of three to five meters.

The study showed that the specimens are characterized by petal-shaped teeth with a spade-like crown and a long, tongue-shaped root. The sharp cutting ridges with numerous vertical fine grooves and the large occlusal surface of the teeth in Petalodus are suggestive of adaptations for biting and slicing soft tissues. The horizontal imbricated ridges embracing the base crown of the teeth in Petalodus may prevent the prey from escaping by increasing friction once the teeth pierce into the soft tissues. Therefore, Petalodus species probably were shark-like fishes living an active predatory lifestyle and were probably one of the top predators in the Late Paleozoic seas.

Petalodus is a cosmopolitan genus. So far, the fossil of Petalodus has been found in multiple places in the Northern Hemisphere including Europe and North America.

Previous studies have shown that Yangquan, more than 200 million years ago, was a shallow, warm and light-permeable sea close to the equator, which is very suitable for all kinds of marine life. The fossil site of Yangquan was part of the North China Craton at paleoequatorial areas. The isolated position of the North China Block separated from the Laurusia and East Gondwana by the Paleo-Tethyan would undoubtedly act as a barrier for the dispersal of Petalodus.

“The successful dispersal of Petalodus from Laurusia to the North China Block along the Paleo-Tethys Ocean indicated that Petalodus might already have the ability to migrate across the ocean, and it may be a top predator with strong swimming ability, rather than a benthic shell cruncher,” said Dr. Gai.

The study was published in Acta Geologica Sinica.