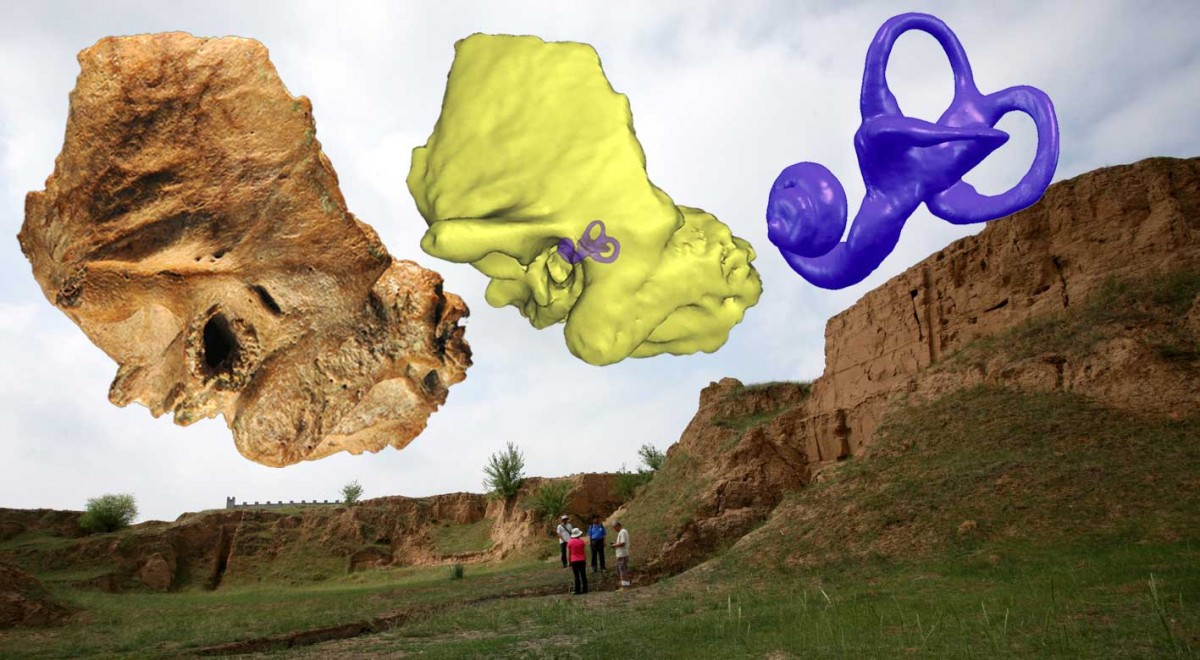 Modern humans emerged from complex “labyrinth of biology and peoples”

Modern humans emerged from complex “labyrinth of biology and peoples,” findings of a study conducted by researchers at Washington University in St. Louis suggest.

Re-examination of a circa 100,000-year-old archaic early human skull found 35 years ago in Northern China has revealed the surprising presence of an inner-ear formation long thought to occur only in Neandertals.

“It suggests, instead, that the later phases of human evolution were more of a labyrinth of biology and peoples than simple lines on maps would suggest.”

The study, forthcoming in the Proceedings of the National Academy of Sciences, is based on recent micro-CT scans revealing the interior configuration of a temporal bone in a fossilized human skull found during 1970s excavations at the Xujiayao site in China’s Nihewan Basin.

Trinkaus, the Mary Tileston Hemenway Professor in Arts & Sciences, is a leading authority on early human evolution and among the first to offer compelling evidence for interbreeding and gene transfer between Neandertals and modern human ancestors.

His co-authors on this study are Xiu-Jie Wu, Wu Liu and Song Xing of the Institute of Vertebrate Paleontology and Paleoanthropology, Beijing, and Isabelle Crevecoeur of PACEA, Université de Bordeaux.

“We were completely surprised,” Trinkaus said. “We fully expected the scan to reveal a temporal labyrinth that looked much like a modern human one, but what we saw was clearly typical of a Neandertal. This discovery places into question whether this arrangement of the semicircular canals is truly unique to the Neandertals.”

Often well-preserved in mammal skull fossils, the semicircular canals are remnants of a fluid-filled sensing system that helps humans maintain balance when they change their spatial orientations, such as when running, bending over or turning the head from side-to-side.

Since the mid-1990s, when early CT-scan research confirmed its existence, the presence of a particular arrangement of the semicircular canals in the temporal labyrinth has been considered enough to securely identify fossilized skull fragments as being from a Neandertal. This pattern is present in almost all of the known Neandertal labyrinths. It has been widely used as a marker to set them apart from both earlier and modern humans.

The skull at the center of this study, known as Xujiayao 15, was found along with an assortment of other human teeth and bone fragments, all of which seemed to have characteristics typical of an early non-Neandertal form of late archaic humans.

Trinkaus, who has studied Neandertal and early human fossils from around the globe, said this discovery only adds to the rich confusion of theories that attempt to explain human origins, migrations patterns and possible interbreedings.

While it’s tempting to use the finding of a Neandertal-shaped labyrinth in an otherwise distinctly “non-Neandertal” sample as evidence of population contact (gene flow) between central and western Eurasian Neandertals and eastern archaic humans in China, Trinkaus and colleagues argue that broader implications of the Xujiayao discovery remain unclear.

“The study of human evolution has always been messy, and these findings just make it all the messier,” Trinkaus said. “It shows that human populations in the real world don’t act in nice simple patterns.

“Eastern Asia and Western Europe are a long way apart, and these migration patterns took thousands of years to play out,” he said. “This study shows that you can’t rely on one anatomical feature or one piece of DNA as the basis for sweeping assumptions about the migrations of hominid species from one place to another.”