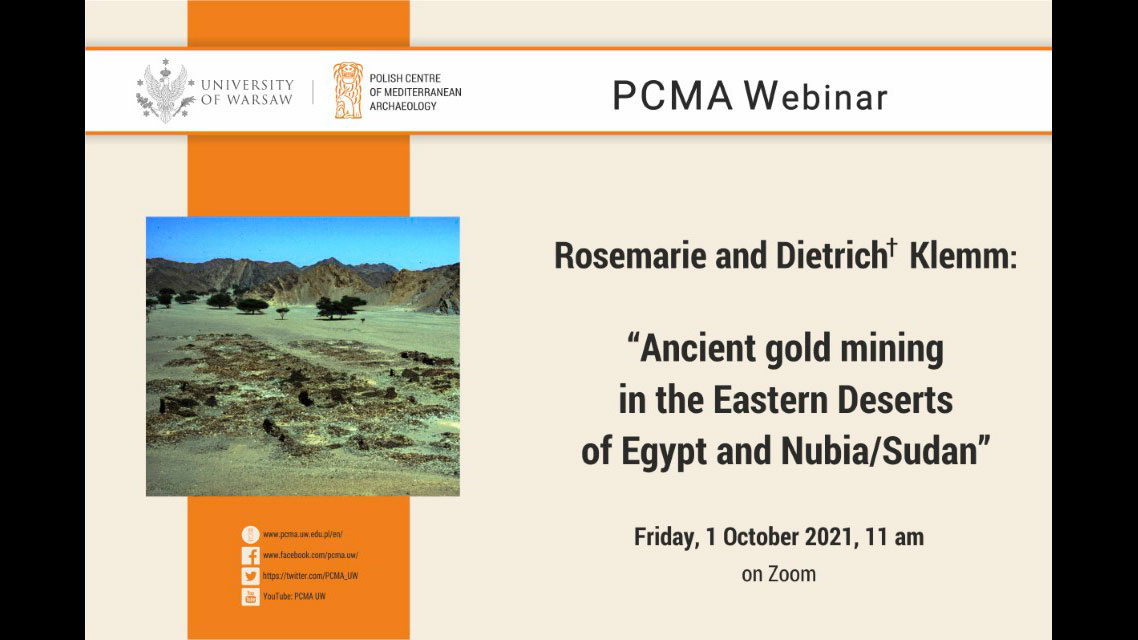 The PCMA Seminar series has been resumed now after the holiday break. At the first seminar this October Rosemarie
Klemm will present a lecture on the work she conducted with the late Dietrich Klemm on the “Ancient gold mining in the Eastern Deserts of Egypt and Nubia/Sudan”.

For many years, Rosemarie and Dietrich Klemm explored over 200 previously unknown gold deposits in extensive field expeditions, both geologically and archaeologically, and were able to use the artefacts they found to explain
the mining and processing methods and gain insights into the life of the old miners.

“The gold deposits exploited in Egypt and in the neighboring Nubia (Sudan) in ancient times are located in the crystalline basement east of the Nile and primarily bound to quartz veins. Nubia, which is particularly rich in gold deposits, was therefore an important conquest for the ancient Egyptians. Since the Old Kingdom (ca. 2600 BC), gold mining under Egyptian control can be proven in Nubia. In early New Kingdom (ca. 1500 BC) the gold yield reached a maximum, which can be seen not least from the abundance of Egyptian gold objects from this period.

The mining sites lie mostly in the mountains. The gold-bearing quartz had to be chopped off underground or in open cast trench pits and then sent for further processing. Another gold extraction method was far more productive:
gold-bearing quartz chunks due to erosion deposited in wadis (dry valleys in the mountains) were collected by hundreds of workers and then processed.
We call it wadiworkings”.

*Rosemarie Klemm* collaborates with the Institute of Egyptology and Coptology at Ludwig-Maximilians-University (LMU) in Munich. Her archaeological work over the past 40 years has focused on the exploitation
of natural resources in various parts of Egypt, starting from the Pharaonic times. Together with the late Dietrich Klemm, a geochemist and mineralogist and long-time associate of the LMU, they have assembled a unique collection
of rocks from the Nile Valley and the Eastern Desert. It is now held at the British Museum in London and is a significant petrographic reference databases used in the study of Egyptian art. Over the past decades, this pair of researchers has also completed significant field projects on gold mining in the Eastern Desert mountains.

The seminar will be held on Zoom on 1st October 2021 at 11 am. It will be chaired by dr Mariusz Gwiazda, from whom the Zoom link can be requested by email (m.gwiazda2@uw.edu.pl )