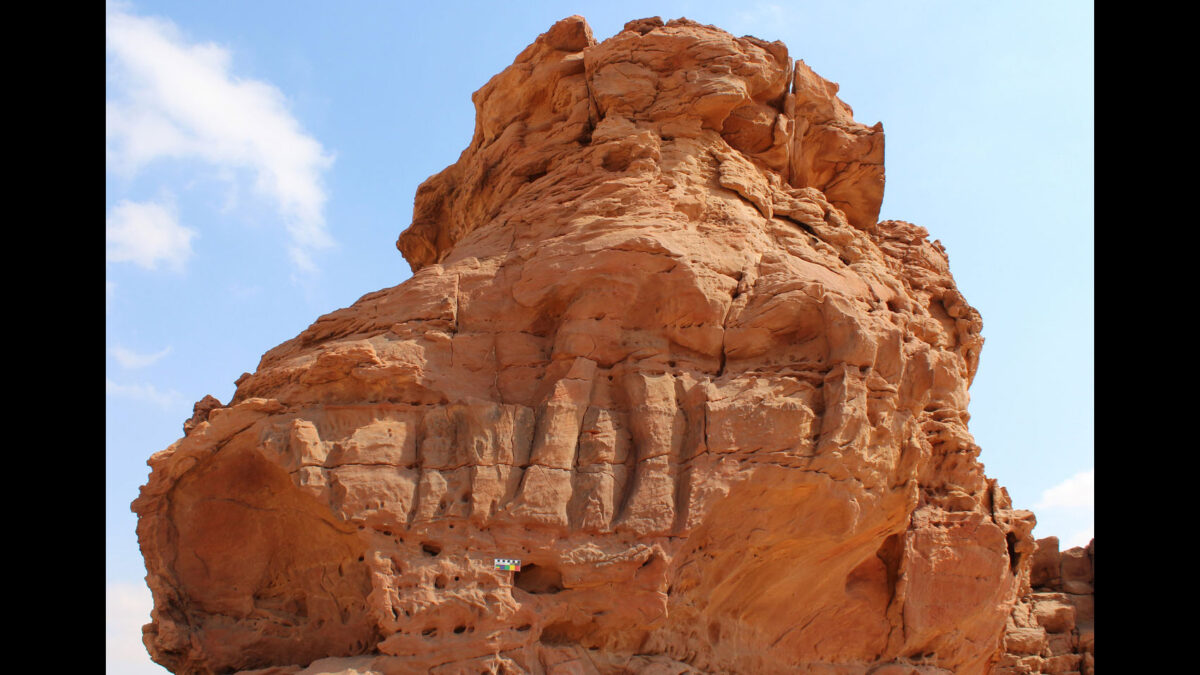 In total, 21 reliefs have been identified

A new study lead by an international team of scientists uses a wide range of methods to date the heavily eroded reliefs, and connecting them to a period in which a green Arabia was home to monument-building pastoralists.

The monumental reliefs at the Camel Site in northern Arabia are unique: three rock spurs are decorated with naturalistic, life-sized carvings of camels and equids. In total, 21 reliefs have been identified. Based on similarities with artworks found in Petra, Jordan, the rock site was initially dated from the Nabataean period, 2000 years ago. Following this preliminary proposal, a new research program lead by researchers from the Max Planck Institute for the Science of Human History, the CNRS, and King Saud University uses a variety of cutting-edge dating methods to establish a much older age for the site, pushing its initial creation back to the Neolithic.

Rock art is extremely difficult to date, particularly at the Camel Site, where erosion has damaged the three-dimensional reliefs extensively. To establish an age for the site the team used a range of scientific methods including analysis of tool marks, assessment of weathering and erosion patterns, portable X-ray fluorescence spectrometry (pXRF) to measure rock varnish density, and luminescence dating of fallen fragments. In addition, test excavations identified a homogenous lithic assemblage as well as faunal remains, which could be radiocarbon dated.

Taken together, the data indicates that the sculptures were made with stone tools during the 6th millennium BCE. At this time, the regional landscape was a savannah-like grassland scattered with lakes and trees where pastoralist groups herded cattle, sheep and goats. Wild camels and equids also roamed the area and were hunted for millennia.

“We can now link the Camel Site to a period in prehistory when the pastoral populations of northern Arabia created rock art and built large stone structures called mustatil,” the authors state. “The Camel Site is therefore part of a wider pattern of activity where groups frequently came together to establish and mark symbolic places.”

The team’s stone mason estimates that each relief would have taken 10-15 days of carving to complete, during which the stone tools used to chip out the 3D shape and to polish the surface would have had to be re-sharpened and replaced frequently. Considering that the raw chert used to make the tools was sourced from at least 15km away and that carving the reliefs would have first required the construction of a working platform or rigging, the researchers believe the site’s impressive sculptures were likely a communal effort, perhaps part of an annual gathering of a Neolithic group.

The reliefs are part of a wider rock art tradition in the region that depicted life-sized, naturalistic animals, although the skill required for the creation of high reliefs is unique to the Camel Site. The weight gain and references to the mating season in the camel reliefs suggests that they maybe be symbolically connected to the yearly cycle of wet and dry seasons to which these biological changes are linked. Reconstructions of the carving and weathering processes at the site suggest that the site was in use for an extended period, during which panels were re-engraved and re-shaped. By the late 6th millennium BC most if not all of the reliefs had been carved, making the Camel Site reliefs the oldest surviving large-scale reliefs known in the world.

“Neolithic communities repeatedly returned to the Camel Site, meaning its symbolism and function was maintained over many generations,” says lead author Dr. Maria Guagnin. “Preservation of this site is now key, as is future research in the region to identify if other such sites may have existed. Time is running out on the preservation of the Camel Site and on the potential identification of other relief sites as damage will increase and more reliefs will be lost to erosion with each passing year.”