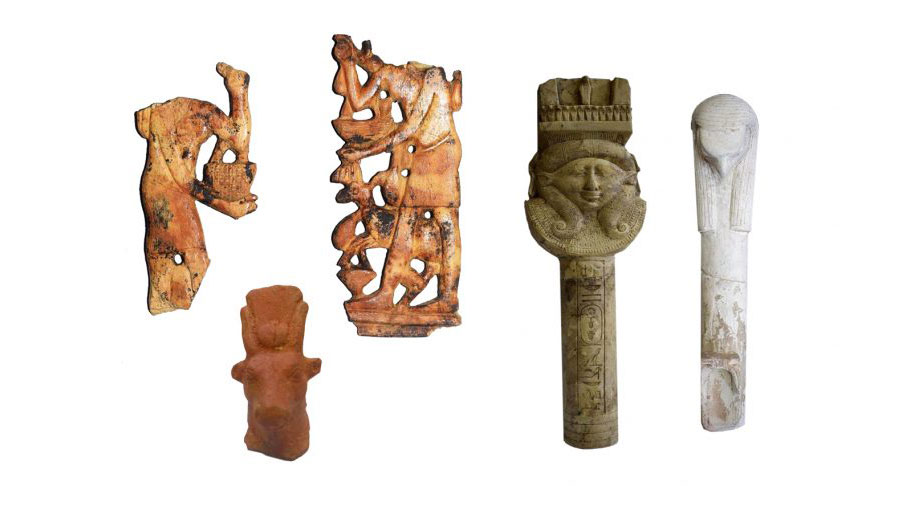 Used for the daily religious service of the goddess Hathor

Archaeologists conducting excavations at the ancient site of Tel al-Fara in the Kafr El-Sheikh Governorate have discovered tools used in religious rituals in dedication to Hathor.

Tel al-Fara was the home of the tutelary goddess of Lower Egypt, Wadjit, and has been occupied since the Predynastic Period until it was abandoned in the Old Kingdom, before being resettled in the 8th century BC. The site is comprised of three mounds, two of which are domestic settlements, with the third covering the temple site.

The researchers discovered a limestone pillar in the form of the goddess Hathor, a group of incense burners made of faience, one of them with the head of the god Horus, and a group of clay figurines that were used in religious and ceremonial rituals in dedication to Hathor.

Also unearthed was small statues of Taweret and Thoth, a large offering holder, a pure gold eye of Ujat, and the remains of golden scales used for gilding.

Dr. Mustafa Waziri, Secretary General of the Supreme Council of Archaeology said: “This is an important discovery, because it includes the tools that were actually used to perform the rituals of the daily religious service of the goddess Hathor, and it is likely that it was quickly placed under a group of stone blocks arranged regularly on top of a sand hill in the south of the temple of the goddess Wajit.”

General Manager of Kafr El-Sheikh and Head of Mission, Dr. Hossam Ghanim, said: “The mission also discovered a huge building of polished limestone from the inside, representing a well for holy water used in daily rituals.”