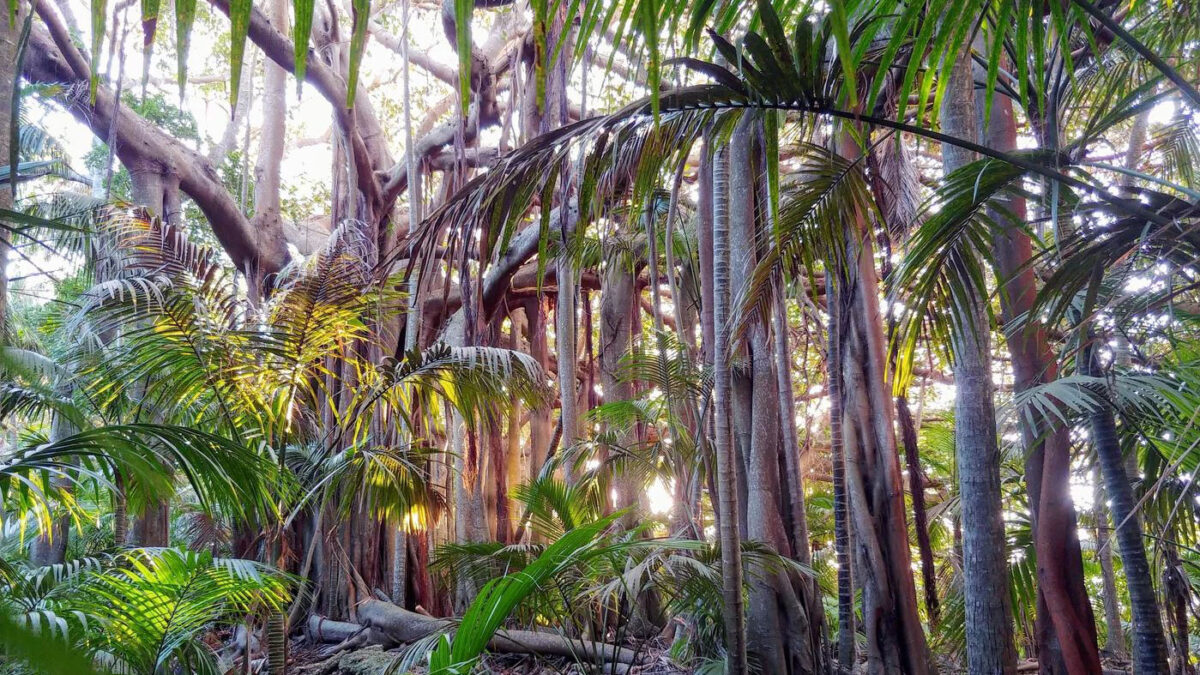 Deep roots of the ‘Anthropocene’ can be found in tropical forests

New special edition of the Proceedings of the National Academy of Sciences showcases multidisciplinary approaches to exploring human impacts on tropical forests and their associated earth systems.

Tropical forests regularly appear in the news as the front line of climate change and human sustainability challenges. They are some of the most threatened land-based habitats on the planet and are therefore key to discussions of the Anthropocene – the period in which human activities became major impactors of Earth systems.

In a new set of high-impact articles edited by researchers from the Max Planck Institute for the Science of Human History and the Smithsonian Research Institute, researchers from different fields and backgrounds show that if we are to better plan for the future, we must look deep into the past for the roots of the Anthropocene in the tropics.

Tropical forests and the Anthropocene – present and past

When considering the Anthropocene, we often think of the human activities with obvious ecosystem impacts: fossil fuel burning, nuclear fallout, or increasing plastic manufacture and pollution from the 20th century onwards.

However, we also now know that because tropical forests host over half of the planet’s biodiversity, generate large amounts of rainfall, anchor soils in place, and store massive amounts of carbon, human alteration of these environments can actually kick off a whole series of feedbacks – processes that reverberate across regions, continents, and even the Earth.

One of the editors of the new volume, Patrick Roberts, points out that human alteration of tropical forests “probably isn’t only a recent phenomenon.”

“Although tropical forests are often seen as pristine ‘wildernesses’ prior to industrial activities, we now know that hunter-gatherers, food producers, and even city-dwellers have inhabited – and modified – these environments for a long, long time,” continues Roberts. “Given that these habitats are embedded in a variety of earth systems, this opens up the potential to find very early roots for the Anthropocene.”

A variety of managed tropical landscapes

The new PNAS special feature, titled ‘Tropical Forests as Key Sites of the Anthropocene,’ shows the vast array of methods researchers are now using, from high power microscopes to sediment cores, from archaeological excavation to airborne laser scanning, to explore the different ways people have interacted with tropical ecosystems, climates and soils across space and time.

As Rebecca Hamilton, another of the feature editors, puts it, “the papers in this volume investigate a variety of human-forest interactions, including the exploitation of giant bird eggs in New Guinea, the impacts of paddy rice agriculture on ancient, threatened conifers in southeastern China, and a comparison of tropical urban life in the Classic Maya world and Greater Angkor.”

Dolores Piperno, the third editor of the volume, highlights how detailed reconstructions of human-environment interactions such as these are essential for modern conservation approaches.

“Human engagement with tropical forests took many forms, with local populations adapting to local scenarios. In the Medio Putumayo-Algodón reserve in Peru, for example, we highlight how Indigenous societies managed forest cover and biodiversity over 5,000 years, conserving it through periods of major political, economic, and social change.”

From a global ‘Anthropocene’ to more just practices in tropical conservation

Understanding the origins of the Anthropocene in the tropics is not only important for modern biodiversity and ecosystem protection, however. It also reveals the imbalanced historical processes that laid the groundwork for how people interact with the tropics, and earth systems more widely, today.

Articles focusing on the Canary Islands, Cabo Verde, and tropical New Guinea, for example, highlight the ways in which the arrival of European colonialism, followed by industrialization, disrupted the socio-ecologies of tropical systems through the conversion of land (e.g. to plantations) and marginalization of Indigenous activities.

“The term the ‘Anthropocene’ can suggest that our current sustainability plight was caused equally by all human societies and, in turn, impacts them all equally. However, contributors to this volume show that, particularly over the last 500 years, it has been an unequal and often-imbalanced process,” says Roberts.

“Indigenous populations of tropical regions have often been the most marginalized in recent human history,” Hamilton continues. “This collection shows that it is high time to recognize the long-term significance of traditional Indigenous land management in the tropics.”

Overall, the researchers hope that the papers of this special feature will encourage further engagement of policy makers and ecologists with Indigenous groups and scholars from the palaeo- and social sciences.

“In this way, we have the best chance of developing more fair, sustainable, and resilient futures for human-environment interactions in these critical, often misunderstood, environments,” concludes Roberts.