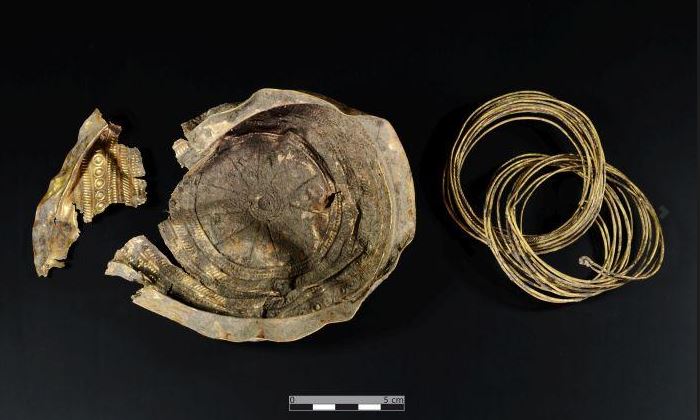 A Polish archaeologist has made ‘the discovery of his life’ after finding a unique 3,000-year-old gold bowl decorated with a sun motif.

Found in shallow ground close to the wall of one of the prehistoric houses in the settlement, the gold bowl measuring 5 cm high and 20 cm in diameter, and is made of very thin sheet metal, consisting of approximately 90 percent gold, 5 percent silver, and 5 percent copper.

Inside it they found two gold bracelets made of coiled wire and two clumps of organic material, enigmatic at the time of discovery.

Dig director Dr. Michał Sip and his team made the extraordinary discovery during excavation work at a prehistoric settlement used as a place of worship in Ebreichsdorf (Austria).

Considered one of the most important archaeological finds in the last few decades in Austria, Dr. Sip said: “This is the discovery of a lifetime for me. I have worked on several continents, also in Egypt or Guatemala, but I have never found anything similar.

“This is the first find of this kind found in Austria, and the second to the east of the Alpine line.”

He added that only a handful of vessels of this type have been discovered so far in Spain, France or Switzerland.

More are known from Northern Germany, Scandinavia and Denmark, because that was where they were produced’, describes the archaeologist.

According to his estimates, only thirty or so such bowls are known throughout Europe.

The bowl was found in shallow ground, close to the wall of one of the prehistoric houses in the settlement.

Researchers are now trying to determine the origin of the raw materials used to make the vessel.

Dr. Sip said: “During the existence of the settlement, it could have been a swamp, or a watercourse that partially filled seasonally. From its several hundred meters long section, we have already extracted almost five hundred bronze items . They include pins, daggers and knives.”

In addition, hundreds of kilograms of ceramic shells and animal bones were found in the watercourse.

Archaeologists think that it was a swamp, because the items were discovered in a layer with a thickness of 2.5 m.

According to Sip, bronze objects were thrown into water during religious rituals.

Between 1300-1000 BCE, the settlement in today’s Ebreichsdorf was inhabited by a community archaeologists refer to as the Urnfield culture (the name comes from the custom of cremating the dead and placing their ashes in urns which were then buried in fields). It was the Middle and Late Bronze Age. The community led a settled lifestyle, its economic base was agriculture and animal husbandry, especially sheep.

The culture is also known for its traces in contemporary Polish lands, and its specific, local variety is called the Lusatian culture. Its representatives built the famous settlement in Biskupin.

Sip said: “Not only are the numerous bronze and golden objects unique in this part of Europe — so is the fact that the settlement we discovered in Ebreichsdorf was so large.” The settlement relics extend over a few hundred meters on the north-south and east-west axes. In total, the settlement could occupy an area of about 10 hectares.

In the Austrian settlement, archaeologists also discovered many pole building — this name means that the house walls were made of poles. The space between them was probably filled with wattle and daub. One of them drew particular attention of researchers, because it was clearly definitely larger. It was built on a near-square plan, measuring 10 by 8 m.

The gold deposit was discovered in 2020. However, due to the significance of the discovery, researchers decided to disclose it after completing detailed analyses. The bowl will be exhibited at the Museum of Art History in Vienna. The Austrian railway concession excavations will continue for about 6 months.

Excavations in Ebreichsdorf (Lower Austria, approx. 30 km south of Vienna) have been conducted since September 2019. A railway station will be built in the location in coming years, which is why archaeologists have been commissioned by the Austrian Federal Railway (ÖBB) to check what hides underground before construction work starts.