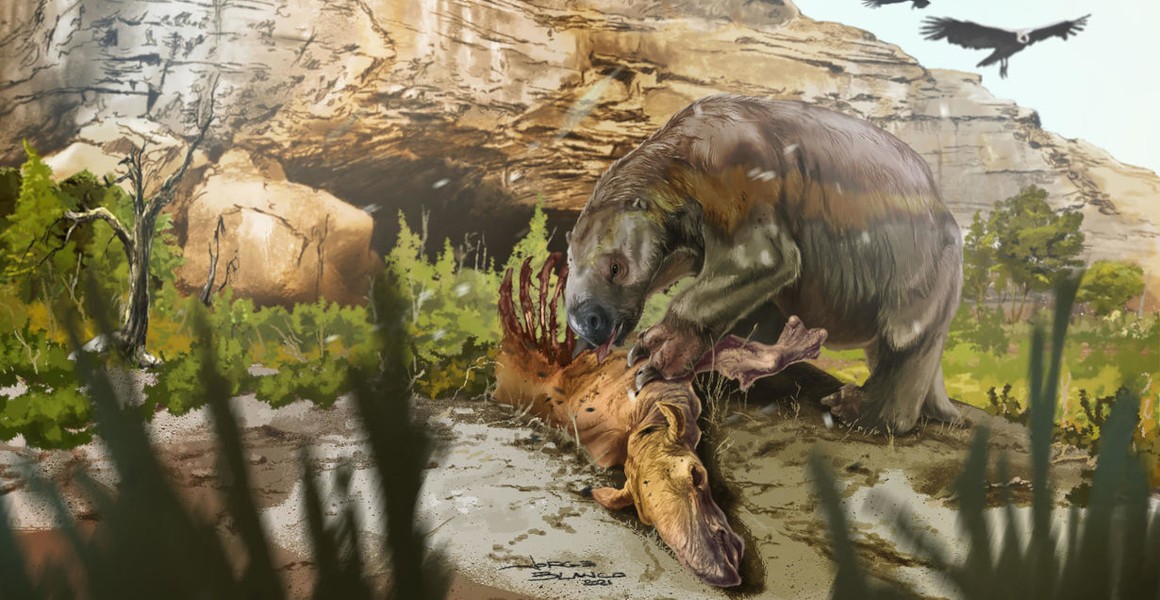 Giant sloth that once roamed South America scavenged for meat

A giant ground sloth that once roamed South America occasionally broke its plant-based diet to eat meat, researchers have found.

Darwin’s ground sloth had puzzled scientists for many years, with its teeth and a gut not well-suited to its herbivorous diet. However, comparisons with living relatives found that it may have occasionally eaten the leftovers of Pleistocene predators.

An extinct species of giant sloth discovered by Charles Darwin may not have been the strict plant-eater it was once thought to be.

Living during the Pleistocene between 1.8 million and 12,000 years ago, Mylodon darwinii was believed to have been a herbivore like most of its living relatives. However, analysis of hair samples found that to support its enormous size it was occasionally eating meat to supplement its plant-rich diet.

The findings have the potential to change our understanding of the ancient South American environment and the animals that lived in it.

Dr Julia Tejada, the lead author of this new study, says, ‘Sloths represented a major component of these ecosystems across the past 34 million years. These results, providing the first direct evidence of omnivory in an ancient sloth species, demand re-evaluation of the entire ecological structure of ancient mammalian communities in South America.’

Maria Zicos, a PhD student at the Museum who studies giant sloths, says the study is ‘thoughtful and compelling.’

‘They did quite a lot of work to substantiate their claims so that their claims on the extinct sloths were well supported and I was impressed by that,’ she said.

‘I will definitely look out for similar findings in my analysis after this paper.’

The research, led by scientists from the American Museum of Natural History, was published in Scientific Reports.

Ground sloths were a group of mammals that lived in the Americas for millions of years. At one point found from Alaska to Argentina, all species of ground sloth on the mainland had died out by 10,000 years ago as a mix of climate change and human hunting took their toll.

These hunts would have been made easier by the fact they were enormous, generally slow-moving animals that weighed up to the size of an elephant. Darwin’s ground sloth was slightly smaller than some of its larger relatives, coming in at around two tonnes in weight and roughly three metres long.

‘Mylodon was found in the cone of South America during the Quaternary,’ says Maria. ‘It lived in a variety of environments including Patagonia, the Argentine pampas and areas in the south of Bolivia, Uruguay and Brazil.

‘They must have been able to cope with a variety of environments, but we’re not quite sure how they dealt with cold areas. We know they had quite long fur, but in terms of metabolism it’s not really been discussed before.’

Previous analysis of the teeth and preserved faeces of ground sloths suggested that they were strictly herbivorous. However, just as some modern sloths occasionally snack on insects, researchers believed that ground sloths may have scavenged meat left behind by predators, such as big cats and wolves.

To assess this, the scientists gathered hair samples from the preserved remains of two species of ground sloths, Nothrotheriops and M. darwinii, as well as samples from living sloths and omnivorous animals like the coati, a racoon-like mammal from South America. From these samples, the scientist were then able to look at the different isotopes of nitrogen found in amino acids, which are the building blocks of proteins.

These values were then compared to living animals to find out what diets are associated with which isotope values, which were then applied to the sloths. This allowed the researchers to get a better understanding of what the extinct sloths were eating.

Dr John Flynn, a co-author on the paper, says, ‘Prior methods relied solely on bulk analyses of nitrogen and complex formulas that have many untested or weakly supported assumptions.

‘Our analytical approach and results show that many previous conclusions about trophic levels are poorly supported at best, or clearly wrong and misleading at worst.’

The results of this analysis found that while Nothrotheriops was probably a herbivore, M. darwinii was a closer fit to omnivorous species such as the coati.

While previous analysis of preserved dung has ruled out Darwin’s ground sloth being a hyena-like scavenger due to a lack of bone found within the feces, it may have eaten eggs or scavenged meat from kills left behind by predators.

The findings go part of the way to explaining some of the mysteries that have puzzled scientists over Darwin’s ground sloth. For example, its teeth have a smaller surface area for chewing than would be expected for a herbivore of its size, and it was thought that this would have made them poor at processing food.

In addition, it has been suggested that as its gut would have made up only a quarter of the animal’s mass, the sloth would have lost far more water from its food than it would have gained.

However, these discrepancies may be explained if the sloth was eating food with more energy, such as meat and eggs. These foods are more easily digestible than plants and so would have made up any shortfall in energy and water.

‘Whether they were sporadic scavengers or opportunistic consumers of animal protein can’t be determined from our research,’ Julia says. ‘But we now have strong evidence contradicting the long-standing presumption that all sloths were obligate herbivores.’

Their findings also go some way to explain an observed lack of mammal carnivores in South American fossils, with ground sloths potentially filling some of the roles. It may also give further clues about what the environment was like at the time, as fewer herbivorous ground sloths would have allowed a greater range of plants to grow.

The researchers hope to find out more about the feeding habits of other sloths to fill in this knowledge gap and create a better understanding of South American life over 10,000 years ago.