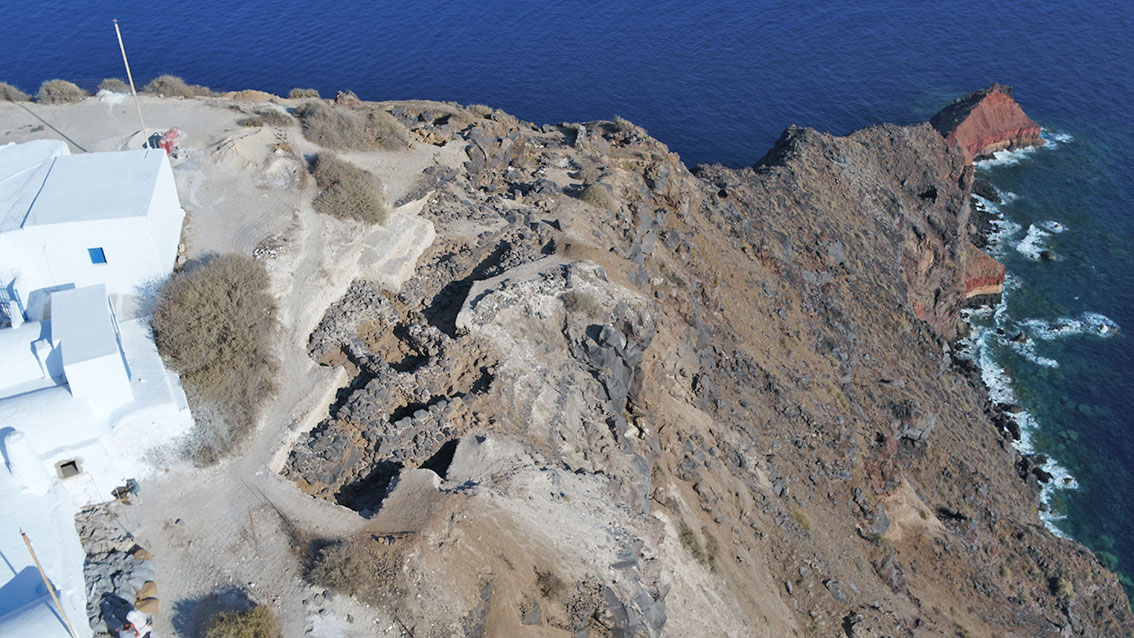 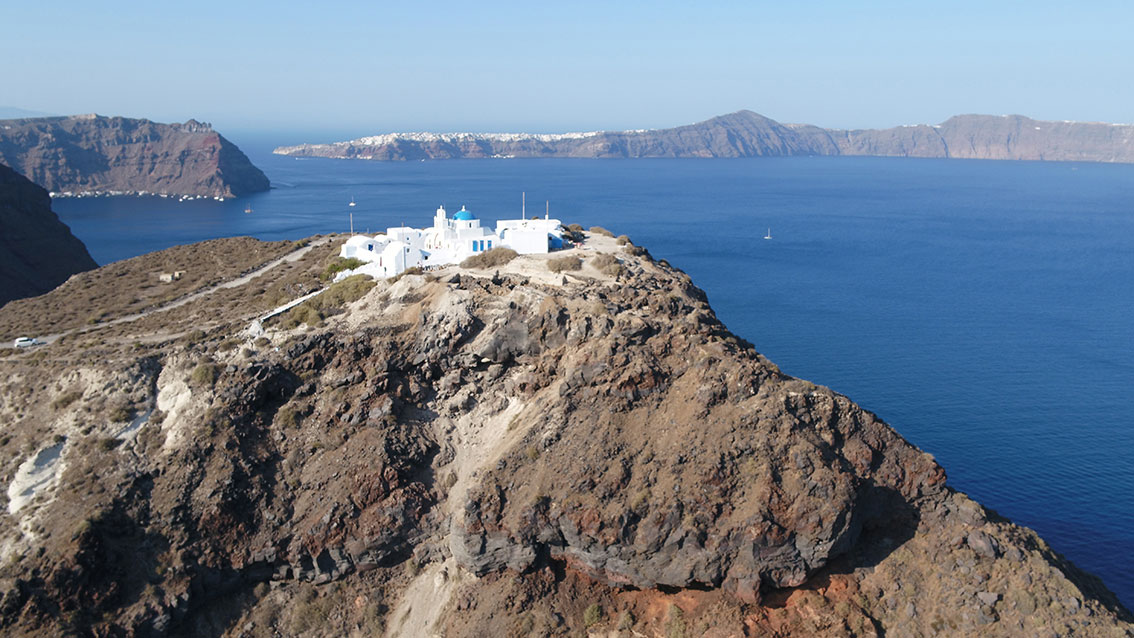 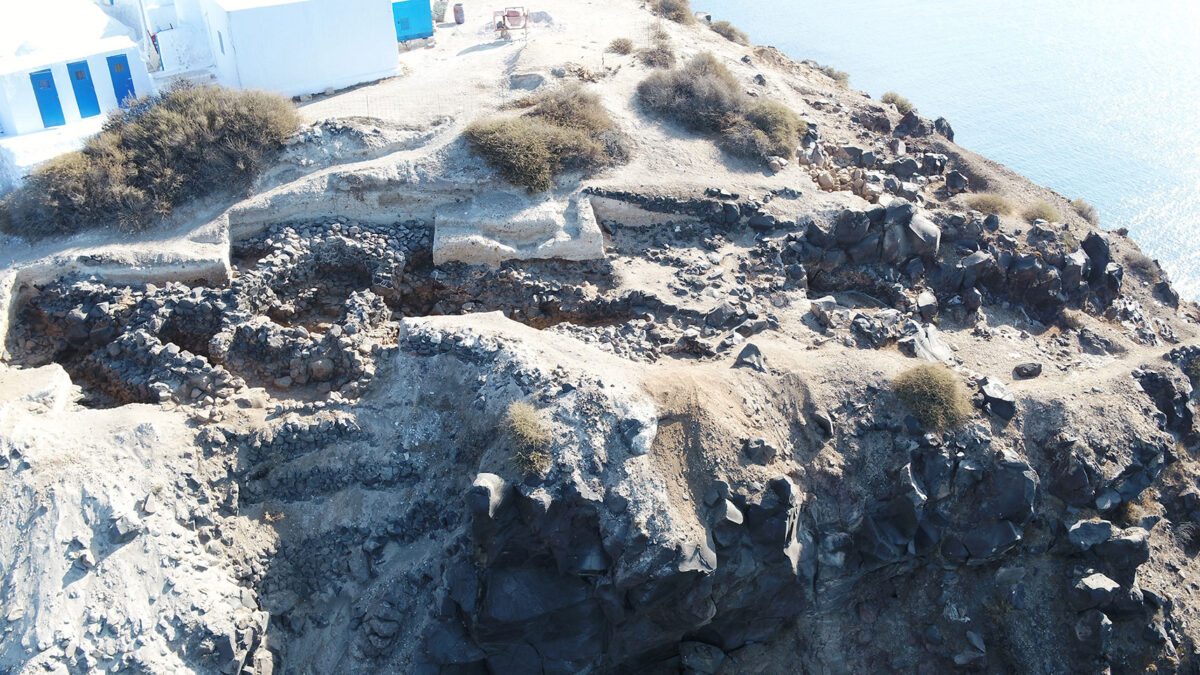 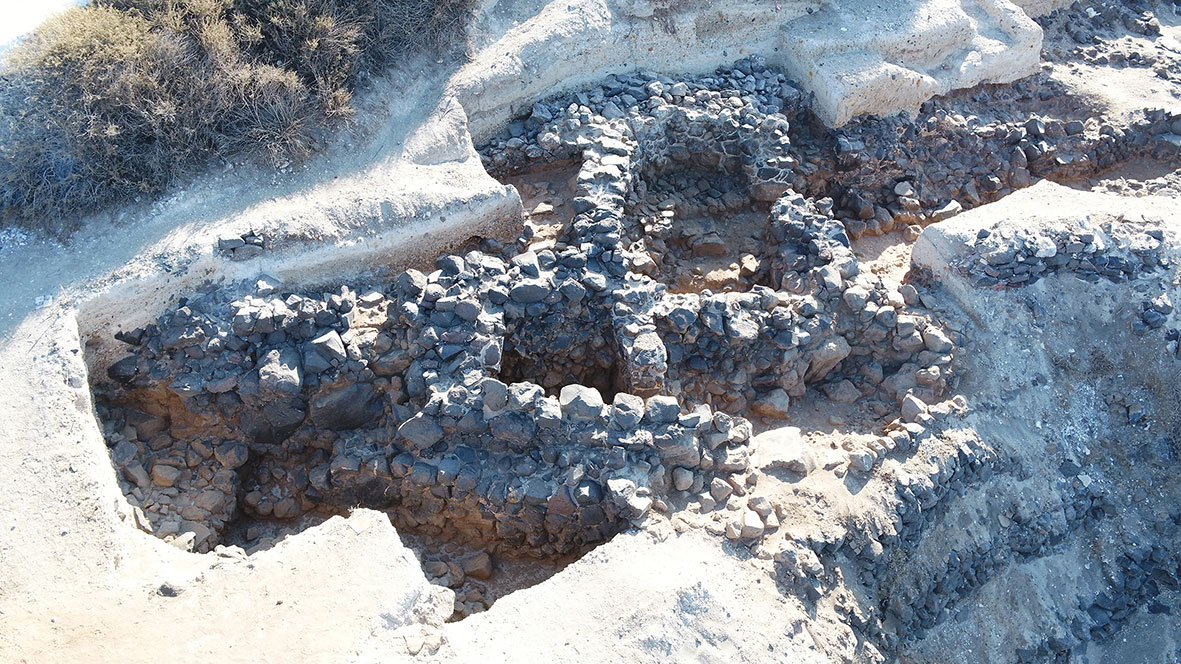 Therasia: the new excavation finds from the prehistoric settlement

At the site of Koimisis

The 7th season of systematic excavation took place at the site of Koimisis on Therasia from the 4th to the 30th of August 2021. The excavation concerns the exploration of the Early Cycladic and Middle Cycladic settlements situated around the monastery of Panaghia Koimisis at the island’s southern tip, on the edge of the caldera cliff created by the great Minoan volcanic eruption of the 16th century BC (fig. 1).

During this year’s excavation season, the work focused on two spots. The first and most important was in the northwestern part of the settlement, where in the previous excavation period very strong retaining walls had been discovered at a height of almost two meters, two building interiors (X1, X2), one containing a bench, and an exterior courtyard also with a bench. The layers of lava and ash from the eruption of the Santorini volcano covering this part of the settlement remains contributed considerably to their being perfectly preserved (fig. 2). The above areas were thoroughly excavated thus clarifying matters of their form, nature and chronology, with the presence of both Middle Cycladic layers and Early Cycladic phases of different periods, which in some places possibly go back to the beginning of the Early Cycladic period. A new area was also excavated to the south, situated on the current edge of the cliff which indicated the extent of the slope collapse caused by the eruption. The latter area is connected through a door with a narrow elongated room of the Early Cycladic period. In 2019, near this door and almost on its threshold, a seal was found with fragments of writing.

The interior of the building with the bench (Area 2/ X2), where there was an extremely important Middle-Cycladic deposit, yielded the greatest surprises. Completing the excavation of the area to the north and east, it was found that it is a second elliptical building following the one discovered earlier in the southeastern part of the settlement. Overall, it has the same monumental form and similar orientation, while the arch is encased in two stone piles to its left and right, very probably for the purpose of its retaining (fig. 3). The building is significantly larger, preserved at a greater height and has a transverse structure that takes up the arch’s end.

The excavation was also completed in the open-air courtyard, onto which the above building opens and where a tiered passage ends that follows the contour from east to west . Its extensions became visible, the terrace that defines it to the south was demarcated, additional tiers were unearthed in the passage as was another bench on the north side of the courtyard. The findings in the courtyard were also interesting; many stone tools, obsidian and large millstones. It was obviously a workplace. The pottery was mainly Middle Cycladic but interspersed with the finds from the Early Cycladic era. There were also some remnants of tools for weaving that indicate the practice of spinning yarn and possibly weaving.

One of the most important facts from this season’s excavation is the possibility of the large external retaining wall to the southwest having been used as fortification due to its proximity to a structure resembling a horseshoe-shaped bastion. This is reinforced by the finding of a small external stairway in the monumental wall, which leads towards the interior and the plateau at the top (fig. 3). Since the other Cycladic settlements of the period are walled, this was also probably the case in the settlement of Koimisis on Therasia.

Lastly, in the region of the three terraces overlooking the hill’s eastern slope, a small trench was opened to determine the direction of the tiered passage that intersects the terraces perpendicularly, ascending the east slope to the top of the hill. Apparently the passage turns north to a series of successive natural rocks. This direction of the small road indicates that the settlement also extended to the northeast, behind today’s monastery. The chronological horizon here is exclusively Early Cycladic, as in the adjacent terraces.

“This season has been a maturation phase”, said the excavation team in its press release. “Areas whose excavation had begun last year were investigated in more detail, but with the intermediate study we were able to develop a more accurate stratigraphy with a broader context. The settlement of Koimisis, initially a bit vague as to its form, began to acquire features of urban planning, with its street plan, the wise configuration of uneven levels, its multiple openings (fig. 4). We slowly also begin to understand its asymmetric rules. Its architecture consists of an alternation of curvatures, strong walls, retaining walls, floors, benches, openings, enigmatic platforms and volcanic rocks. The settlement stubbornly climbs, in the literal and metaphorical sense and invites us to try to understand logic and thought through matter”.

The excavation is a collaboration between the Department of History of the Ionian University (Kostas Sbonias), the University of Crete (Iris Tzachili) and the Cyclades Ephorate of Antiquities (Maya Efstathiou), with the scientific collaboration of Clairy Palyvou (AUTh) and an interdisciplinary team of collaborators. The excavation and study was carried out with the contribution of the General Secretariat of the Aegean and Island Policy and the Institute of Aegean Prehistory (INSTAP).