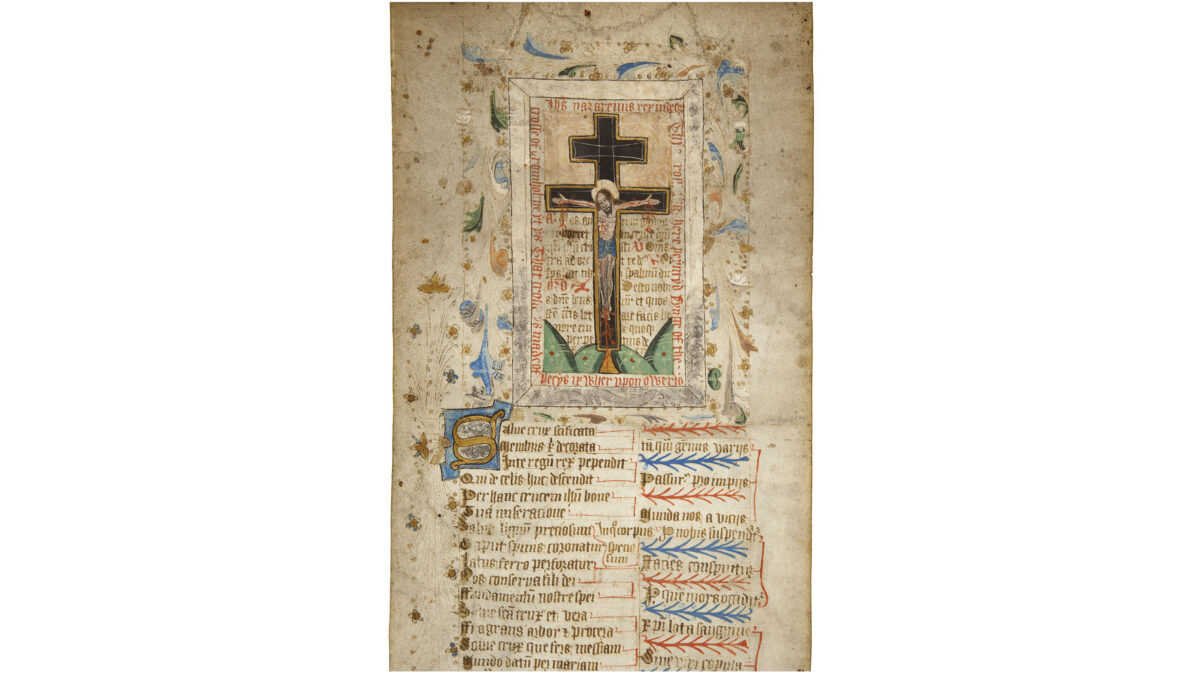 A rare English illuminated medieval prayer roll, believed to be among only a few dozen still in existence worldwide, has been analyzed in a new study to expose Catholic beliefs in England before the Reformation in the sixteenth century.

Now in private hands and previously unknown to experts, this meter-long roll provides fresh insights into Christian pilgrimage, and the cult of the Cross before Henry VIII’s dissolution of the monasteries.

Examination of the ancient roll’s illustrations and text, including religious verse in Latin and English, are published in the peer-reviewed Journal of the British Archaeological Association.

“It gives insight into the devotional rituals connected to a large crucifix (‘Rood’) at Bromholm Priory, in Norfolk, and uncovers a direct link between this 16th century artifact and a famous religious relic once associated among Christians with miracles.”

The ‘Rood of Bromholm’, as it is known to historians, supposedly contained a fragment of the cross upon which Jesus was crucified. The relic transformed the Priory into a popular pilgrimage site mentioned by Geoffrey Chaucer and in The Vision of Piers Plowman.

Images of the Rood in black, with gold outlines, feature several times in the Bromholm roll, and there is one direct reference to ‘the crosse of bromholme’.

Turner’s analysis suggests a prosperous pilgrim was possibly the owner of the Bromholm prayer roll—made from two pieces of vellum stitched together, and bought by a private collector in the 1970s.

“The roll reflects a time when the laity (non-clergy) had a real belief in both visible and invisible enemies,” says Turner, who has worked at Tate Britain, the Arts Council, and as a consultant for Christie’s and at the Courtauld.

“For their owners, prayer rolls…were prized as very personal inspirations to prayer, although during the Reformation and after they were commonly undervalued and dismissed.

“The survival of such a magnificent roll for over 500 years is therefore remarkable.”

Attaching animal skin pieces end to end in a continuous strip to make a ‘roll’ was once the standard method of presenting text. Few medieval prayer rolls survive today because they lacked covers yet were made to be handled. This one is 13cm wide, by a meter long.

Worshippers regularly touched or kissed images of Jesus on the cross in an attempt, says Turner, “to experience Christ’s Passion more directly and powerfully”. Indeed, the historian reveals abrasion marks are visible on the Bromholm roll where the owner has engaged in such a ‘devotional act identified in other similar rolls’.

Turner has been able to estimate the document’s age through a reference in the roll to ‘John of Chalcedon’ or John Underwood, the penultimate prior of Bromholm. A passionate supporter of the Roman Catholic church, Underwood became auxiliary bishop of Norfolk in 1505 then lost his position in 1535 so it’s likely the roll was made between these dates.

Further connections between the roll, the Rood and Underwood can be made through the imagery of the five wounds Christ received during his crucifixion, according to the study.

Symbols representing the five wounds are depicted on Underwood’s tomb in Norwich, despite not being commonly found in Norfolk’s churches. In addition, the five wounds were focal to Bromholm Priory’s key devotional feasts—the Passion and the Exaltation of the Cross—when pilgrims came to venerate the Rood.

The original owner of the roll is likely to have been a ‘devout worshiper’ familiar with Bromholm’s feasts, says Turner. A patron of the priory, a member of the local Paston family, or a friend of John Underwood’s are among her suggestions.

Today, the priory stands in ruins in a field near the village of Bacton. As to the Rood of Bromholm’s fate, the study suggests it was taken to London. This is according to a letter written in 1537 to Thomas Cromwell by Sir Richard Southwell, a courtier from Norfolk.

After that, the trail appears to go cold, according to Turner, who adds it is ‘presumed to have been destroyed in London with many other relics, although its fate remains uncertain’.