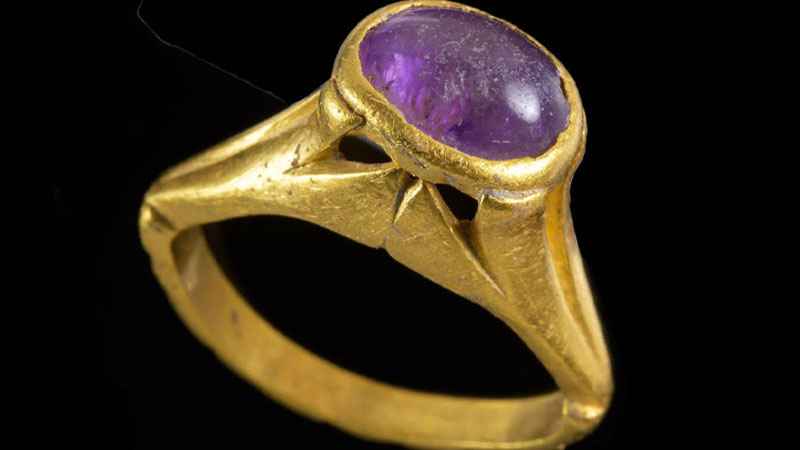 Spectacular ancient gold ring unearthed in an excavation in Yavne

At a site where a huge winery operated

by Archaeology Newsroom
In the huge excavation conducted at Yavne by the Israel Antiquities Authority​, as part of the Israel Land Authority’s initiative to expand the city, a spectacular gold ring was recently uncovered, with an inlay of a purple stone.
An examination of the ring by Dr. Yotam Asher at the analytical laboratory of the Israel Antiquities Authority, showed that the stone is mostly made of silica – a material from which many gemstones are composed. This examination ruled out the possibility that the purple inlay is made simply of glass. The ring weighs 5.11 grammes.
Dr. Amir Golani, an expert on ancient jewelry at the Israel Antiquities Authority, who examined the find, said that “the person who owned the ring was affluent, and the wearing of the jewel indicated their status and wealth. Such rings could be worn by both men and women”. Golani adds that, “a semi-precious stone, called an amethyst, was placed in the ring. Amethysts are mentioned in Bible as one of the 12 precious stones worn by the high priest of the Temple on his ceremonial breastplate.  Many virtues have been attached to this gem, including the prevention of the side effect of drinking, the hangover”.
This characteristic attributed to the stone is particularly interesting, given the context in which the ring was discovered, at a site where a huge winery operated, the largest in the world known from the Byzantine period.
“Did the person who wore the ring want to avoid intoxication due to drinking a lot of wine? We probably will never know,” says Dr. Elie Haddad, the director of the excavation on behalf of the Israel Antiquities Authority, together with Liat Nadav-Ziv and Dr. Jon Seligman, adding “the ring was found just 150 metres from the remains of a long warehouse, which was used to store wine jars (amphorae)”. Some of the jars were found upside down on their mouths and it may have been a warehouse full of empty jars before they were taken to the winepresses, to fill with wine”. It is possible that the splendid ring belonged to the owner of the magnificent warehouse, to a foreman, or simply to an unlucky visitor, who dropped and lost their precious ring, until it was finally discovered by us.”
Researchers are debating the date of the ring. It was found in a fill dated to the end of the Byzantine period and the beginning of the Early Islamic period – the 7th century CE, but it is possible that the ring, due to its beauty and prestige, was transmitted from generation to generation over the centuries. Gold rings inlaid with amethyst stone are known in the Roman world, and it is possible that the ring’s find belongs to the elites who lived in the city as early as the 3rd century CE.
According to Eli Eskozido, director of the Israel Antiquities Authority, “The small, everyday finds that are discovered in our excavations tell us human stories and connect us directly to the past. It is exciting to imagine that the man or woman to whom the ring belonged, walking right here, in a different reality to what we know in today’s city of Yavne”.
​