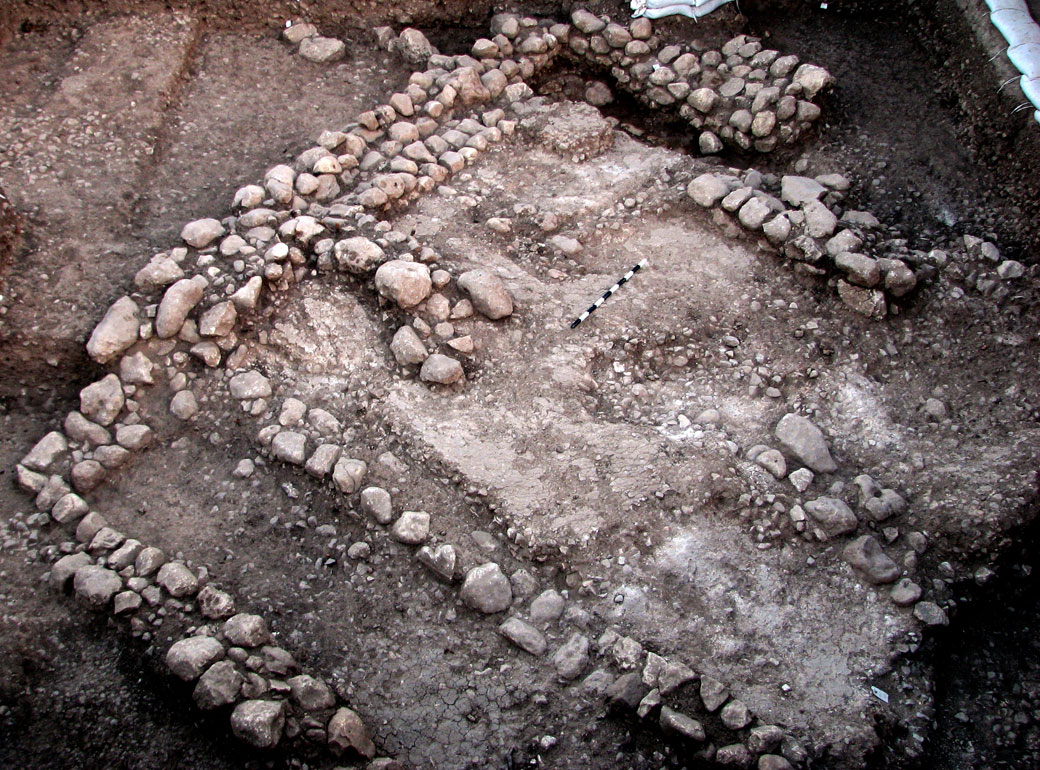 The 12.000 year-old building dates from the time of the earliest known domestication of plants and animals

A remarkable archaeological find in the Judean lowlands southwest of Jerusalem includes a 6,000 year-old cultic temple and a 10,000-year-old house.

The finds were located at the site of Eshtaol during routine archaeological digs conducted ahead of a planned expansion of Route 38, the main access road to Beit Shemesh, Israel. The building is the oldest ever found in the area, and constitutes remarkable “evidence of man’s transition to permanent dwellings,” researchers said Monday.

“Settlement remains were unearthed at the site, the earliest of which dates to the beginning of the eighth millennium BCE and latest to the end of the fourth millennium BCE,” the authority said in a statement Monday.

“We uncovered a multitude of unique finds during the excavation,” said Amir Golani, one of the excavators for the Antiquities Authority. “The large excavation affords us a broad picture of the progression and development of the society in the settlement throughout the ages. Thus we can clearly see that in the Early Bronze Age, 5,000 years ago, a rural society made the transition to an urban society. We can see distinctly a settlement that gradually became planned, which included (streets) and buildings that were extremely impressive from the standpoint of their size and the manner of their construction. We can clearly trace the urban planning and see the guiding hand of the settlement’s leadership that chose to regulate the construction in the crowded regions in the center of the settlement and allowed less planning along its periphery.”

Labeling it “a fascinating glimpse into thousands of years of human development,” the Israel Antiquities Authority, together with the Netivei Israel Company that is carrying out the highway expansion, invited the public to visit the excavation site during a planned guided tour held yesterday, Wednesday, November 27.

The finds allow the researchers to “trace the development of a society which became increasingly hierarchical,” Golani said.

The oldest building found dates from the time of the earliest known domestication of plants and animals.

“Whoever built the house did something that was totally innovative because up until this period (local human groups) migrated from place to place in search of food. Here we have evidence of man’s transition to permanent dwellings, and that in fact is the beginning of the domestication of animals and plants; instead of searching out wild sheep, ancient man started raising them near the house,” researchers said in a statement.

The researchers included Golani, Ya‘akov Vardi, Benyamin Storchan and Ron Be’eri, who serve as excavation directors for the Antiquities Authority.

The house is the oldest structure ever found in the Judean lowlands, they said, dating back to the period known to archaeologists as the Pre-Pottery Neolithic.

“The building, almost all of which was found, underwent a number of construction and repair phases that allude to its importance,” they said.

Near the building, excavators found a collection of nine flint and limestone axes placed side by side.

“It is apparent that the axes, some of which were used as tools and some as cultic objects, were highly valued by their owners. Just as today we are unable to get along without a cellular telephone and a computer, they too attributed great importance to their tools. Based on how it was arranged at the time of its discovery it seems that the cluster of axes was abandoned by its owner for some unknown reason,” the researchers concluded.

But the building wasn’t the only find at the site. A handful of buildings from the end of the Chalcolithic period, some 6,000 years ago, was found nearby. At the site, excavators found a six-sided stone column standing some 1.3 meters (51 inches) high and weighing several hundred kilos.

“The standing stone was smoothed and worked on all six of its sides,” the archaeologists said, explaining that its broad face was oriented eastward and concluding that the find ”alludes to the presence of a cultic temple at the site.”

“In the past, numerous manifestations have been found of the cultic practice that existed in the Chalcolithic period. However, from the research, we know of only a few temples” located at Ein Gedi and Teleilat Ghassul in present-day Jordan.