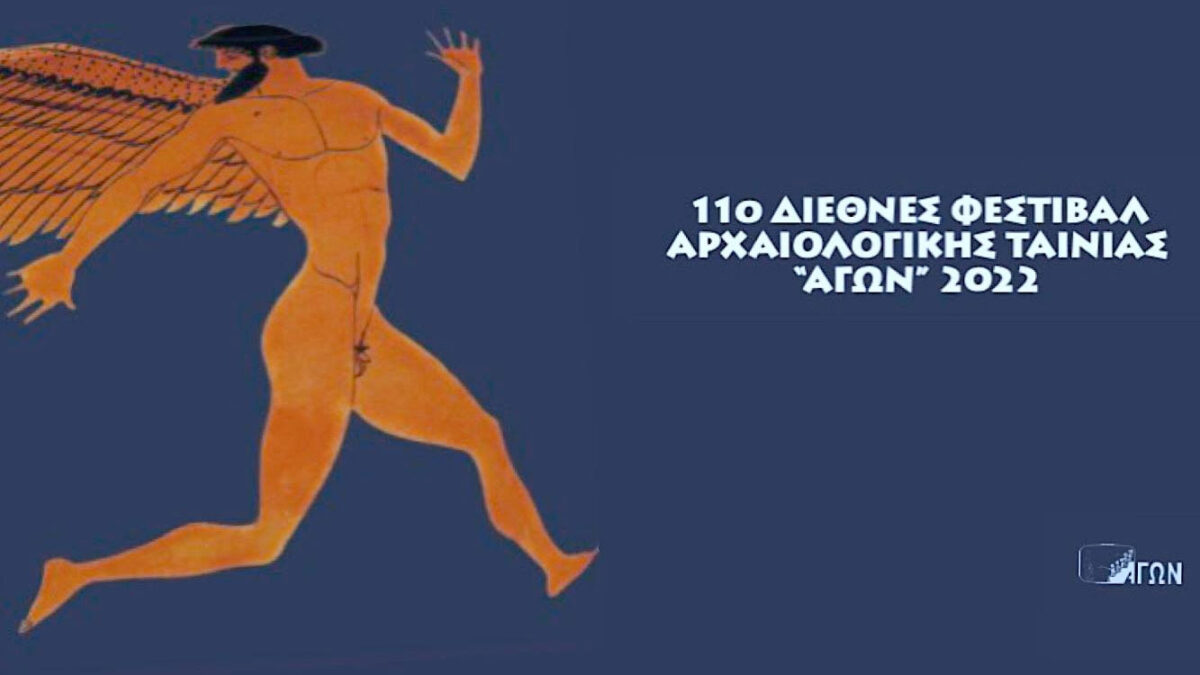 The deadline for submission of entries expires on December 20, 2021.

The 11th International Archaeological Film Festival AGON will take place at the premises of the Greek Film Archive, on May 10-16, 2022.

Memi Spyratou was inspired to establish a biannual Archaeological Film Festival (biennale)in Greece in 1995 and, after having received three awards at archeological festivals abroad (France, Italy, Belgium), she felt this was a national issue when Europe was buzzing with Archaeological film festivals (France, Italy, Belgium, Germany, Switzerland, to name but a few) while Greece, a country intertwined with the very essence of archeology, had nothing similar to present.

Thus, the First International Meeting of the Archaeological Film of the Mediterranean Area-AGON, took place in 1996, mainly thanks to the practical support of journalist Lena Savidis of the daily newspaper “TA NEA”, and archaeologist Anna Lambrakis, publisher of the magazine “Archaeology & Arts”.

In the 25 years of its course, AGON has evolved into an institution not only of pan-Hellenic but also of international scope. This is evidenced by the collaborations with important organizations (National Gallery of Art-Washington, Goethe Institut, Embassy of France, Thessaloniki International Festival, Ministry of Culture, Ministry of Tourism, Museum- Archive ERT, Hellenic Cinema Center, etc.) and personalities from the field of culture and science, both in Greece and abroad, the screening of films from major networks (BBC, RAI, ARTE, ZDF and of course ERT and RIK), but also the great acceptance by the general public that has faithfully been following the events of the festival all these years.

The thematic of the festival is archeology in the broad sense of the word: Antiquity, Middle Ages, folk arts, traditions, industrial archeology, cultural heritage, the recording of every world that is by norm getting lost, in other words, the today that becomes the archeology of tomorrow, bringing in contact people, not only from Greece but also from all over the world, people-dreamers of a better life.

The dream of a universal state based on the concepts of freedom, equality and justice dated as far back as the very beginning of human existence. And while it may sound utopian, we insist it is not impossible. Therefore, we keep hoping. If not for us, we hope for the future man, the universal “we”.

That is why we are dedicating the 11th INTERNATIONAL ARCHAEOLOGICAL FILM FESTIVAL AGON-2022 to the world-famous composer Mikis Theodorakis who, first among equals, envisioned the “Ecumenical Community”, condensing the vision of archaeological research to the laconic quote: “Man is a duty”.

Distinguished personalities from the fields of cinema, archeology, folklore, and journalism, participate in the jury of the 11th Archaeological Film Festival “AGON”

The Selection Committee, which is responsible for selecting the films to be screened at the Festival, consists alphabetically of: Kyriaki Beyoglou, journalist; Aris Fatouros, director-producer, consultant for the Parliament-Television program; Evangelos Karamanes, director of the Hellenic Folklore Research Center of the Academy of Athens; Peggy Lagiou, producer; George Mouzakitis, director-producer; Pepi Ragoussi, journalist; Georgia Salampassi, director; Giannis Simiriotis, specialist in new technologies; Zeta Xekalaki, archaeologist, member of the editorial team of the magazine “Archeology and Arts”.

The Festival is sponsored by the Hellenic Ministry of Culture.

The deadline for submission of entries expires on December 20, 2021.

Information on the terms of participation can be obtained by visiting the website of the International Archaeological Film Festival AGON, www.agonfestival.com/.