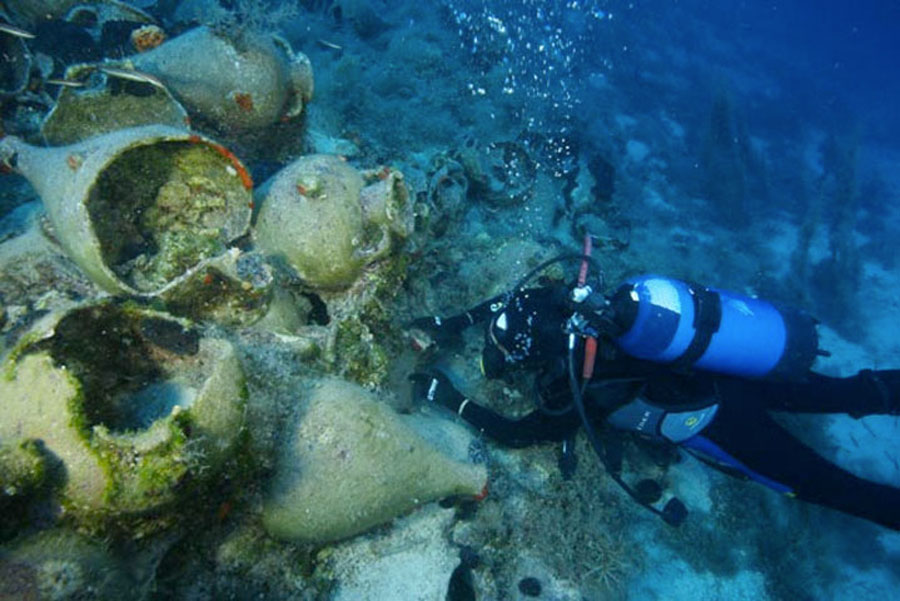 The Department of History, Archaeology and Social Anthropology (IAKA) of the University of Thessaly organized an online lecture by George Koutsouflakis (Assistant Professor of IAKA) on “Marine archaeological research in the Fourni archipelago: an inexhaustible field of research and education”.

“The archipelago of Fourni (ancient Korseai), consists of twenty islands, islets and rocky islets and is situated in the Eastern Aegean, south of Samos and Ikaria. It is seldom mentioned by ancient writers and geographers, while the land depositions of these islands have never been the subject of any systematic archaeological research. Everything we know about these islands comes from a handful of laconic descriptions by 19th century travelers, a few existing monuments, a small corpus of inscriptions and the sporadic rescue excavations of the Archaeological Service” says G. Koutsouflakis on the subject of his talk and continues by saying: “In 2015, the Ephorate of Underwater Antiquities started an ambitious project of documenting the underwater cultural reserve of Fourni. The project’s ultimate goal was to understand the importance of small and largely ‘anonymous’ island units in a wider, supra-local network of shipping and trading activities, by locating, systematically recording and documenting ancient, medieval and modern shipwrecks. In the five research periods that followed, a total of 58 shipwrecks and thousands of individual finds were discovered, dating from the Archaic period to modern times, turning Fourni from an uncharted archaeological site into one of the richest in the Mediterranean. Most shipwrecks carried cargoes of amphorae.

“However, what increases scientific interest is not so much the large number of shipwrecks as the origins of their cargoes. Amphorae were discovered in Fourni from the Aegean, the Black Sea, Cilicia, Syria, North Africa, Italy and Spain, proving that this island complex was adequately connected even with overseas sea routes.

“This unprecedented concentration of such a large number of shipwrecks in one region and their dispersion across all depth zones coupled with the diversity of their cargoes, make the Fourni Archipelago an ideal field for training students in the techniques and methodology of underwater archaeology.”

The lecture took place on Wednesday, January 19 at 18:00, in the “IAKA Events” group of MS-TEAMS.