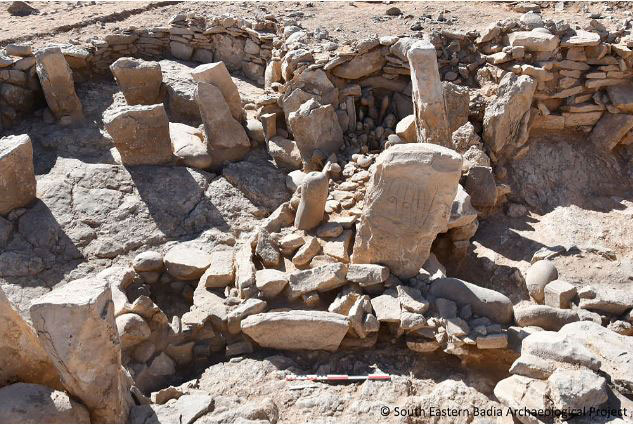 The South Eastern Badia Archaeological Project (SEBAP), a French-Jordanian joint scientific program, uncovered a Neolithic shrine dating from around 9,000-years-ago, in the Badia region of the Khashabiyeh Mountains: two standing stones that depict carved anthropomorphic figures and an altar and hearth.

Desert Kites were used for trapping game animals, consisting of long dry-stone walls converging on a neck, opening into a confined space used to slaughter prey.

In 2013, SEBAP identified the first occurrence of Late Prehistoric mass hunting traps known as “Desert kites” in a remote area of the south eastern desert of Jordan, to the east of the Jafr basin in Jibal al-Khashabiyeh area. Such structures are widespread across the Middle eastern and south west asian arid landscapes (mainly from central Saudi Arabia, through Jordan, Syria, Armenia, Turkey and as far as Kazakhstan). The “desert kites” are spectacular: constituted of two or more long walls converging towards an enclosure, these mega structures can reach over several kilometers in length, and they are sometimes organized in chains of contiguous and uninterrupted structures, maximizing the potential for wild game capture. While most of the recent research on such structures tended to attribute them to the 4th-3rd millennia BC, SEBAP was able to date the “kites” to as early as the Neolithic period, ca. 7000 BC (Late Pre-Pottery Neolithic B period, Late PPNB; through radiocarbon and OSL chronometric dating methods), pushing back in time the origin of the phenomenon to much earlier than previously thought. The desert kites in Jibal al-Khashabiyeh are in fact the earliest large-scale human built structures worldwide known to date.

These results had far-reaching consequences for our understanding of human developments in these regions, as they attest for the rise of extremely sophisticated mass hunting strategies, unexpected in such an early timeframe and necessitating a collaborative organization of the human groups. They evidence an exploitation of animal resources beyond subsistence purposes, involving exchange with human groups of neighboring regions. But the most significant result of these last years of research of SEBAP was certainly the discovery, for the first time ever in the Middle East, of the occupation campsites directly related to the hunters using the “Desert kites”. While the relationship of the occupation with the kites is corroborated by an array of evidence (the proximity of the campsites to the kites, the contemporaneous dating of both site types, and the material remains including huge quantities of gazelle bones resulting from the processing activities related to mass hunting), the investigation of these campsites allows to provide invaluable information on the socio-economic, and techno-cultural background of the human groups involved in these hunting strategies. The settlements, represented by various organizations of semi-subterranean circular hut like dwelling units, provide during excavations an extremely rich and diversified material culture, with notably a specific lithic industry, which has led the team to define this occupation as a specific cultural entity termed the “Ghassanian” (in reference to a local toponym). While in the neighboring regions of the “Fertile Crescent” sedentary villagers communities were involved at the time in farming and herding, it clearly appears from the work undertaken that the “Ghassanians” were specialized hunters for which mass hunting of gazelle using “Desert kites” traps was at the center of their cultural, economic and even symbolic life in these marginal zones.