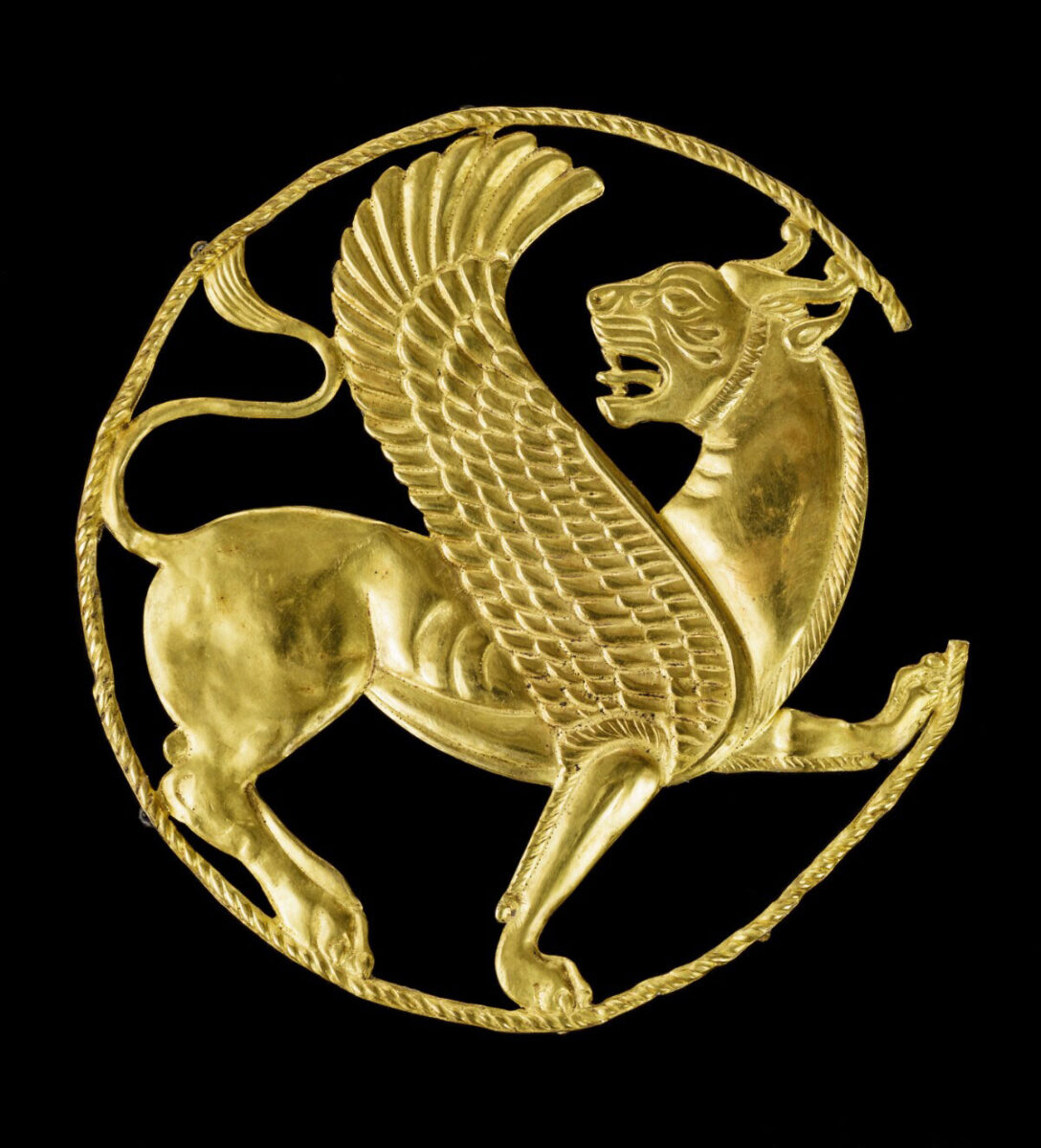 Ancient Iran and the Classical World at the Getty Villa Museum

Ancient Iran, historically known as Persia, was the dominant nation of western Asia for over a millennium (about 550 BC–AD 650), with three native dynasties—the Achaemenids, Parthians, and Sasanians—controlling empires of unprecedented size and complexity.

Their principal military rivals throughout this period were the ancient Greeks and Romans, with whom they nevertheless enjoyed an active exchange in many aspects of architecture, religion, and court culture, as is demonstrated in the artworks they produced.

This spring, the Getty Villa Museum presents the exhibition Persia: Ancient Iran and the Classical World, the first major U.S. exhibition to highlight the relationship between the Classical World and Ancient Iran. The exhibition has opened on April 6, 2022. In addition to the spectacular ancient works on view that explore the artistic and cultural connections between the rival powers of Iran, Greece, and Rome, the exhibition is supported by two innovative digital experiences: a 360-degree immersive film onsite at the Villa and a highly interactive online website at getty.edu/persepolis.

“The military rivalry between the ancient Persian empires that controlled much of the modern Middle East, and the Greeks and Romans of the eastern Mediterranean, determined the geopolitical map of Eurasia from Britain in the west to the border of India in the east for over a thousand years. In the early 5th century BC, against all odds, the Greeks repulsed a series of Achaemenid invasions that would have changed the cultural trajectory of Europe. Two and a half centuries later, Alexander the Great’s conquest of the East brought down the Achaemenids but also inspired an epochal cross-fertilization of the two cultures and traditions. The rise of the Romans as the major Mediterranean power from the 2nd century BC made a clash of titans inevitable. More than once the destinies of Europe and the Middle East hung on the outcome of mighty battles between the Roman emperors and the Parthian and Sasanian kings. Yet throughout all these violent vicissitudes, an active exchange of goods, languages, ideas, faiths, and artistic visions, reflecting a strong mutual respect, flourished in both directions. We see this most vividly in the imperial imagery celebrating their kings and rulers that was propagated by both the Persians and their Greek and Roman adversaries. As we ponder the most significant turning points in Eurasian history, there was perhaps no more momentous encounter than that between Persia and the Classical World,” says Timothy Potts, Maria Hummer-Tuttle and Robert Tuttle Director of the J. Paul Getty Museum.

“The many spectacular objects on view are extraordinary expressions of Persian political and cultural identity, many of them among the most famous masterpieces of Persian art. I hope this exhibition will convey how fruitful the intermingling of very different artistic and other cultural traditions was for both cultures, as can still be seen in aspects of our visual arts today.”

Potts adds: “I am especially pleased that visitors to the exhibition will also be able to explore some of the highlights of ancient Iranian art and architecture through digital technologies. Two innovative digital experiences—one an immersive on-site experience at the Villa; the other accessible online—will allow visitors to walk in the steps of a Persian dignitary through a digital reconstruction of the spectacular Achaemenid palace of Persepolis. These new tools, in partnership with the latest scholarship, can provide dynamic, interactive engagement with distant places and cultures, and we hope to expand their use in the future.”

The ancient works in the exhibition include royal sculpture, spectacular luxury objects, religious images, and historical documents assembled from major museums in the United States, Europe, and the Middle East.

“Many remarkable objects from Ancient Iran spanning approximately 1,200 years will be on display for the first time in the U.S.,” adds Jeffrey Spier, Anissa and Paul John Balson II Senior Curator of Antiquities at the J. Paul Getty Museum. “We are honored to present this exhibition in Southern California, home to the largest Iranian community outside Iran, and to leading academic centers dedicated to the study and appreciation of Iranian history, art, and culture.”

The Persian king Cyrus the Great and his Achaemenid successors established the largest and most powerful empire of the ancient world. Their significance in history, however, lies not just in territorial or military might but in their creation of a successful model for centralized rule over multiple peoples with different customs, religions, laws, and languages, allowing diverse cultures to coexist and thrive within a unified state structure. Political institutions and artistic ideas introduced by the Achaemenid Persians considerably influenced later empires, providing a foundation for the Seleucid Greeks, Parthians, Romans, and Sasanians.

The first part of the exhibition examines the establishment of the Achaemenid Empire in mid-6th century BC, when Cyrus the Great captured western Asia Minor (in present-day Turkey) and conquered the Greek settlements there. Achaemenid sculpture, silver vessels, and jewelry are on display alongside Greek depictions of the Persian wars (490–79 BC). The Greek cities long established on the western coast of Asia Minor and the native people in nearby Lydia, Caria, and Lycia at first resisted Persian demands for submission but eventually came to terms with living in a great empire. These regions produced works both in Greek and Persian style, reflecting the complex cultural influences around them.

The second section of the exhibition begins around 330 BC, following Alexander the Great’s conquest of the Achaemenid Empire. The victorious Greeks inherited rule over Iran and much of the ancient Middle East for some time, but in the 3rd century BC another Persian dynasty, the Parthians, emerged and soon became the dominant state of the Near East, remaining in power for nearly five hundred years. It was also the primary rival of Rome, which replaced the Greeks as the new superpower of the Mediterranean, with the borderlands of Mesopotamia being a frequent battleground. The Parthian art on view in the exhibition, including luxury silver drinking vessels made for the Parthian aristocracy, is highly eclectic, displaying a mixture of Greek, Mesopotamian, Achaemenid, and nomadic Iranian influences.

The final section of the exhibition is devoted to the Sasanian Empire, which, beginning in AD 224, created a new Iranian self-image with distinctive trappings of kingship and splendid royal art, a more centralized administration, the founding of many cities, and an aggressive military policy. Despite near constant warfare, the Romans and Sasanians recognized the advantages of maintaining a balance of power and were often allied in fighting mutual enemies until the Arab conquest in AD 651. On display are palace decorations and Sasanian silver plates and vessels ornamented with depictions of royal court life, along with Late Roman and Byzantine silver that served similar purposes.

The exhibition is supported by a fully immersive film that transports visitors into the lavish palaces and audience halls of Persepolis during its height as the ceremonial capital of the Achaemenid Empire. The five-minute “Palace Experience” takes the audience along the route ancient visitors would have taken through the capital, from the Gate of All Nations to the Apadana and into other structures within the palaces and audience halls. Located in a first-floor gallery at the Villa, the film provides a 360-degree HD experience employing the same new media technology used by Disney’s The Mandalorian. (“The Palace Experience” requires a separate advance, timed ticket, which is free and available onsite.)

A separate online digital experience created in conjunction with the exhibition allows visitors the opportunity to soar over a 3-D re-creation of Persepolis and take an interactive “walk” through the palaces, terraces, audience halls, and chambers of the massive complex in southern Iran, enlivening the many relief sculptures and architecture with their original colors and textures.

As visitors scroll their way through the rooms, they can zoom in on 3-D images of the coins, vessels, inscriptions, and reliefs that would have been used in these spaces. This highly interactive web experience will be available in eight languages, including Persian, Arabic, Hindi, Chinese (simplified and traditional), Spanish, French, and English, bringing ancient Persepolis to life for visitors around the world.[The online experience is available now at getty.edu/persepolis.

Persia: Ancient Iran and the Classical World will run at the Getty Villa Museum through August 8, 2022. The exhibition is curated by Timothy Potts, Jeffrey Spier, and Sara E. Cole, assistant curator of antiquities at the J. Paul Getty Museum. A catalogue written by the curators accompanies the exhibition. Dr. Ali Mousavi, adjunct assistant professor of Iranian archaeology, and Dr. Farzad Amoozegar, director, Iranian music program and Persian music ensemble at UCLA, were consultants on the two digital initiatives.

The exhibition is made possible through the generosity of several Getty partners, including:

-Exhibition Academic Partner: Pourdavoud Center for the Study of the Iranian World, UCLA

-The exhibition catalogue is generously supported by Jeffrey P. Cunard.