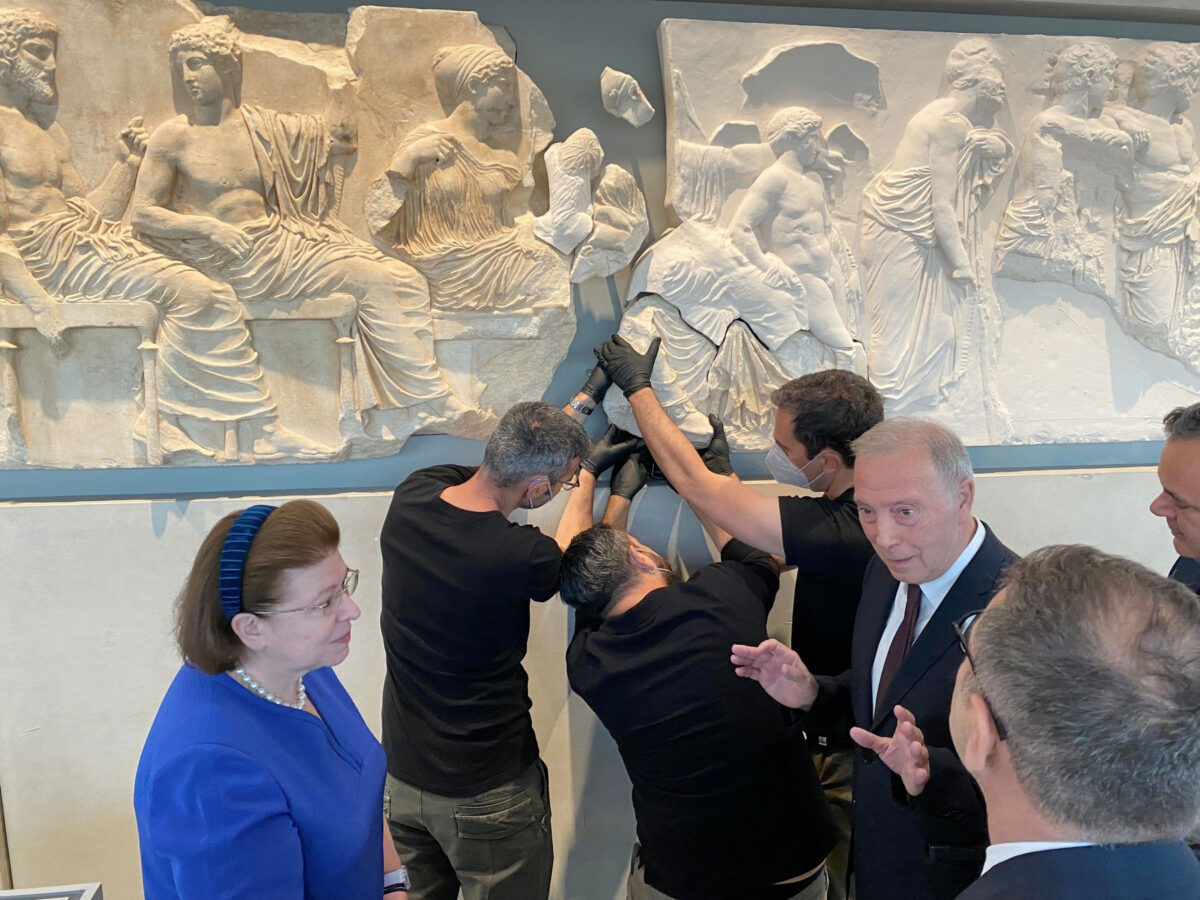 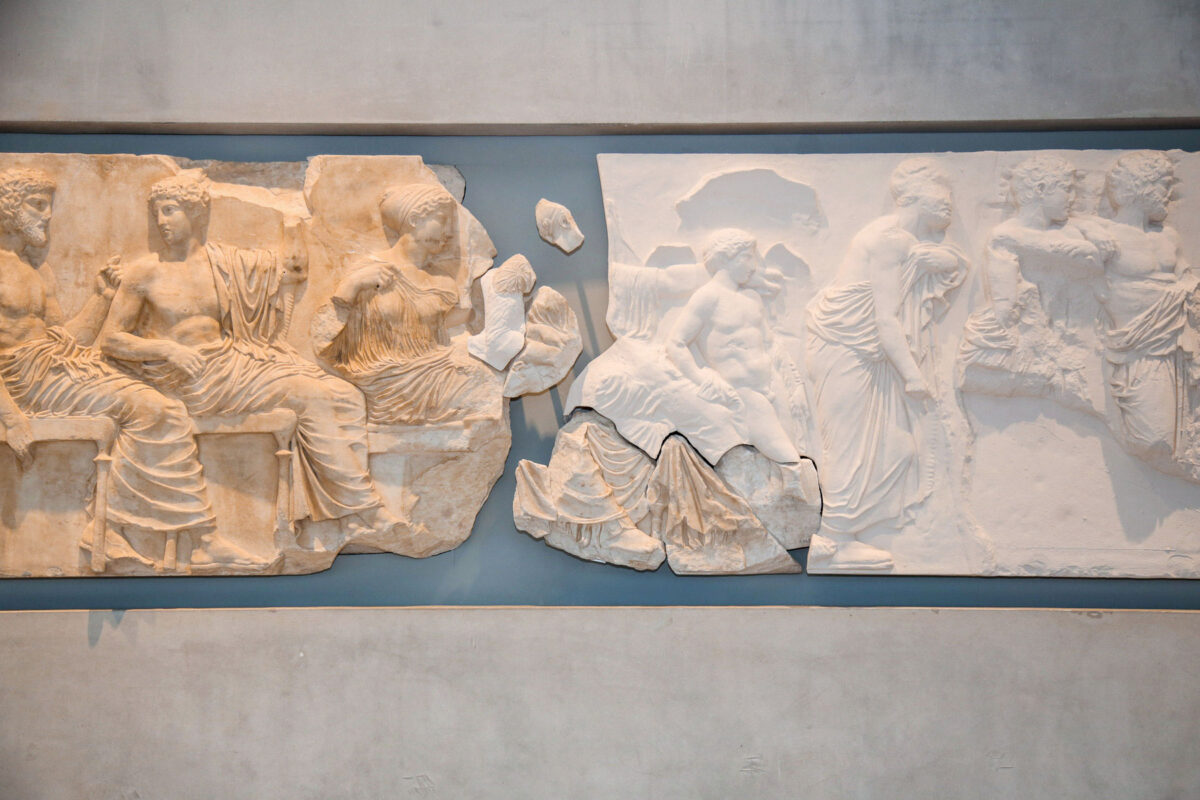 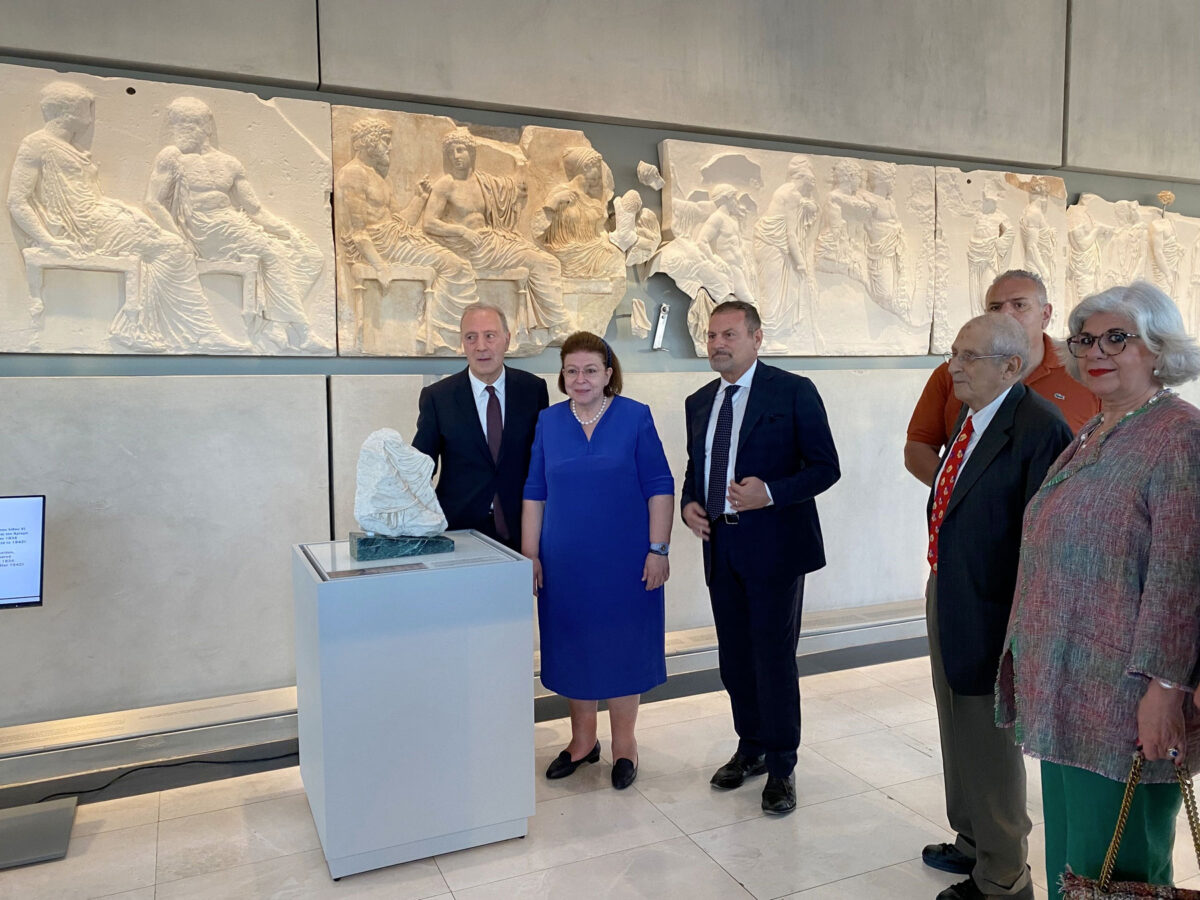 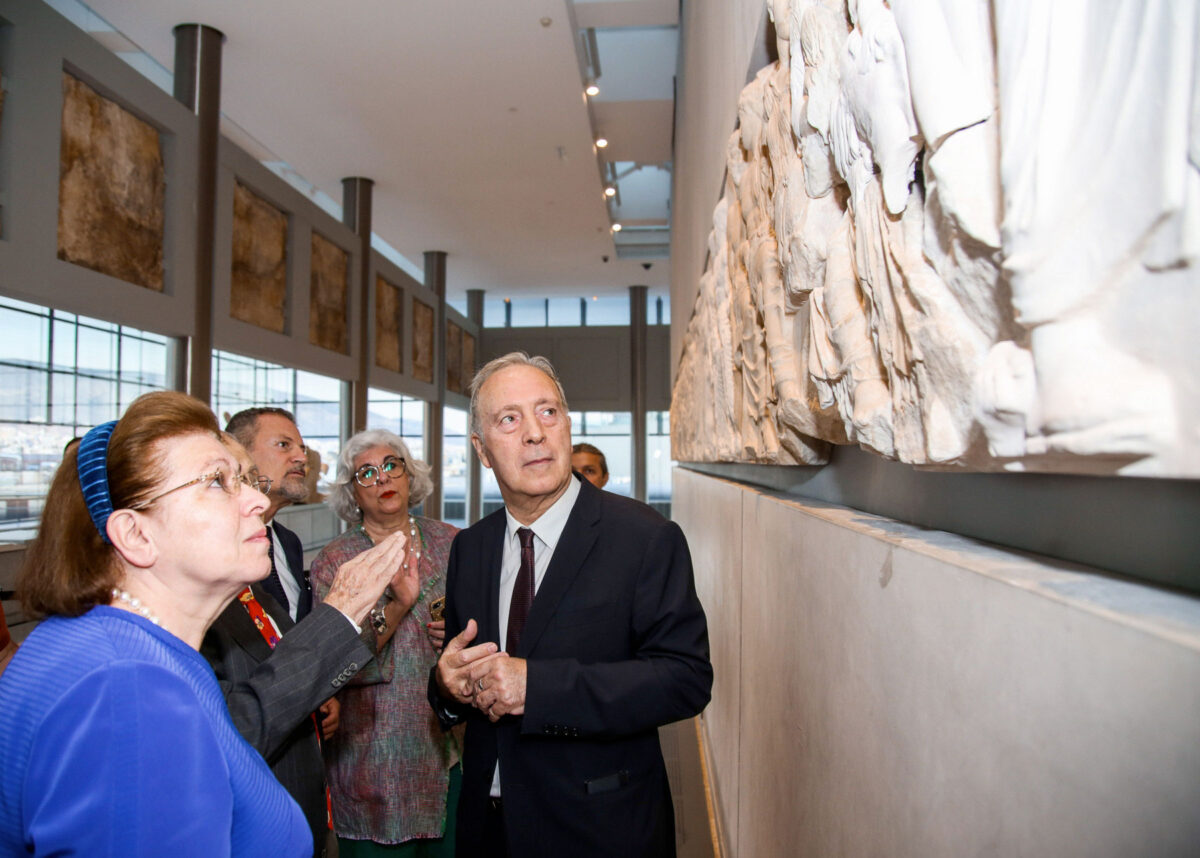 The Fagan fragment permanently restored to the Acropolis Museum

In a simple, particularly touching event, the “Fagan fragment” was permanently restored to the eastern frieze of the Parthenon where it belongs. It is the first repatriation taking place from one state to another. It was made possible by an Agreement resulting from the fruitful dialogue between the Government of Sicily, with the Regional Councilor for Cultural Heritage and Sicilian Identity Alberto Samonà and the Greek Government with Minister L. Mendoni, concluded between the Regional Antonino Salinas  Museum at Palermo with its director Dr. Caterina Greco, and the Museum of the Acropolis at Athens, with its director Professor Nikolaos Stampolidis.

In her greeting, Lina Mendoni said: “Today is the beginning. A beginning of historical significance. Today, an effort is being completed, discussed at times in the past and always ending in an impasse. This effort essentially took concrete form in January 2022. Following many months of friendly consultations, an Agreement was reached between the Autonomous Government of Sicily and the Ministry of Culture and Sports of the Hellenic Republic. The Fagan fragment was ‘deposited’ in the Acropolis Museum for the institutional framework to be regulated by the Ministry of Culture of the Italian Republic, in order to allow the Sculpture’s permanent return to Athens.

“It took less than five months for the historic reunion. The process followed by the  Sicilian Government and the Ministry of Culture of the Italian Republic for the final repatriation of the Fagan fragment to Athens clearly points towards the just way for the return of the Parthenon Sculptures to Athens. The extremely important Decision of the UNESCO Intergovernmental Commission of September 2021, combined with the final return and reunification of the Palermo fragment in Athens, place the moral and legal request of Greece to the Government of the United Kingdom on another basis. And this has been understood by everyone, even  if not admitted to”.

In a message read at the event, Italian Minister of Culture Dario Franceschini said: “Italy is at the forefront of confirming in practice the principle of returning cultural property, with the aim of restoring historical cultural heritage to the places and peoples of its origin. In this case the cultural property was legally in Italy but we wanted to send a strong message of friendship and solidarity to Greece. Our cooperation with Minister Lina Mendoni, whom I greet and thank, will continue intensively in this field, as well as in many others, in which our countries stand together to confirm a positive international agenda on cultural cooperation.”

In a videotaped message, the Assessore for Cultural Heritage and Sicilian Identity, Dr. Alberto Samonà, said: “We were deeply moved, when accompanying in January the fragment of Palermo to Athens, we saw what had previously been a single piece, being  restored to its original work of art.The fact that Sicily wished to follow this path is part of the vision of a new Europe, the one we believe in: a Europe of peoples, culture and identity rooted in its history and millennial traditions.”

The Chairman of the Board of the Acropolis Museum, Professor Dimitris Pantermalis said: “Today is a great day for the Acropolis Museum because this event completes the adventure of a significant section of the eastern frieze of the Parthenon. Years ago, we  had made a small initial step with the return of a section from Heidelberg. Now comes the next big step for the restoration of the Parthenon. I hope that the third will follow, which will be the  biggest.”

The Director General of the Acropolis Museum, Professor Nikos Stampolidis said: “In a world where economic crises, pandemics and wars increase uncertainty and anxiety and the values of Democracy are being challenged, the small piece from Palermo that today is  restored forever to stone VI of the eastern frieze, is in fact a huge piece, a cornerstone in its symbolism “.

The Director of the Museum Antonino Salinas Dr. Caterina Greco noted that “with the deep  conviction that cultural goods removed from their natural place must return to their country of origin, the Region of Sicily, working unanimously and with the Ministry of Culture’s firm support went ahead with the decision to return the fragment to Greece.”

The fragment is part of stone VI of the eastern frieze of the Parthenon, which depicts the gods of Olympus seated, watching the procession and presentation of the peplos to Athena, Patron Goddess and protector of Athens. It depicts the lower extremities of the goddess Artemis, who is looking towards the procession of the Panathenaeans approaching the great temple.

The event took place in the Parthenon Hall, in the presence of the Minister of Culture and Sports Lina Mendoni, Secretary General of Culture George Didaskalou, Director General of Museums of the Italian Ministry of Culture Prof. Massimo Osanna, the Director of the Museum Antonino Salinas Dr. Caterina Greco, Chairman of the Board of the Acropolis Museum Prof. Dimitris Pantermalis and General Director of the Acropolis Museum Prof. Nikos Stampolidis.