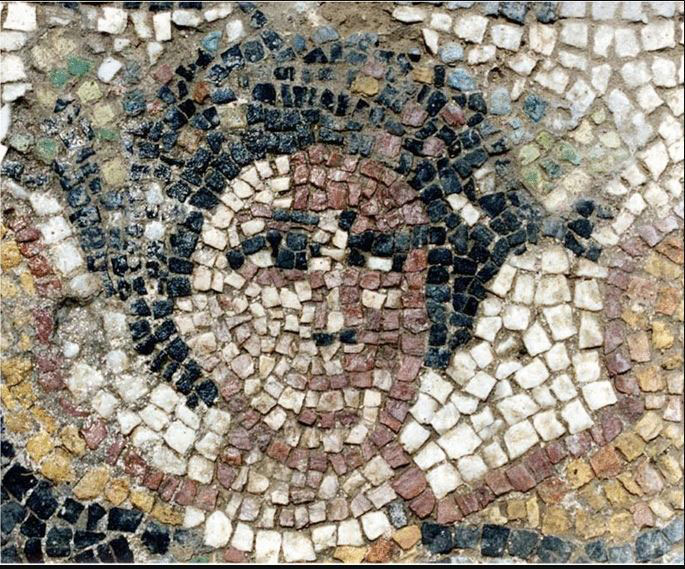 New analysis of mosaics from the House of Charidemos at Halicarnassus

New analysis of nineteen tesserae from mosaics that had been excavated in Bodrum in the late 19th-early 20th c. shed light on the history of Halicarnassus at the end of the Roman period.

An excavation in 1856 by Charles T. Newton and a re-excavation in 1990–93 by a joint Danish-Turkish team revealed several mosaic floors in a late-antique domus from the fifth century CE, now called the House of Charidemos.

Nineteen tesserae from the floor have now been analysed by various archaeometric methods. The results  showed the composition and production of the tiles. Seven tesserae were made of opaque glass, eleven from various rock/lithic materials, while one of them was a ceramic fragment. The results also showed the use of recycled Sb–Mn decoloured glass and two types of red glass.

A comparison with tesserae from other sites in Anatolia from the same period shows similarities in the base glass composition, but also some particularities of the colouring and opacifying agents used for the mosaic of the House of Charidemos.

“The characterisation of the glass, stone, and ceramic tesserae from the House of Charidemos in Halikarnassos shows that a diversity of the materials were used for the production of the mosaics in private contexts during the late Roman–early Byzantine period in Anatolia”, Kaare Lund Rasmussen, Thomas Delbey, Bjarke Jørgensen, Kasper Høegh Jensen, Birte Poulsen & Poul Pedersen condlude. “The comparison of the glass composition with other sites in Anatolia showed similarities in the use of base glass materials. The presence of recycled Sb–Mn decoloured glass and the use of Ca-antimonate and Pb-antimonate are connecting these tesserae to the late Roman tradition. The use of Sb as an opacifying agent shows that this material was still widely used at this period in Halikarnassos and was not yet fully replaced by Sn-rich compounds as it can be seen in the deep red tessera KLR471. The very tight elemental distributions between the samples of similar colours reflecting the same base glass composition could support a hypothesis of secondary workshops specialised in the production of certain colour of tesserae. However, the compositional heterogeneity of elements linked to the colouring process is raising questions about the organisation of the production after the recycling of the glass.

“The re-use of materials, sometimes considered as a characteristic of the late Roman period can be interpreted as a consequence of changes in an economical system less globalised and maybe more turned toward short circuit consumption. The characteristics of the stone materials used in the House of Charidemos do not allow us to assess the provenance of the geological materials used in this context. Further investigations using thin-section petrography and perhaps stable isotope analysis would be beneficial in order to determine the type and the origin of the stone materials used for these samples”.