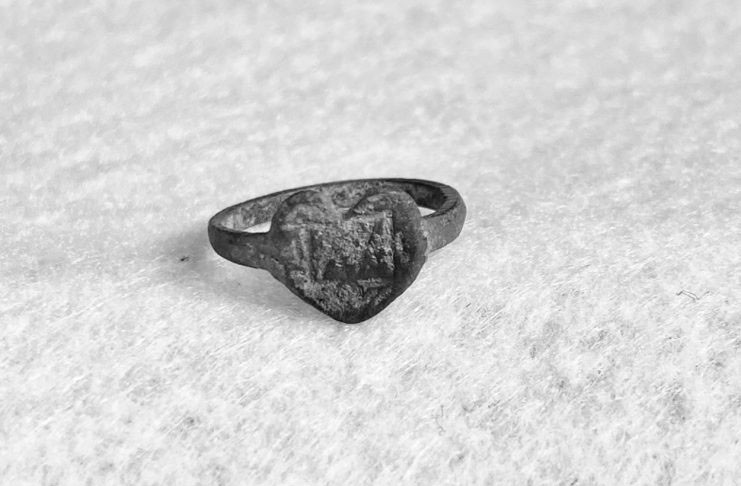 These types of rings are typically made of copper alloy and the bezels can be found in numerous shapes such as round, oval, octagonal, etc (Hulse 1977: 396). Other popular rings, included glass insets made to look like precious stones instead of the bezel. This ring is made out of copper alloy and has a heart-shaped bezel on the band.

In New France, these iconographic “Jesuit” rings were used for trade and were likely an inexpensive form of jewelry. They were decorated with a variety of motifs that had religious and/or sentimental meanings (Mercier 2011). Mercier (2011) examined several “Jesuit” rings and categorized their chronological and geographical distribution across New France based on a technological typology: cast rings, cut and soldered rings, and stamped and soldered rings. She recognized three main phases for the rings use: introductory (1575-1650), peak (1650-1715), and decline phase (1715-1780) (2011: 33). The introductory phase is when rings, specifically the cast rings, were first appearing in the St. Lawrence River Valley (Mercier 2011:34). The peak of the trade rings was shown through the increased volume and varieties available in New France (Mercier 2011:35). For instance, Mercier (2011) recognized that cast rings, cut and soldered rings, and stamped and soldered rings have been recovered archaeologically the peak phase and their distribution extends beyond the St. Lawrence Valley into the western and southern regions of New France. There were several changes in the economy during this time that likely contributed to the peak phase. For instance, the creation of the royal government during the second half of the seventeenth century led to new governing over the colony and increased trade. The number of expeditions also grew, stimulating trade throughout New France. In the early eighteenth century, the use of “Jesuit” rings began to decline slowly, disappearing almost completely in the 1780s (Mercier 35-36).

Overall, “Jesuit” rings have been recovered from seventeenth- and eighteenth-century sites like Fort St. Joseph throughout New France. They appear to have been used during both the French and British occupation, with a higher concentration during the French period (Stone 1974: 131). All three of the iconographic ring technological types (cast rings, cut and soldered rings, and stamped and soldered rings) are present in our Fort St. Joseph collection. Some have been recovered archaeologically at the site, while others were donated in the early twentieth century. Examples of each type can be found on display at the Niles History Center for those who have a chance to visit.