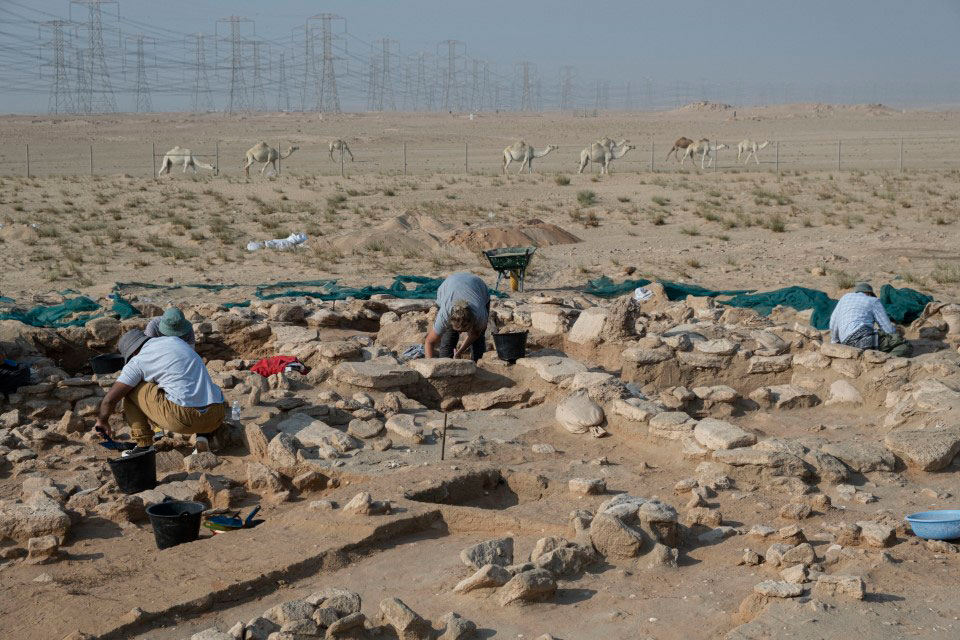 After a break caused by the Covid-19 pandemic, the Kuwaiti-Polish Archaeological Mission (KPAM) resumed work in the Al-Subiyah desert in Northern Kuwait. The team excavates the prehistoric site of Bahra 1 which dates from the Ubaid period in the mid-6th millennium BCE.

“We are very happy to be back in Kuwait and able to resume the work interrupted after the 2019 season”, said Prof. Bieliński, the director of the Polish side of the KPAM as he presented the results of this season’s work at Bahra 1 during a meeting at the Polish Embassy in Kuwait.

The meeting was hosted by His Excellency Paweł Lechowicz, the Ambassador of Poland in the State of Kuwait, and attended by His Excellency Oleksandr Balanutsa, the Ambassador of Ukraine in the State of Kuwait, representatives of the Department of Archaeology of the Kuwait National Museum, including Dr. Sultan Ad-Duwaish, the Director of Archaeology at the Kuwait National Museum and co-director of the KPAM, and Kuwaiti media.

Bahra 1, discovered by Dr. Ad-Duweish, is a large settlement that features cultural elements from both the Arabian Neolithic tradition and the Chalcolithic Ubaid culture that developed in Southern Mesopotamia. It is the largest settlement from this period known from the Arabian Peninsula. The KPAM – a cooperation between the National Council of Culture Arts and Letters of the State of Kuwait (NCCAL) and the Polish Centre of Mediterranean Archaeology, University of Warsaw (PCMA UW) has been excavating the site since 2009, with a gap caused by the pandemic.

Bahra 1 has already yielded many discoveries unprecedented in this period. Among them is a fragment of a copper pin – an extremely rare find even in Southern Mesopotamia, and an exceptional one in the Arabian Peninsula (now on display in the Kuwait National Museum).

The site also produced the largest collection of pottery from the Ubaid period at any site in the Arabian Peninsula. About half of the almost 20,000 pieces belong to the Ubaid Ware (vessels imported from Mesopotamia); the other half is made up of Coarse Red Ware, a utilitarian type of pottery believed to be made in the Arabian Peninsula. Quite uniquely, this collection includes a pot of unfired clay. “This is of great importance because it provides us with proof that such vessels were actually made here, in the Al-Subiyah”, said Prof. Bieliński, adding “This is a vital piece of information, as no such evidence has ever been reported from other sites with this type of pottery“.

This year, a fragment of a pottery model of a boat was found. Such models are typical for Ubaid-period sites (one had been found in the Al-Subiyah at the site of H3 by a British team). Their popularity proves the importance of maritime contacts in this period.

Among outstanding discoveries at Bahra 1 is a special building interpreted by Prof. Bieliński, as a possible temple – the first of its kind in the region. “This year, we excavated an area just behind this presumed temple to find out how it functioned within the settlement”, explains the archaeologist. “We also continue to research a nearby long-lived building complex, with a complicated history and several building phases”, he adds.

In one of its rooms, a small but unparalleled find was made this year: a fragment of a stone pendant showing a bird of prey with outstretched wings. “Depictions of such birds are known from Ubaid seals from Northern Mesopotamia. But this is something different. It is the first amulet found in excavations. It would not be out of place in a later period but here, in the 6th millennium BCE such an object is quite surprising“, says Bieliński.

Apart from regular excavation work, the KPAM also offers training opportunities for junior archaeologists from the NCCAL. They participate in regular fieldwork, gaining experience in exploring a prehistoric site, and take part in workshops on finds processing and documentation.