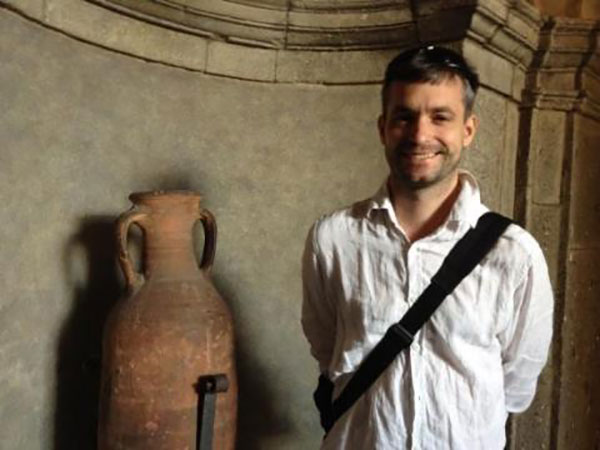 Colleagues will be saddened to learn that Ross Iain Thomas passed away unexpectedly on 14 November 2022 following surgery.

Ross was a stalwart archaeologist specialising in ancient maritime networks and technologies, with a BA from Durham University and a PhD from the University of Southampton. A leading specialist in Roman Eastern Mediterranean and Red Sea port communities, he also published widely on the Hellenistic and Nubian worlds, having undertaken fieldwork on land in the UK, Jordan, Egypt, Sudan and the UAE, and under water in Israel and Egypt. He led fieldwork at several sites, including as Co-Director of the Red Sea Wrecks Survey (2010-2011) and Director of the British Museum Naukratis Fieldwork Project (2012-present).

Ross joined the Museum in 2011 as a Project Curator on the Naukratis Project, before becoming a Curator of Roman Collections in 2016. He was committed to public and professional service. Ross was a keen supporter of students, especially those from less privileged backgrounds, organising annual Museum placements. He also served on the boards of several grant-giving bodies and as a trustee of the Palestine Exploration Fund, the Roman Society and, most recently, the Brading Roman Villa, on the Isle of Wight, a site perched above the family home where he grew up, and which was an inspiration for his future career. He was hugely talented and widely respected.

He was just 44 years old and is survived by his two children, 7 and 4, his wife, parents and brother. He will be greatly missed by his family, friends and colleagues.

Further information on memorial arrangements and the family’s wishes concerning contact will be made available when possible.