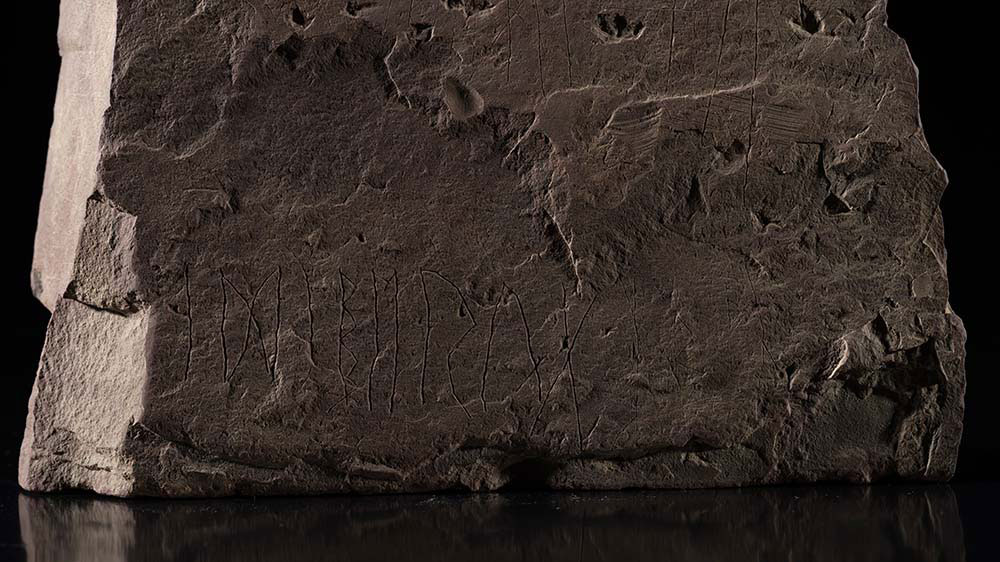 An ancient Norwegian rune stone is attracting international attention among runic scholars and archaeologists. The inscriptions are up to 2,000 years old and date back to the earliest days of the enigmatic history of runic writing.

During the first few centuries of the Common Era, during the period that archaeologists call the Roman Iron Age, Scandinavians came into contact with Roman society by trading goods and through their encounters with the Roman army. Archaeological material testifies to the fact that this is how they acquired knowledge about new customs and forms of organisation, and not least a written culture.

Inspired by the classical alphabets, such as the Roman alphabet, the Germanic peoples created their own characters – runes. But exactly how old is the runic alphabet, and when were the first rune stones made? These are questions that researchers have been seeking to answer for many years.

A new archaeological find is attracting international attention among runic scholars and archaeologists: the world’s oldest dated rune stone was discovered during the autumn of 2021 when archaeologists at the Museum of Cultural History, University of Oslo, investigated a grave field in Hole near Tyrifjorden, Eastern Norway. Radiocarbon dates show that the age of the grave and thus the inscriptions on the stone probably date back to 1-250 CE. This rune stone is thus one of the very earliest examples of words recorded in writing in Scandinavia, and the inscriptions provide new insights into the development and use of runic writing during the early Iron Age.

The dream of all runologists

Sometime between 1800 and 2000 years ago, someone stood near Tyrifjorden and carved runes into the 31×32 cm block of reddish-brown Ringerike sandstone. They spoke an early form of the ancient Nordic language that is the ancestor language of modern Nordic languages spoken in Scandinavia today.

“Having such a runic find fall into our lap is a unique experience and the dream of all runologists. For me, this is a highlight, because it is a unique find that differs from other preserved rune stones,” says runologist Kristel Zilmer, Professor of Written Culture and Iconography at the Museum of Cultural History, University of Oslo.

Over the past year, she has worked extensively on investigating and interpreting the inscriptions on the rune stone, while archaeologists at the Museum of Cultural History have simultaneously been working on dating the grave and analysing other finds from the grave field.

The stone is named after the site and is now being called Svingerudsteinen (the Svingerud Stone).

Is the name inscribed on the stone that of the person who is buried there? On the front face of the stone there are eight runes that stand out more clearly than the other inscriptions. Converted into Roman letters they spell: idiberug.

The ways of writing older inscriptions varied considerably and the language changed a lot between the time when these runes were carved and the Viking Age and the Middle Ages. Interpreting the messages on the stone is therefore a challenge.

“The text possibly refers to a woman called Idibera and the inscription could mean “For Idibera”. Other possibilities are that idiberug is the rendering of a name such as Idibergu/Idiberga, or perhaps the kin name Idiberung,” says Professor Zilmer.

The runic alphabet is called the futhark, because the first six runes are “f u th a r k”. The first three runes of the alphabet can be found in one place on the stone ᚠ (f), ᚢ (u) and ᚦ (th).

“The stone has several kinds of inscriptions. Some lines form a grid pattern and there are small zigzag figures and other interesting features. Not all inscriptions have a linguistic meaning. It’s possible that someone has imitated, explored or played with the writing. Maybe someone was learning how to carve runes,” says Professor Zilmer.

There is still a lot of research to be done, but Professor Zilmer is certain that they will obtain a lot more valuable knowledge in the future about the early history of runic writing and the custom of making rune stones.

The Museum of Cultural History’s excavation of the grave field is part of a cultural resource management project carried out in advance of Nye Veier AS’, the Norwegian Ministry of Transport’s construction organisation, planned building of a new highway and railway, the Ringerike portfolio, between Sandvika and Hønefoss.

This region is known as a rich historical district with several monumental archaeological finds, e.g. the Gjermundbu Viking helmet. In one of the cremation pits at the site, the archaeologists found a stone slab with runic writing. The grave containing the rune-stone was found 40-50 cm underneath a younger grave mound. The grave also contained cremated human bones from an adult individual as well as grave goods.

Cremation pits are a simple grave type with little or no visible demarcation above ground. It consists of remains from the cremation pyre, such as charcoal, cremated human bones, and sometimes grave goods, dug into a pit in the ground. The cremated bones are often put in a container but can also be found scattered in the grave fill. This is a common funerary practice from the late Bronze Age to the Roman Iron Age.

See the world’s oldest rune stone at the Historical Museum

Get a closer look at the stone with rune inscriptions dating back to the earliest days of the enigmatic history of runic writing. The exhibition is open from 21 January to 26 February.

Read about the exhibition “The world’s oldest rune stone”

The history of runic writing

Runes are the oldest known form of writing in Norway. We know that runes were in continuous use from around the beginning of Common Era and throughout the Viking Age until  the late Middle Ages. When the Viking Age came to an end 1,000 years ago, inscribing runes was still a common practice throughout Scandinavia.

Scandinavia has several thousand stones with runic inscriptions from the Viking Age, but there is less evidence of runes from earlier times. In total, only about 30 rune stones have been found in Norway that are believed to date back to the Roman Iron Age and the Migration Period (up until around 550 CE). Svingerudsteinen is the only stone that is retrieved from an archaeological context, dating back to before 300 CE. This new find is making researchers wonder if any other rune stones might also be older than previously thought.