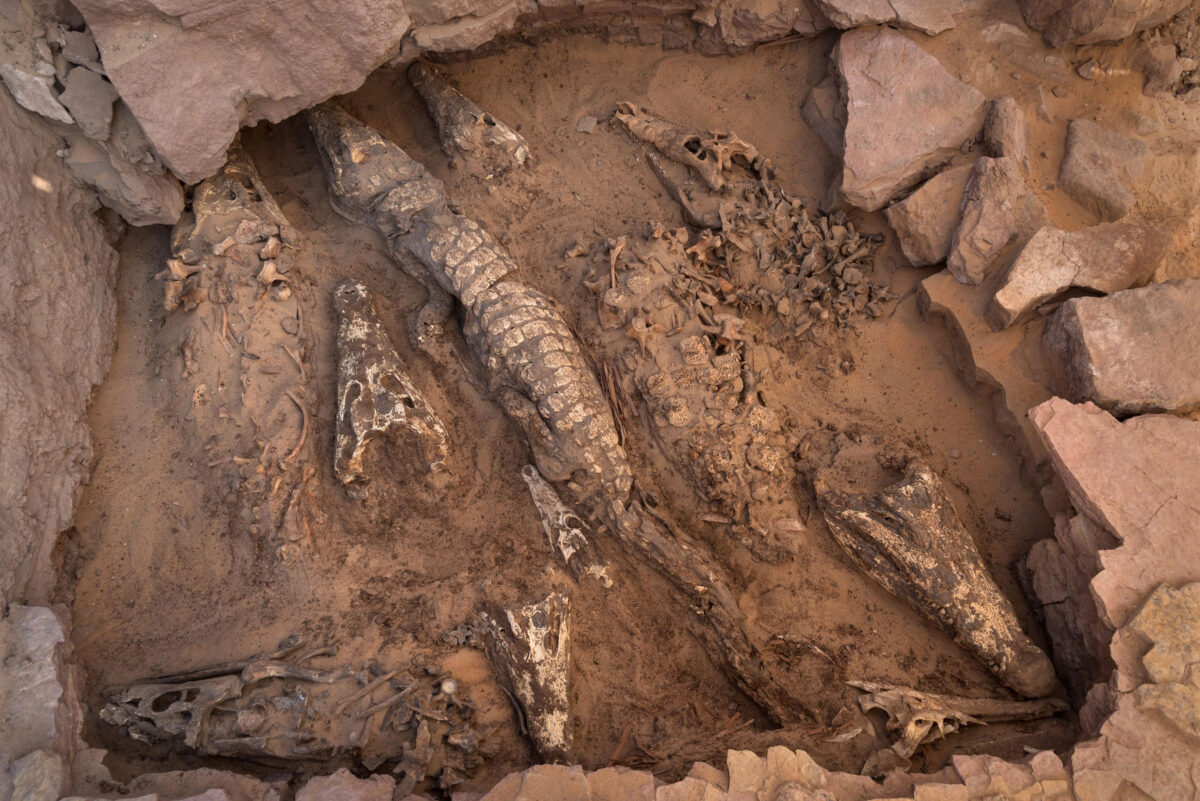 Archaeologists from the Royal Belgian Institute of Natural Sciences studied them

In 2019, archaeologists from the University of Jaén uncovered a tomb containing crocodile mummies in Qubbat al-Hawā, a site near the city of Aswan in southern Egypt. The small rock cut tomb contained five skeletons and five skulls of large crocodiles. It lies next to six other tombs in which dignitaries of the region were buried. They all date from the pre-ptolemaic era, before 304 BC.

The crocodiles may have been used during rituals for the Egyptian god Sobek, the god of water and fertility, often depicted with a crocodile head. Kom Ombo, just 50 kilometres away, was an important centre for crocodile worship.

‘More than 20 burial sites with crocodile mummies are known in Egypt, but to find 10 well-preserved crocodile mummies together in an undisturbed tomb is extraordinary,’ says Bea De Cupere. ‘Of most mummies collected by museums in the late 19th and early 20th centuries, often hatchlings, we don’t know exactly where they come from.’

The archaeologists at Qubbat al-Hawā found traces of linen, palm leaves and rope, associated with some of the crocodiles, indicating that they had once been wrapped. However, the linen bandages must have rotted away, and the crocodiles weren’t covered with large amounts of pitch or bitumen, which was common in more recent periods. A happy coincidence, as this allowed the researchers to measure and study these specimens thoroughly.

The smallest crocodile is 1.8 metres long, the largest 3.5 metres. They belong to two different species: the Nile crocodile and the West African crocodile. Remarkably, three skeletons were almost complete, with the other two missing quite a few parts. ‘The crocodiles were first buried elsewhere, possibly in sand pits,’ says De Cupere. ‘This allowed the crocodiles to dry out naturally. Then the remains were unearthed, wrapped and moved to the tomb in Qubbat al-Hawā. Body parts must have been lost during wrapping and transport.’   How did the Egyptians catch these crocodiles? We know from iconography that crocodiles were caught mainly with nets. No slaughter marks have been found on the crocodiles from Qubbat al-Hawā. Possibly the crocodiles were drowned, suffocated or overheated by exposing them to the sun for long periods of time.

‘I’m thrilled that finds like these give us another glimpse into the life of ancient Egyptians’, says De Cupere. The study appeared in the scientific journal PLOS ONE.