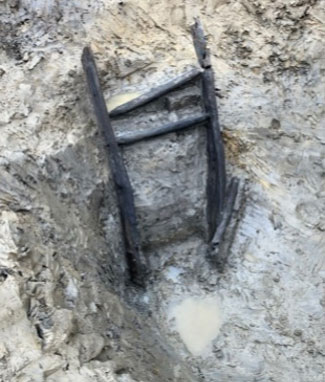 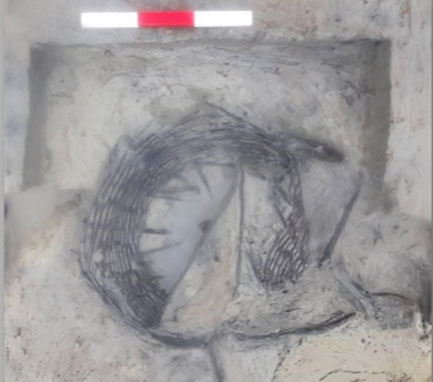 It is incredibly rare for archaeologists to find wood when they are excavating a site, especially wood which is over 2000 years old. But the excavations of MOLA archaeologists on the National Highways proposed A428 Black Cat to Caxton Gibbet improvements have thrown up a few surprise…

People in the past would have used a lot of wood, especially in buildings like roundhouses, which were the main type of structures people lived in during the Iron Age (800BC – 43AD). Usually, the only evidence we find of the roundhouse buildings are post holes, where the wooden posts have already rotted away. This is because wood breaks down very quickly when buried in the ground.

In fact, across England, less than 5% of archaeological sites have any wood remaining! Archaeologists excavate new sites across the country every day – this gives you an idea of what a rare find it is! So, archaeologists were very lucky to find some whilst excavating on the A428.

Wood is broken down by fungi and micro-organisms such as bacteria. But, if the wood is in very wet ground, it can take in water and become waterlogged. When wood is full of water and buried in wet ground, it doesn’t dry out. This means that oxygen can’t get to the wood. The bacteria can’t survive without oxygen, so there is nothing to help the wood decompose.

Part of the excavation area is a shallow valley where groundwater still gathers naturally. Basically, this means the ground is always wet and boggy. It would have been the same during the Iron Age, when the local community used this area for gathering water from shallow wells. Although this meant excavating was very muddy work for the archaeologists, it also led to some remarkable discoveries.

The incredible wooden objects found were preserved in the boggy ground for 2000 years:

-Iron Age ladder. This was used by the local community to reach water from the shallow well.

-Wattle panel. It may look like a basket, but it isn’t. It is actually a wattle panels (woven twigs and branches) covered with daub, which was made out of materials such as mud, crushed stone and straw or animal hair. This panel was used to line the waterhole, but wattle and daub was also used to build houses for thousands of years. It is incredibly rare to find some preserved from as long ago as the Iron Age.

-Reconstructed roundhouse. A similar weaved pattern, as well as walls covered in daub, can be seen in the photograph of a reconstructed Roundhouse.

After discovering preserved wood, archaeologists must act quickly. The most important thing is that the wood is kept wet until it can be carefully dried out in a lab by expert conservators. If it isn’t kept wet, then it will begin to decompose very quickly, and can completely disintegrate!

What can we learn from the wood?

We can learn a lot from these wooden objects. As well as being able to see how people made and used them during their daily lives, finding out what type of wood they used will tell us about the trees which grew in the area. This can help us reconstruct how the landscape would have looked at the time, and how that landscape changed throughout history.