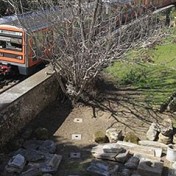 Archaeologists, citizens, NGOs and neopagans in court against the chief Greek state railway company over the fate of the 12 God’s Altar.

The ancient monument, revealed during construction work on the main urban railway line, was recently the site of minor conflict between state authorities aiming to cover it and citizens – among them polytheists and modern pagans – asking for its safety and promotion. Once in the center of ancient Athens, the Altar now stands very close to the railway that serves 90 thousand people on a daily basis. Any intention for conservation and promotion would mean a long-term closure of the line which could cause additional problems to modern Athenians. As the disagreement between the State and citizens reached the court, the Altar’s fate is changing. While a first decision ruled for the monument’s temporary burial, a second one postponed the project’s materialization. After the second rule, the State Urban Railway Company asked for a reconsideration, which was finally accepted. However, NGOs and pagans have already taken the case to the European Court for Human Rights in Strasbourg filing the Greek State for acting against private life, environment protection and religious freedom.

Seems the story has many layers…