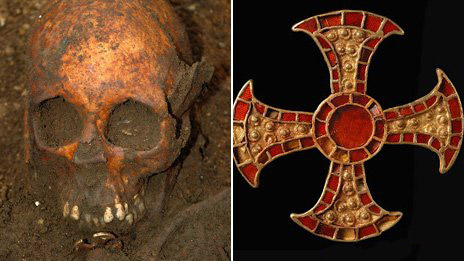 An Anglo-Saxon grave discovered near Cambridge could be one of the earliest examples of Christianity taking over from Paganism, archaeologists said.

The skeleton of a teenage girl was found buried on a wooden bed, with a gold and garnet cross on her chest.

The grave is thought to date from the mid-7th Century AD, when Christianity was beginning to be introduced to the Pagan Anglo-Saxon kings.

It was uncovered at Trumpington Meadows by Cambridge Archaeological Unit.

The cross is only the fifth to be discovered in the UK.

Only 12 other “bed burials” have been found.

However, Alison Dickens, who led the excavation, said the combination of a bed burial – where the body was placed in a wooden frame held together by metal brackets – and a Christian symbol, was “extremely rare”.

“We believe there has only been one other instance of a bed burial and pectoral cross together, at Ixworth in Suffolk,” she said.

The grave of the teenager, who was believed to be about 16 years-old, was one of a cluster of four uncovered at the site south of Cambridge.

The three others were described as more typical Anglo-Saxon burials with no indications of Christianity.

The 3.5cm (1.4in) cross found on the girl’s chest had probably been sewn onto her clothing.

Other artefacts, including a bag of precious and semi-precious stones, and a small knife were also found with the body.

Archaeologists said the craftsmanship of the cross was comparable to the royal Anglo-Saxon hoard discovered at Sutton Hoo, in Suffolk.

Dr Sam Lucy, a specialist in Anglo-Saxon burial from Newnham College, Cambridge, said the method of burial and quality of the jewellery could indicate the girl was from a noble or royal family.

“Christian conversion began at the top and percolated down,” she said.

“This cross is the kind of material culture that was in circulation at the highest sphere of society.”

She said the idea of burying a body with “grave goods” for the afterlife was “counter to the Christian belief of soul and not body continuing after death”.

However, she believed the merging of burial rites showed the grave was “right on the cusp of the shift from Pagan to Christian”.

Scientists from Cambridge Archaeological Unit now plan to analyse the skeletons and artefacts.

They hope to determine whether there was any relationship between the Christian girl and the three other skeletons found in close proximity to her.