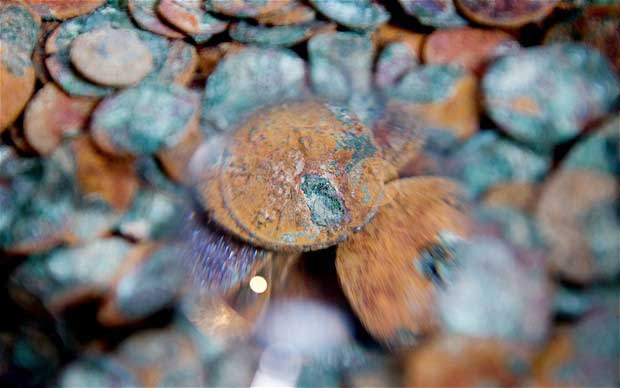 Largest treasure from a Roman settlement in England

One of the largest hoards of Roman coins discovered in Britain has been uncovered during an archaeological dig in Bath, experts have said.

More than 30,000 silver coins have been found by archaeologists working at the site of a new city-centre hotel.

The hoard, believed to date from the third-century, was unearthed about 450 feet from the historic Roman Baths.

Experts believe the “treasure trove” is the fifth largest hoard ever discovered in Britain and the largest from a Roman settlement.

The coins, which have now been sent to the British Museum for further analysis, are fused together in a large block.

This makes identification and counting difficult and conservators at central London Museum expect the task of analysing the coins to take up to 12 months.

A campaign has now been started at the Roman Baths to try to raise £150,000 to acquire and display them.

Roman Baths spokesman Stephen Clews said: “We’ve put in a request for a formal valuation and then hope to buy the coins to display them at the baths. (…) At the time there was a lot of unrest in the Roman Empire so there may be some explanation for why the coins were hidden away. (…) The find is also unusual as it was discovered by professional archaeologists as opposed to an amateur using a metal detector.”