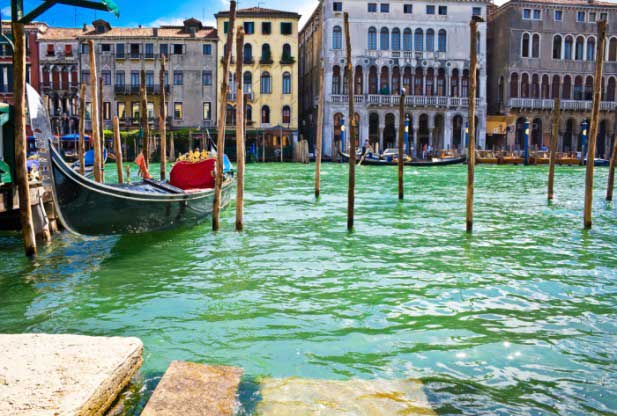 Venice hasn’t stopped sinking after all

The water flowing through Venice’s famous canals laps at buildings a little higher every year — and not only because of a rising sea level. Although previous studies had found that Venice has stabilized, new measurements indicate that the historic city continues to slowly sink, and even to tilt slightly to the east.

“Venice appears to be continuing to subside, at a rate of about 2 millimeters (.07 inches) a year,” said Yehuda Bock, a research geodesist with Scripps Institution of Oceanography at UC San Diego, and the lead author of the new research paper on the city’s downward drift. “It’s a small effect, but it’s important,” he added. Given that sea level is rising in the Venetian lagoon, also at 2 millimeters per year, the slight subsidence doubles the rate at which the heights of surrounding waters are increasing relative to the elevation of the city, he noted. In the next 20 years, if Venice and its immediate surroundings subsided steadily at the current rate, researchers would expect the land to sink up to 80 millimeters (3.2 inches) in that period of time, relative to the sea.

Bock worked with colleagues from the University of Miami in Florida and Italy’s Tele-Rilevamento Europa, a company that measures ground deformation, to analyze data collected by GPS and space-borne radar (InSAR) instruments regarding Venice and its lagoon. The GPS measurements provide absolute elevations, while the InSAR data are used to calculate elevations relative to other points. By combining the two datasets from the decade between 2000 and 2010, Bock and his colleagues found that the city of Venice was subsiding on average of 1 to 2 millimeters a year (0.04 to 0.08 inches per year). The patches of land in Venice’s lagoon (117 islands in all) are also sinking, they found, with northern sections of the lagoon dropping at a rate of 2 to 3 millimeters (0.08 to 0.12 inches) per year, and the southern lagoon subsiding at 3 to 4 millimeters (0.12 to 0.16 inches) per year.

The findings will be published March 28 in Geochemistry, Geophysics, Geosystems, a journal of the American Geophysical Union.

“Our combined GPS and InSAR analysis clearly captured the movements over the last decade that neither GPS nor InSAR could sense alone” said Shimon Wdowinski, associate research professor of Marine Geology and Geophysics at the University of Miami.

In the new study, using the GPS instruments, Bock and his colleagues were able to take absolute readings of the city and its surrounding lagoons. And not only did they find the sinking, but they found that the area was tilting a bit, about a millimeter or two eastward per year. That means the western part — where the city of Venice is — is higher than the eastern sections. Prior satellite analyses didn’t pick up on the tilt, Bock said, possibly because the scientists had been taking measurements using InSAR, which only provided the change elevation relative to other sites.

The relative nature of InSAR measurements might also explain why the new study detected Venice’s subsidence, while other recent studies did not, Bock conjectured.

Venice’s subsidence was recognized as a major issue decades ago, he noted, when scientists realized that pumping groundwater from beneath the city, combined with the ground’s compaction from centuries of building, was causing the city to settle. But officials put a stop to the groundwater pumping, and subsequent studies in the 2000s indicated that the subsidence had stopped, he said.

“It’s possible that it was stable in that decade, and started subsiding since then, but this is unlikely,” Bock said. The current subsidence is due to natural causes, which probably have been affecting the area for a long time.

A significant part of those natural causes are plate tectonics. The Adriatic plate, which includes Venice, subducts beneath the Apennines Mountains and causes the city and its environs to drop slightly in elevation. And although the groundwater pumping has stopped, the compaction of the sediments beneath Venice remains a factor.

The frequency of floods in Venice is increasing, Bock said, and now about four or five times a year residents have to walk on wooden planks to stay above the floodwaters in large parts of the city. A multi-billion-dollar effort to install flood-protection walls that can be raised to block incoming tides is nearing completion, he said. The adjustable barriers were designed to protect the city from tides that are coming in higher as overall sea levels are rising in response to climate change.

To ensure that the gates can hold back sufficient tidal water in the long run, their builders “have to take into account not only the rising of sea level, but also the subsidence,” Wdowinski said. The land on which those gates are being built is descending and taking the barriers down with it relative to the rising seas, he said, effectively doubling the amount of elevation change in store for Venice.

The patchy land in the surrounding lagoon could need shoring up as well. Over the next 40 years, the natural barriers that protect the Venice lagoon and city could drop by 150-200 millimeters, Wdowinski said, so officials may need to reinforce those sinking sediments as well.