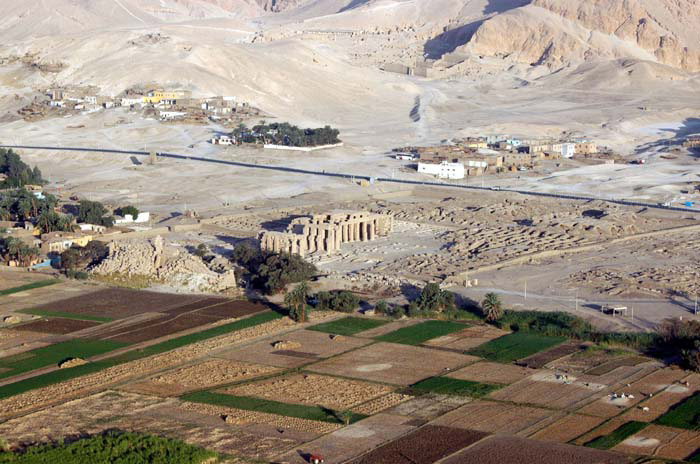 Searching for the Venice of the Nile

Looking for ancient channels around the Nile.

I’M KNEELING in a narrow strip of green fields that separates the Nile river from Egypt’s western desert, watching Angus Graham and his team hammer what look like huge metal tent pegs into the ground. A few fields away, the ruined columns of the Ramesseum, mortuary temple of Pharaoh Ramesses II, rise above the wheat, overlooked by the amber cliffs that hide the royal tombs of the Valley of the Kings.

This area is dotted with some of the world’s most impressive ancient remains, including the awesome Colossi of Memnon (pictured). But Graham, a field director for the Egypt Exploration Society in London, is interested in what’s still hidden underground.

His tent pegs are actually probes that send weak electrical pulses into the ground to measure the earth’s resistance. Called electrical resistivity tomography, the method can distinguish between bedrock (very resistant), waterlogged sediments (low resistance) and archaeological deposits (somewhere in between).

The hope is that by repeating the measurements throughout the Luxor area the team will see how Egypt’s pharaohs engineered this landscape on a breathtaking scale, turning their capital, Thebes, into an ancient Venice.

Together with British, Egyptian and French colleagues, Graham is looking for ancient water channels. Texts and pictures from nearby temples and tombs suggest that sites on both sides of the Nile were connected by canals and navigable by boat. Descriptions of the Beautiful Festival of the Valley, for example, state that statues of gods were taken by barge from the temple complex at Karnak on the east bank to visit the dead kings at their mortuary temples on the west bank.

These descriptions have never been tested, and Graham wants hard evidence. If the waterways existed, did they operate all year round or just during flood season? Were they also used to transport supplies, including the immense stones used to build the temples?

His previous work at Karnak has already changed ideas about the layout of the Nile’s east bank. It had been assumed that the temple was always on the riverbank, as it is now, but with Judith Bunbury of the University of Cambridge, Graham has found that the Nile shifted course over the centuries. The temple was originally on an island in the river, which would have been submerged each year as the Nile flooded.

Scholars knew that Karnak symbolised the ancient Egyptians’ view of how the world was created – as a “primeval mound” emerging from infinite waters – but the finding suggests that Karnak demonstrated this physically.

Kent Weeks, director of the Theban Mapping Project in the Valley of the Kings, describes Graham’s work as “one of the most important and forward-looking projects in Egypt today”, because instead of focusing on one site at a time, it is making sense of the landscape as a whole.

The Karnak discovery could transform our understanding of ancient Egyptian religion and its role in Egyptian society, says Weeks, who thinks Graham’s work on the west bank will be just as revolutionary. Locating the canals that connected the mortuary temples with the Nile and Karnak should also show archaeologists where to look for key sites, such as landing stages. “This is setting the plan for the next generation of archaeology,” he says.

Back in the wheat field, the probes are finally in position and it’s time for lunch. Egypt’s political future is still uncertain, but as we eat our flatbread and bean foul, the group tells me that life is now effectively back to normal for archaeologists. “Everyone’s back,” says Graham, including a US team working at Amenhotep III’s palace, Malkata, a German team at the Colossi of Memnon, and French researchers across the river at Karnak.

Things didn’t go so smoothly when Graham arrived in Egypt to begin the project in January 2011: some of his equipment was impounded, then the political protests started. In the chaos of revolution, looters targeted archaeological sites. Graham and his colleagues had no choice but to fly home. This year, things have gone rather better. A few weeks after the final round of Egypt’s parliamentary elections, Luxor is peaceful.