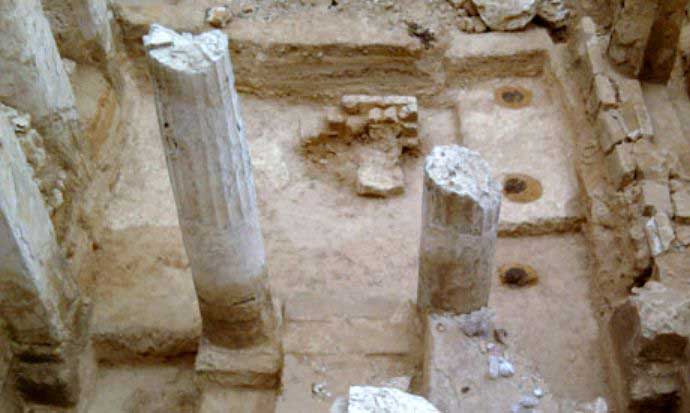 Four tombs excavated in eastern necropolis of the city

The site was discovered during excavations carried out by the Ministry of State for Antiquities (MSA) and stretches between the areas of Al-Shatbi and Mostafa Kamel.

MSA minister Mohamed Ibrahim stated that the aim of the excavations was to inspect the area for archaeological artefacts before declaring it free for residential building.

“It is a very important discovery that adds more detail to the archaeological map of Alexandria,” Ibrahim told Ahram Online.

A finely decorated clay container from the second century BC was among the discoveries, he added.

Director general of Alexandria antiquities, Mohamed Mostafa, explained that the most important tomb is one dating from the Greco-Roman era which include an open courtyard with two rocky cylindrical columns in the middle.

A decorated ‘Hidra’ container –a large pot filled with burned human remains– was also unearthed along with a tombstone bearing the deceased’s name.

The second tomb has eight rock-hewn steps and is located under a modern building; the third and fourth ones are found on a deeper level and house a collection of clay lamps and pots of different sizes and shapes.

Within the debris, said Mostafa, archaeologists discovered a small burial site for a woman and her son dating from the late Roman period.

Following the discovery, the area will now be declared a protected archaeological site and all construction work prohibited.