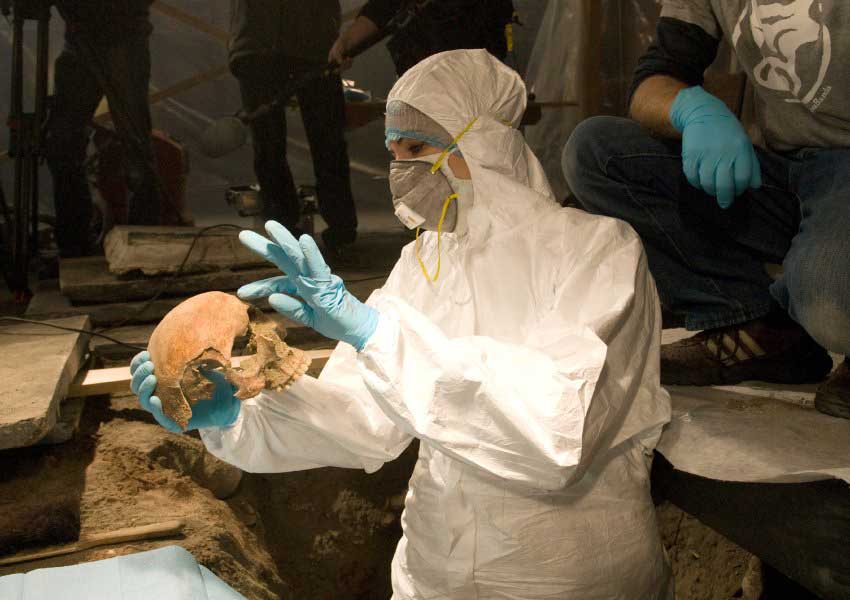 Life and Death of Notorious Preacher

Archaeologists have reopened his grave in Switzerland

Archaeologists have reopened a grave in Switzerland to see if DNA testing can confirm it contains the body of 17th century Swiss hero -and killer- Georg Jenatsch.

Jenatsch is believed to be buried under the flagstones of Chur Cathedral in eastern Switzerland. A body purporting to be his was already exhumed in 1959 by the anthropologist Erik Hug, who identified him on the basis of the clothing and the large blow to the skull.

Now the archaeologists have dug him out again, with a view to identifying him once and for all with new techniques. They are also studying his skull with the aid of a scanner at the local hospital, hoping to reconstruct his face and compare it with contemporary portraits of the notorious Jenatsch.

Who was this man? In the Thirty Years’ War, Graubünden, today a Swiss canton, was an independent republic, and a cockpit for Catholic and Protestant powers seeking to dominate Europe.

Enter Georg Jenatsch. He was a Protestant preacher, a handy swordsman, and a leader of fighting men. In one bloody exploit, he led a band of men at night to the castle of Pompeius Planta, a nobleman who was the leader of the pro-Austrian party. According to one story, Planta, realising what was in store, hid up a chimney but was betrayed by the curious behaviour of his dog. He was dragged down by the assassins and murdered on the spot. Jenatsch himself finished him off with an axe.

Later, Jenatsch abruptly changed sides, allied himself with the Catholic powers and converted to Catholicism. This was an unforgivable sin to some of his former comrades in arms. One night during Carnival in 1639, at an inn in Chur, he was surrounded by masked men led by an assassin dressed as a bear who fired a gun at him while others dispatched him with axes. The bloody corpse is said to have been buried hurriedly in Chur Cathedral a day later.

Archaeologist Manuel Janosa, who is leading the renewed investigation of the body, says: “I got interested in the idea of a DNA study when I found that there were shreds of material from his clothing where you could see bloodstains.”

“I also found that there are descendants of the Jenatsch family still living, and they were prepared to volunteer their DNA for a match. But when we discovered that the bloodstains on the clothing were not enough to provide a DNA profile, I asked the Bishop of Chur if I could exhume the body again.”

Janosa says his research team is trying to gather as much evidence as possible to assign an identity to the body. If in the end they cannot get a DNA match, they will have to rely on the other evidence.

“I can assure you, though, that in all probability we are dealing with the grave of Georg Jenatsch,” says Janosa.

Randolph Head is an American historian of Swiss descent who has written a book about the man, called “Jenatsch’s Axe”. A student of Graubünden history, he was not at first interested in Jenatsch.

In fact he “developed rather a dislike for this unpleasant fellow who kept being given more prominence than I thought he deserved.”

Later, however, Head “got quite interested in how religious identities emerged in Graubünden and Switzerland – the sense on the part of some that they were ‘Catholics’, others ‘Protestants’, in the sometimes religiously divided villages.”

A professor at the University of California Riverside, he says that this interest “reflected my university’s complex and unusually diverse student body, who were themselves very interested in questions of identity”.

What was it that made Jenatsch so utterly ruthless – his own personality, or the times he lived in?

“Jenatsch was most certainly a man of his times – and those times were characterised by instability and a crisis of identities,” says Head. “But clearly, his personality was suited to those times, and allowed him to advance socially and economically in ways that might have been closed to him in a more tranquil era.”

Does he think the body in the Cathedral is really Jenatsch? “I see no reason whatsoever to doubt that the bones dug up in 1959 in fact were those of Jenatsch. The wounds to his skull and body conform to contemporary accounts quite closely.”

“I am pretty sure that Erik Hug – who was an extraordinarily meticulous and skilled archaeologist – got the right guy.”

He adds a thought of his own: “The remaining mystery is not who is buried in Jenatsch’s tomb, but rather who killed Jenatsch – a subject about which we can make educated guesses, but for which historical research will never provide irrefutable evidence.”

Rector of Chur Cathedral Reverend Harald Eichhorn says: “I assume it’s Jenatsch in the grave. They have always been pretty sure.”

The body was not removed from the Cathedral for long, he says.

“They have already brought him back and buried him again. I made sure, when the grave was being sealed, that I said prayers over it and blessed it – that was the right thing to do.”

About Jenatsch himself the priest says: “He certainly was a highly ambivalent figure. A man of extremes. A politician, a clergyman, a soldier – even a terrorist. But he is an important figure for Graubünden, just about as important as William Tell for the rest of Switzerland.”

Does he deserve to be buried in Chur Cathedral?

“In the old days it was the custom to bury important people of all sorts in the cathedral,” Eichhorn explains. “So many people are buried here – not only bishops and clergy, but also what we would now call politicians – and whether they all deserve to be here is a moot point. But since Jenatsch has been here for so long, I just think: let him rest in peace!”