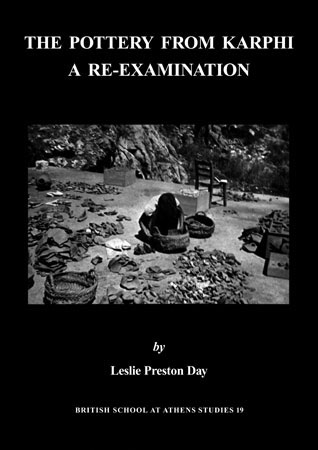 Leslie Preston Day, The Pottery from Karphi: A Re-Examination

The site of Karphi, high above the Lasithi plateau, remains one of the most extensively investigated settlements of Early Iron Age Greece; it was excavated by the British School at Athens under the direction of John Pendlebury in 1937-39. In the report that swiftly followed, the pottery was not presented in detail, though much was discussed in a later article by Mercy Seiradaki. Consequently, there existed serious problems in dating the remains and understanding their meaning. This volume now presents a thorough study of the Karphi pottery, much hitherto unpublished, accompanied by copious new drawings and photographs. The author’s expertise with material from contemporary Cretan sites, especially from the Kavousi excavations, provides major insights. Moreover, thanks to careful recording by the excavators and the survival of the excavation notebooks, the material can be presented here by context, which permits the date of the settlement to be clarified and its history to be re-evaluated. While early pottery appears as small fragments from under floors, streets, and courts, later LM IIIC whole vessels seem to have been abandoned on floors. The tombs continued in use long after the abandonment of the settlement. Ceramic assemblages also help to determine room and building functions, leading to a reconstruction of social practices at this key site. A chapter by Eleni Nodarou and Ioannis Iliopoulos presents the results of petrographic and SEM analyses. Thus, this study serves as a significant contribution to our overall understanding of Early Iron Age Crete.