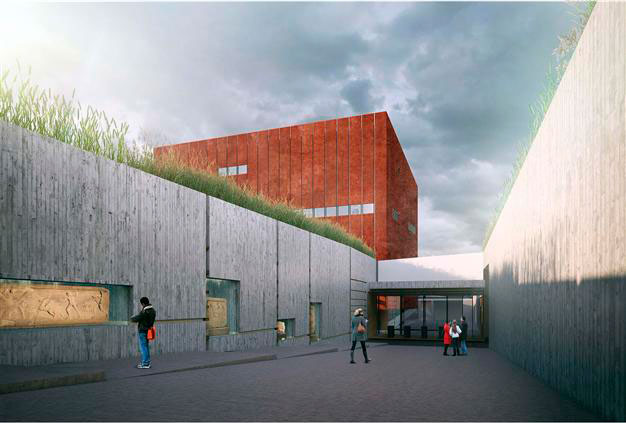 it will open to the public within one or two years

Plans have been completed for a museum at the site of the ancient city of Troy, and construction will begin before the end of this year.

According to officials, only the main building will be on ground level, while the galleries will be underground. Justice and Development Party (AKP) Çanakkale deputy Mehmet Daniş held a press conference late last week with the head of the Troy ancient city excavation team, Professor Ernst Pernicka, and deputy head Associate Professor Rüstem Aslan.

Daniş said the project was now set to go out to tender, adding that a large part of the new museum would remain underground, just like today’s Troy remains.

It is planned that only the main museum building will be on ground level, while the galleries will remain underground. People will be able to visit the underground galleries by walking through platforms instead of staircases.

“The museum project is suitable for the tissue of the ancient city of Troy and the Troy National Park,” Daniş said. “A competition was organized in May 2011 for the museum and a project was selected. Later on, the ministry awarded a contract for detailed drawings to be made, and these will be delivered to the ministry in the coming days.”

“The museum will go out to tender when the technical works are completed. The museum is expected to cost nearly $10 million. Its foundations will be laid by the end of the year and it will open to the public within one or two years,” he said.

Museum is expected to boost tourism in region

Daniş added that the Troy Museum would be a new frontier in Çanakkale’s tourism mix. “When this museum is built, we will have raised the bar in the field of tourism. After the museum’s establishment the number of visitors to Troy, which is currently 500,000, will exceed one million. Thanks to the museum, tourists visiting the ancient city will stay longer in Troy and Çanakkale, and this will boost tourism in the region,” he said.

Daniş also said the Troy Museum project would create a tremendous impression in the world. “I hope that 90 percent of the artifacts that are currently on display in different parts of the world will return to their home, Troy,” he said. This comment suggests that the Troy museum project is part of the recent push by the Turkish Culture Ministry to return artifacts that are currently located in museums around the world to Turkey.

Germany’s Tubingen University member, Ernst Pernicka, who has been leading the Troy excavations since 2005, said the museum project was the dream of German archaeologist Professor Manfred Osman Korfmann, who headed the excavations for many years before him.

“In my opinion, the Troy Museum will pave the way for many cultural and tourism dynamics. It will increase the tourism potential at the Troy National Park, and it will enable villagers to take a share in tourism revenues,” he said.

Referring to the return of artifacts to Turkey, Aslan said: “With the establishment of the museum, besides the legal process, an ethical process will begin for the return of Troy finds, which are currently located in other countries. This will also enable academics to work on Troy discoveries under the same roof. The Troy Museum will add to the prestige of both Turkey and Çanakkale.”