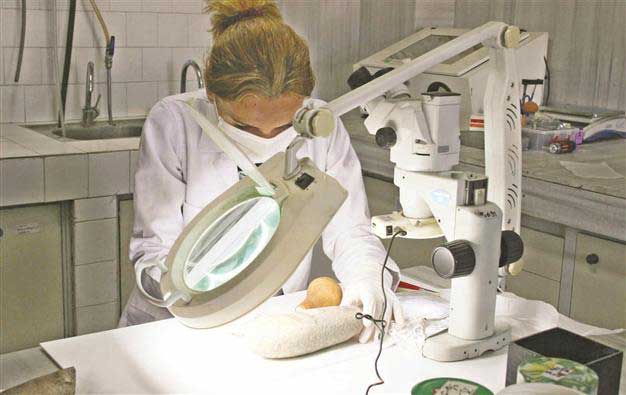 Excavations at the Körtiktepe settlement in the southeastern province of Diyarbakır’s Bismil district have revealed various types of weaving designs. Aesthetic values were very important in Körtiktepe, according to the head of the excavations, who says the community’s dead were decorated with aesthetic designs.

Researchers working at a dig at Körtiktepe in the southeastern province of Diyarbakır’s Bismil district have unearthed traces of weaving dating back 12,000 years ago, suggesting the site may have been an incubator of early textile production, according to the excavation’s head.

“The bodies, bones and objects that we have examined and the textile samples on them are not prototypes. There were many weaving techniques 12,000 years ago. There are samples of various types of designs. In previous periods, the weaving was standard. But we can see all stages of the development of weaving,” said Professor Vecihi Özkaya, the head of the Dicle University Archaeology Department and the Körtiktepe excavation. “It is apparent that textiles were developed there.”

The excavations have continued since 2000 as part of a project to rescue cultural artifacts that will be submerged once the controversial Ilısu Dam is completed, inundating a large area in Southeast Anatolia. Körtiktepe is located at the confluence of the Tigris River and the Batman Stream close to the Diyarbakır-Batman border.

Özkaya said aesthetic values were also very important in Körtiktepe, adding that the bodies of the dead, as well as pots and pans, were decorated with aesthetic designs.

Körtiktepe was a witness to many firsts, the professor said, noting that social life and many concepts regarding the concrete and abstract worlds had developed in Körtiktepe.

“The Neolithic age is when human beings made a step toward civilization. Contrary to what is believed, this year’s excavations at Körtiktepe reveal that Körtiktepe was one of the earliest-period cities. People who solved problems of nutrition and settlement lived there,” he said. Social culture was born in Körtiktepe, Özkaya said, adding that belief values were developed.

“Körtiktepe enriches what we know about the ancient ages. It also brings new approaches to what we don’t know. It shows us that Anatolia has a significant place in [cultural history]. It is possible that Körtiktepe is where civilization was born. This is a very important claim but we are working in many fields to reveal it. Now we are waiting for its results,” the excavation leader said. “It was not possible to talk about it in the past, but now we can easily say that the south of Anatolia and the north of Mesopotamia was a turning point in civilization.”

Özkaya said they had so far supplied thousands of objects for the Diyarbakır Museum and that discoveries from Körtiktepe would be the biggest locomotive to opening the museum to scientific tourism.