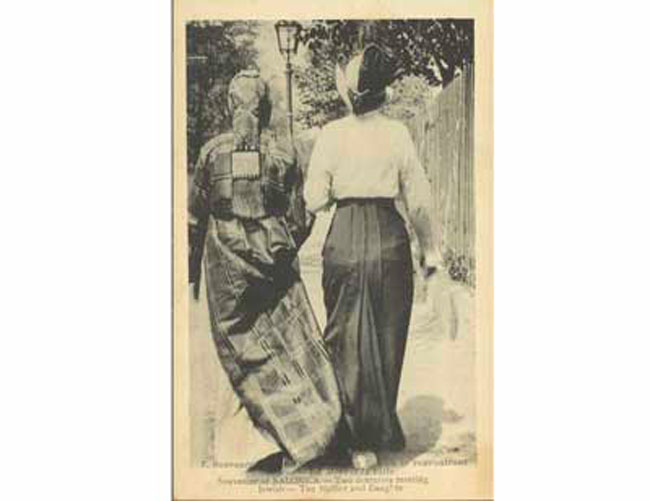 Thessaloniki: The West of East

Unknown photos and postcards of the city

An unknown until today picture of Thessaloniki, probably the oldest one of the city, and a number of exceptional postcards from the collections of Aggelos Papaioannou and the Hellenic Literary and Historical Archive (E.L.I.A.) of the National Bank of Greece Cultural Foundation (M.I.E.T.) will be featured in an exhibition opening on 26th September in the Cultural Centre of Thessaloniki.

The exhibition is titled “The West of East: The Century that shaped Thessaloniki of 1912”, a title implying that Thessaloniki becomes the most “western” of Levantine cities at the beginning of the 20th century and that, at the same time, the oriental way of living loses the battle against westernization.

As a parallel event to the exhibition, every Wednesday, a performance inspired by costumes of late 19th-early 20th century will be shown.

The exhibition concept follows the global historical context of the 19th century, a century of confrontation between tradition and modernism. Thus, in Thessaloniki of 1912 the old and the new world coexist. In the exhibition of M.I.E.T. these two worlds are represented by the two Jewish women: the mother with her traditional costume and the daughter dressed according to European fashion.

The fact that Thessaloniki of today is an entirely different city than that of 1912 or 1812 is not only due to the passing of time but also to how it developed through the historical events against the European background. That is why, in the exhibition, the history of the city is compared and shown next to what was happening in the West at the same time.

The stereotype of the “backward” Turk that Greeks of 1821 had created was mainly due to the miserable state of the territories under Ottoman rule during the 18th century – always in comparison to what was happening in Europe. Later on, however, in the 80 years that passed from the formation of the Greek State until the liberation of Macedonia, Thessaloniki would experience a totally different Ottoman Empire. The reason for this was that during the reign of the last Sultans a modernization of society and state was attempted, in order that the country could be considered as a Western one.

Many innovative measures were applied in Thessaloniki for the first time. The city, as widely known, had a multi-ethnic population (Jews, Turks, Greeks, Levantines), and a progressive character. So, it offered a more fertile ground for experimentations than the conservative Istanbul of the Sultans. Thus, many changes the city experienced in the 20th century under Greek government, had already been introduced under Ottoman rule in the 19th century. Thessaloniki may have delayed in entering the modern era, but it transformed rapidly into the well known cosmopolitan, for the natives, exotic for Europeans, Belle époque town, modernizing its character in every aspect: it has known radical changes of the urban tissue, the economy, the trade, the manners and customs, and witnessed the flow of war immigrants, the population exchange, and the Holocaust, which totally altered its population.

Ioannis Stefanidis is the historical advisor, and Giannis Epaminondas is the curator of the exhibition.