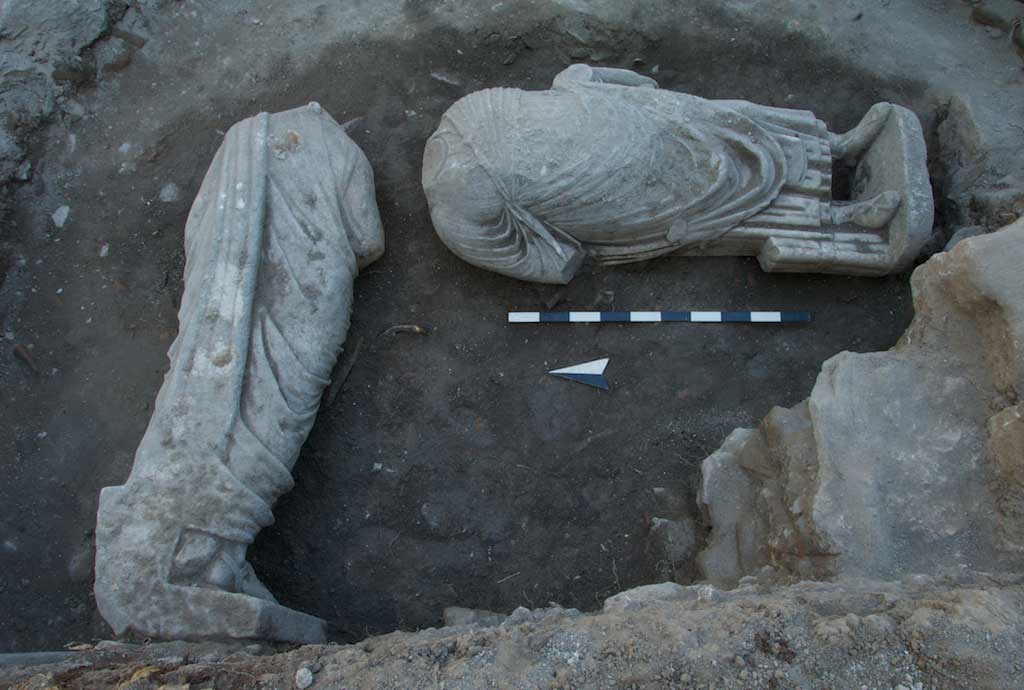 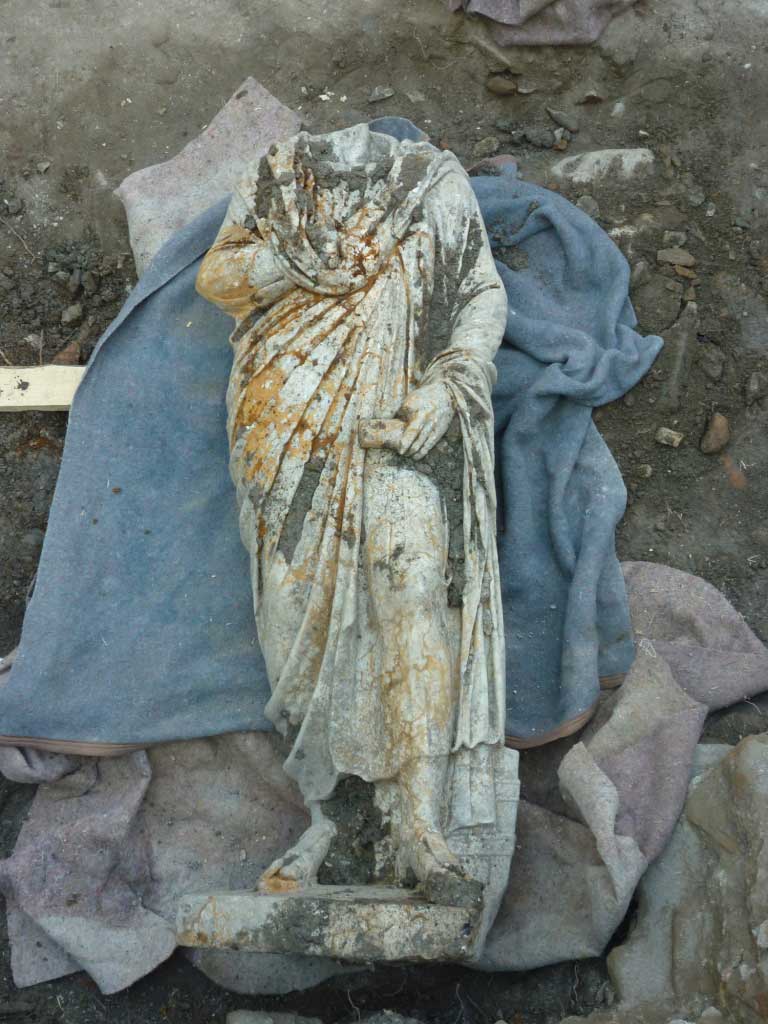 The speaker and the governor

Two headless Roman statues have been discovered holding up a medieval-era platform in Turkey — an example of antiquities being reused by later generations as humble building material.

The ancient statues have lost their heads, but their clothing suggests that one was a representation of a local notable and the other an imperial office-holder, said R.R.R. Smith, who directs the New York University Excavations at Aphrodisias, an ancient Roman city in what is now Turkey. One statue dates back to about A.D. 200, while the other is from A.D. 450 or so. They were likely recycled by the 600s, Smith told LiveScience.

“Preliminary study of the pottery associated with the deposition of the statues suggests they were built into the platform already in the seventh century,” Smith said. “That is, in the immediately ‘post-antique’ early medieval period.”

Aphrodisias was near a marble quarry, and its statuary art flourished between about 30 B.C. and A.D. 600, during the era of the Roman Empire. Since 2008, Smith and his colleagues have been excavating “Tetrapylon Street,” a city boulevard that ran from the city’s sanctuary of the goddess Aphrodite to a major temple called the Sebasteion. The dig has turned up signs of what Smith called a “major conflagration” — collapsed columns, broken glass, fragmented mosaics and burned wood all in a chaotic mix. In August, archaeologists excavating above this layer of destruction found a built-up platform with two headless statues, positioned at a right angle from one another, used as a foundation.

The speaker and the governor

The near life-size statues probably lost their heads before they were repurposed as building material, Smith said. But even without faces, the statues tell a tale. The first, the one likely sculpted around A.D. 200, wears a cloak and tunic, the uniform of a notable citizen. The man was sculpted in a rhetorical posture, his right hand gesturing as if in mid-speech and his left hand grasping a carved scroll so detailed that the spiraling rolls of papyrus are visible.

“This is a precise and unusual detail,” Smith said. “The subject was probably a member of the local elite represented in the posture of an engaged public speaker — he is animated and committed, but also disciplined and self-controlled.”

The second statue, dating to a few hundred years later, wears a toga and laced boots and represents a high-ranking imperial officer, likely a provincial governor, Smith said. Unusually, the man is depicted in individual detail rather than a standard body type: His belly is large and his chest is broad and barrel-shaped.

From art to rubble

The ruins of Aphrodisias are well preserved, Smith said, so it’s possible that the heads are somewhere in the rubble, waiting to be found. The statues are striking for their detail and craftsmanship, he said, but they also point to how prolific the sculptures of Aphrodisias were.

“Their context in the probably seventh-century platform is striking testimony to when such statues that had earlier proliferated in the ancient city changed, in local perception, from treasured public monuments to useful, heavy-duty building material,” Smith said.