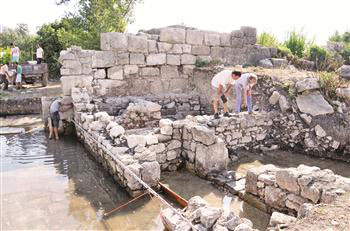 Archaeological teams digging in the ancient city of Limyra in the Mediterranean province of Antalya have announced the discovery of a second synagogue from the Lycian civilization.

Researchers initially thought the house of worship was a glass furnace, according to the head of the excavations, Dr. Martin Seyer of the Austrian Archaeology Institute. “We first found a bath and a menorah. After some [further] investigation, we found out that it was a synagogue,” he said.

Second synagogue in the Lycian city

The synagogue in Limyra, which is located in Turunçova in Antalya’s Finike district, is the second to be found in the historical Lycian region after one discovered in 2009 in the ancient city of Myra in Antalya’s Demre district. Limyra was the former capital of the Lycian Federation, which some have called the first democratic union.

“We have excavated a small part of the synagogue field, but we think that the synagogue was on a very large field,” he said, citing the relevant law under Emperor Theodosianus that only permitted the restoration of existing synagogues rather than the construction of new Jewish houses of worship. “There was a wide and rich Jewish group of people living there. The synagogue is a very important discovery for Jews and the ancient city of Limyra. Thanks to this synagogue, we have chance to see the Limyra excavations and its history.”

Excavations will continue in the area around the synagogue next year, Seyer said, adding that the ancient city would attract many more tourists once the archaeological work is complete.